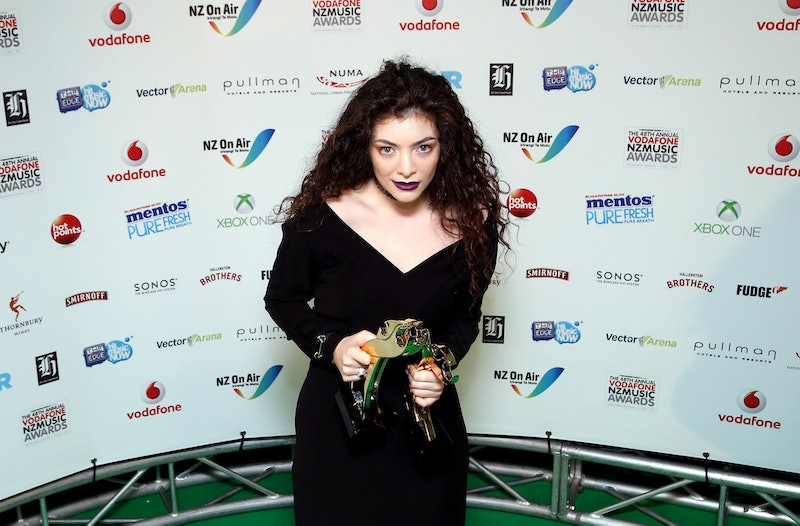 As a 17-year-old international superstar with multiple Grammys and a slightly eccentric sense of style, it was only a matter of time before Lorde made her debut in Vogue. The "Royals" singer and entertainment sensation was interviewed and photographed by the fashion magazine for its March 2014 issue.

Known for floor-length dresses, maroon lipstick, crazy manicures, and a whole lot of dark colors (and I thought I wore a lot of black), the singer's sense of style certainly doesn't conform to the "young, female pop singer" stereotype. Even though Lorde may be friends with Taylor Swift, it's safe to say that the two are not sharing clothes. Ever.

When asked of her fashion influences for her Vogue spot, Lorde stayed her usual "way cooler than we were at 17" self, naming designers like Miu Miu, Moschino, and Simone Rocha as favorites.

Even though to many, Lorde's personal sense of style might seem a little... scary, the singer explained her clothing choices to Vogue in a way that showcased her staggering maturity.

[The] kind of clothes that I've found I like to wear over the past six months have been all the things that make me feel powerful and strong ... I wear a lot of pants. I wear a lot of long, structured dresses.

For the photograph, Lorde wore a mint blue/green, beaded Miu Miu dress, accessorized with a simple flower crown. A big departure from her usual dark ensembles, Lorde looks every bit of the insanely mature, fashionable superstar that she has become in the past year. And not scary at all. While Lorde named off many influences for both her style and music in her Vogue interview, she said she still wasn't totally comfortable with the idea of becoming a role model herself.

There's a fine line between a role model and preaching to people. I never want to tell anyone how they should be, especially not people my age. But, that being said, I'm conscious of the fact that people my age are reading what I say and listening to what I say, and that's cool — particularly for the girls who are into what I do.

While the 17-year-old sensation may still be slightly unsettled with the idea of being an influence to young people, there's something to be said for teenagers and young adults having a different, self-assured individual to look up to. In an entertainment industry when stars often dress and perform in a way that is anything but unique, Lorde stands out because she is entirely herself. And if that's not something to look up to, I don't know what is.