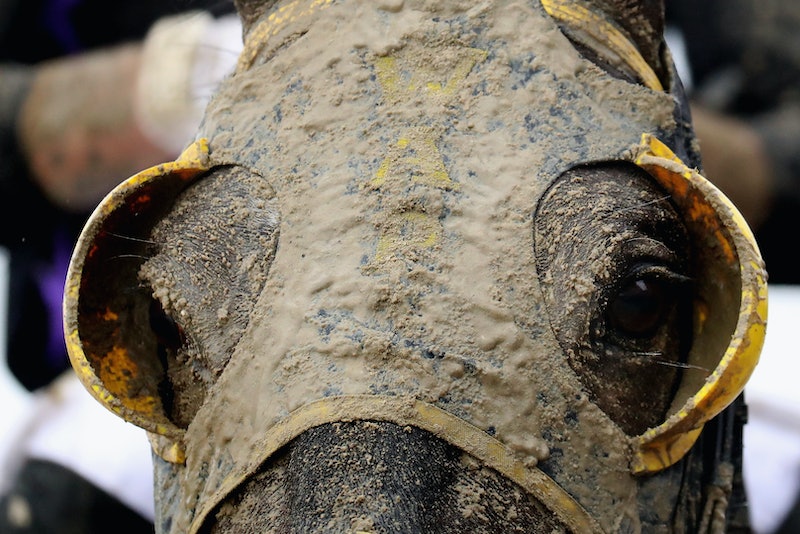 A steady rain and dreary gray skies hung over Pimlico Race Course on Saturday as Preakness, the second leg of the Triple Crown, kicked off in Baltimore, Maryland. And the tragic deaths of two racehorses running in the Preakness undercard races rolled in like a dark cloud to cast an even grimmer shadow over the day shortly after the event got started. Homeboykris died shortly after powering his way up through the pack to barrel across the finish line in first place, while Pramedya collapsed in the fourth race with a bad break to a front leg and had to be euthanized due to the severity of the injury.

Despite the rain and muddy track at Pimlico Race Course, Saturday seemed to be a great day for Homeboykris. The 9-year-old gelding and former Kentucky Derby runner had managed to break out from the back of the pack in the final stretch of the first race of Preakness to win by a half-length. Shortly after posing for a picture or two in the winner's circle, however, Homeboykris, collapsed and died while walking back to the barn. Chris Campitelli, the son of Homeboykris' trainer, Francis Campitelli, said the racehorse had "died from apparent heart attack on walk back to barn" when he announced the news over Twitter.

It was a devastating end for a horse with a lengthy career and is likely to renew debate over how old is too old for a racehorse. Homeboykris had won 15 of 64 starts, including the Grade I Champagne in 2009. He is scheduled to undergo an autopsy at the New Bolton Center Hospital in Pennsylvania, the Baltimore Sun reported.

Tragedy struck again in the day's fourth race when 4-year-old filly Pramedya collapsed and broke her mid-cannon bone on her front left leg, tossing her jockey in the process. Due to the severity of the injury, Pramedya had to be euthanized on the track, according to Kentucky's Courier-Journal. Daniel Centeno, Pramedya's jockey, was treated at a nearby hospital for a broken clavicle, the paper reported.

The tragic start to this year's Preakness has been a grim reminder of the dangerous risks in horse racing. As the horse world mourns the sudden loss of Homeboykris and Pramedya, the races continue in Baltimore. Kentucky Derby winner Nyquist is expected to run in the Preakness Stakes at Pimlico later today. Winning the race would put the thoroughbred that much closer to nabbing the elusive Triple Crown.