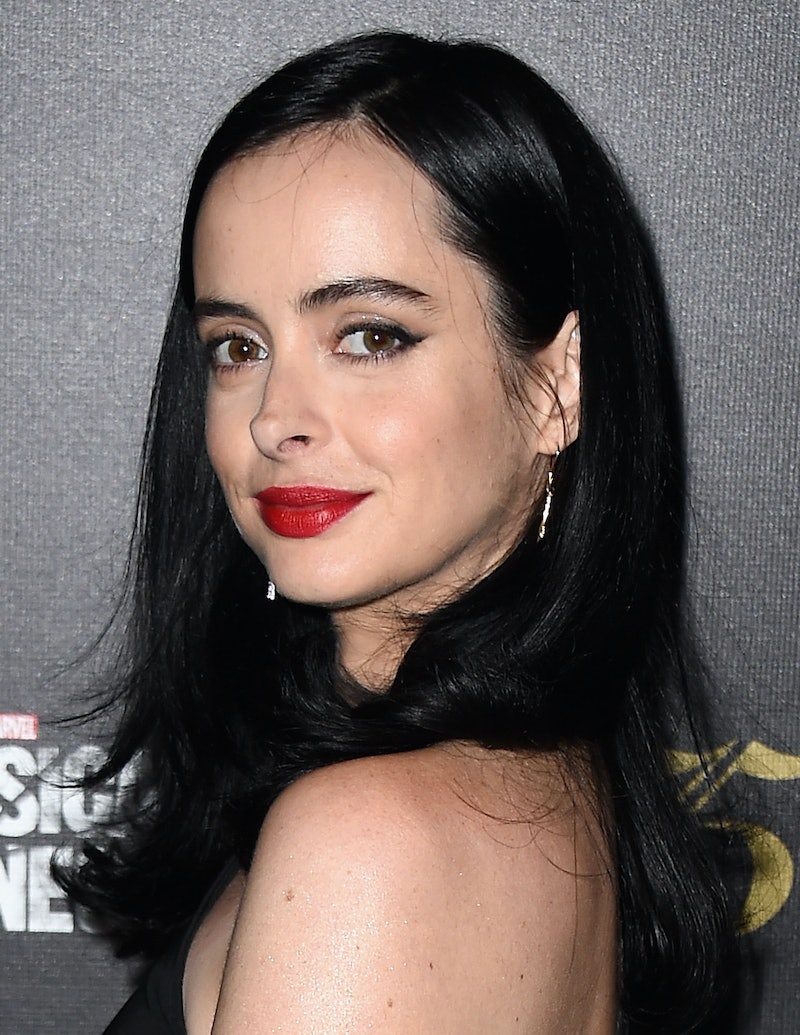 It turns out that Jessica Jones star Krysten Ritter isn't just fighting the forces of misogynistic evil onscreen, but offscreen, too. While on The Late Show, Krysten Ritter commented on the controversy that emerged earlier this week, when Iron Man 3 writer/director Shane Black claimed that the film had originally had a woman as a villain, but were forced to change the gender of the character to sell more toys. (Bustle has reached out to Marvel about Black's claims, but has not yet heard back.)

Black told Uproxx, “There was an early draft of Iron Man 3 where we had an inkling of a problem, which is that we had a female character who was the villain in the draft. We had finished the script and we were given a no-holds-barred memo saying, ‘That cannot stand. We’ve changed our minds because, after consulting, we’ve decided that toy won’t sell as well if it’s a female.’ So we had to change the entire script because of toy making.”

Upon hearing the story, Ritter interrupted Colbert and said, "Really? Oh my god, I didn't know that. Girls can sell toys." When Colbert pressed her on whether or not there's a Jessica Jones toy in development, she responded: "I don't know if there is yet, but there should be. It would sell huge and I'm going to make some phone calls after this."

While Ritter doesn't come out and say that a Jessica Jones toy would be a tool for feminism, I'm pretty the effect of such a toy is implied. If girls and women are taken seriously as action heroes by being made into toys that then sell, then feminism wins and children can see that gender doesn't have to constrict what role you play in the world. And, if you think about it, the situation feels a bit like a metaphor for Jessica Jones itself. As Ritter mentions in her interview, the series isn't just about a 2D superhero:

Jessica Jones has a very traumatic past. She’s a survivor of rape and abuse. But her journey throughout the show is her not letting that define her. Everything that happened to her…she still muscles through and finds her full potential and conquers the guy who abused her.

This is where the show's emotional heft lies. Jones kicks ass, and though there are endless action scenes, the real focus of the series isn't Jones as superhero, but Jones as a human with feelings. Critics like The Guardian's Lili Loofbourow, The Mary Sue's Kia Groom, and Bustle's own Amy Roberts have applauded the series for its dedication to a realistic depiction of a rape survivor (Jones). Like the idea of a Jessica Jones toy, the series uses the comic book and action heroine appeal to draw people in and to engage with a topic that's worthy of their time: how abusers can subtly manipulate the people they abuse.

So please, Hollywood: you've given us an action heroine who's not just super heroic, but superhuman and who embodies issues that sadly many women can relate to. Don't pull a 180 when it comes to the production side of your business — put your money where your mouth is and produce your first feminist superhero toy.