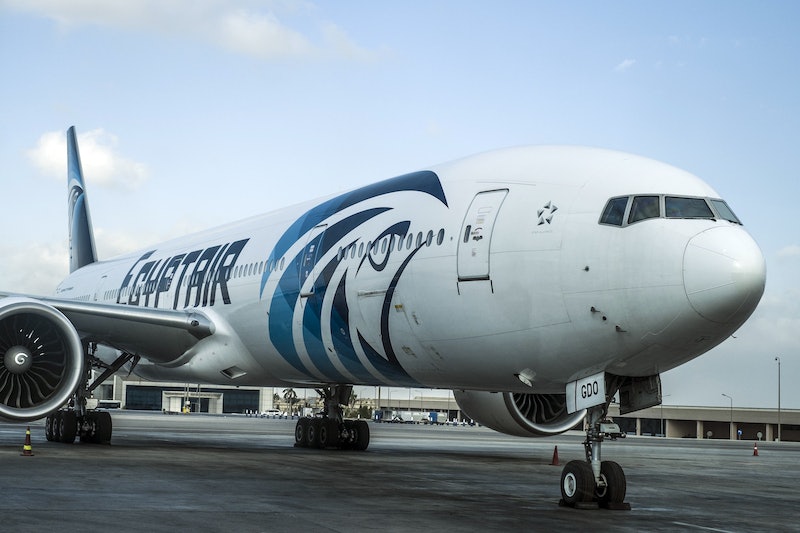 EgyptAir security officials claimed the airline had been vigilant about responding to potential security threats since political tensions had spiked in Egypt following the Arab Spring. But the EgyptAir jetliner that crashed was once reportedly the target of graffiti, an exclusive report by the New York Times revealed Saturday. The Times called the incident, which happened roughly two years ago, "an eerie coincidence."

Speaking anonymously, three EgyptAir security officials told the Times in separate interviews that political vandals had once graffitied, "We will bring this plane down" in Arabic on the underside of the Airbus A320 jetliner. But it seems an irresponsible leap — one the Times did not take — to speculate the incident may be in some way related to Thursday's crash. Especially because the graffiti was allegedly accompanied by the words "traitor" and "murderer" in reference to Egypt's president Abdel Fattah el-Sisi.

According to the Times, the incident in question was one of several episodes of vandalisms that occurred at Cairo's airport over the span of two years following the ousting of the country's first democratically-elected president, Mohamed Morsi. At the time, airline officials reportedly interpreted the incident "as a sign of the country's bitter political divide rather than a directed threat against the plane."

It's unclear from the Times report, however, if investigators or airline officials are reconsidering this incident, which was allegedly credited to aviation workers at the airport, as having a connection why EgyptAir Flight 804 crashed into the Mediterranean Sea while flying from Paris to Cairo early Thursday.

As Egyptian Armed Forces released photos of the first pieces of debris recovered from the wreckage of Flight 804 just north of Alexandria on Saturday, investigators said they had yet to uncover what had happened on board the plane to cause it to crash but were beginning to piece together clues. Although misinformation plagued early reports about the suspected crash — airline officials jumped the gun Thursday, wrongly claiming debris found that day belonged to EgyptAir Flight 804 — investigators have recently steered clear of speculating about what might have caused the plane to make a series of erratic turns before plunging thousands of feet and disappearing from radar screens. And the media would do well to follow suit.

Certainly it would be invaluable to know what happened on board EgyptAir Flight 804 that caused it to crash and why. But factual information should always take precedent over speculation and armchair analysis. Because if we've learned anything from MH370 it's that aviation accidents are rarely solved in a day.