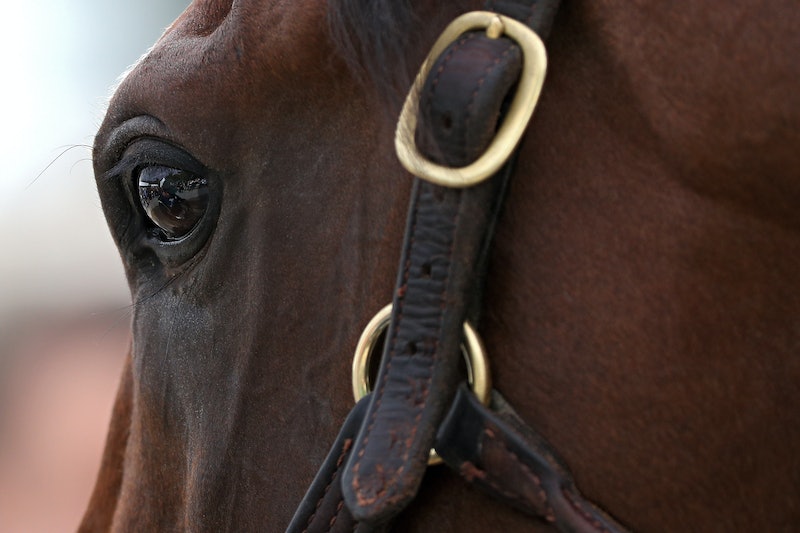 On Saturday, the world of horse racing will see the second installment of its hallmark trio ― the Preakness Stakes, the second leg of racing's vaunted Triple Crown. And, following a victory in the Kentucky Derby weeks ago, the biggest story heading into the race will undoubtedly be if Nyquist, the undefeated 3-year-old, can keep his trainers and owners' Triple Crown hopes alive with a win at Pimlico Race Course in Baltimore, Maryland. So, what are the chances Nyquist wins Preakness Stakes?

You could've easily guessed that he'd be up in the pack, considering that he's never lost a race, and has all that positive perception of momentum after winning the Derby. While he was the odds-on favorite to win early on Saturday, however, that didn't last ― as it stands at the time of this writing, Nyquist has slipped from the top slot to second at 2-1 odds, behind Stradivari, a horse which didn't even run in the Kentucky Derby, at 4-5 odds.

According to CBS Sports, the late change-up in the odds was caused by a particularly massive bet coming in on Stradivari, which pushed the relative unknown to the head of the field. Exaggerator, also considered a strong contender, has slipped to third.

So, is Nyquist likely to score the victory, defying the betting odds? A brief glance back through the history of Triple Crown races shows that it's actually a considerable challenge. Since 1875, the first year all three races were run, only 32 horses have successfully won both the Kentucky Derby and Preakness. In recent years, however, it's become much more common ― since 2000, it's happened seven times, a testament to just how heavily modern American horse racing revolves around these three events.

If Nyquist manages to win Saturday afternoon and complete the Triple Crown's second leg, whatever else happens after, it'll be quite the feat. In 2014, California Chrome won both the Derby and Preakness (before losing to Tonalist in the Belmont Stakes) and American Pharoah did the same, ultimately winning the first Triple Crown in decades. If Nyquist gets as far as winning the Preakness, he'll have a shot at joining with American Pharoah for back-to-back Triple Crown wins, something the racing world has only seen one other time, in 1977 and 1978 with Affirmed and Seattle Slew, respectively.

If you're interested to watch it for yourself, the race will be going down on Saturday evening at 6:45 p.m. ET. It's worth considering that sometimes bad things happen in these events, however ― the wet, muddy track conditions at Pimlico have looked hazardous early on, and two horses have already died during earlier races, one due to a broken leg. It's a grim and important reminder of just how dangerous racing is for the horses that are forced to participate, even amid all the hoopla and excitement.