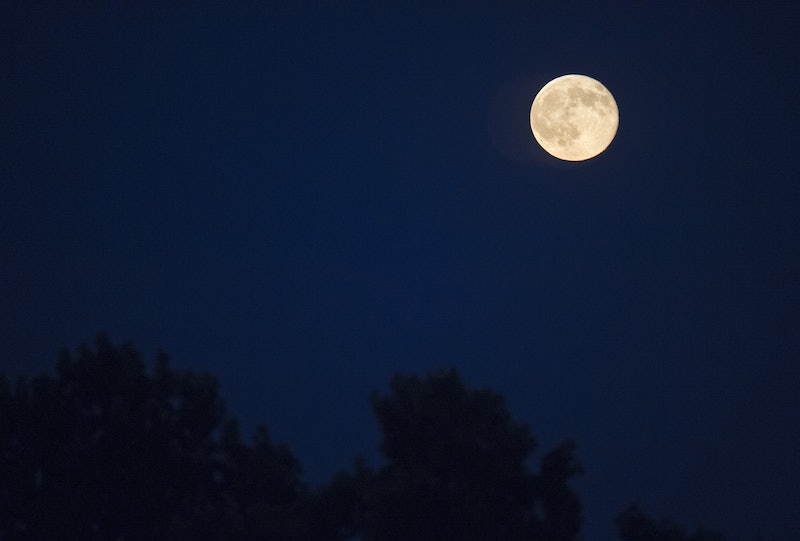 On Saturday night, any fans of atypical astronomical sights are in luck, because something's going to happen that won't occur again for more than a year ― it's the first and only Blue Moon of 2016, lighting up the night sky in all its exquisite fullness. But if you've never heard that term before, maybe you're scratching your head right now, wondering "what is a Blue Moon?"

For what it's worth, you wouldn't actually need to know what it means to enjoy it ― big, beaming full moons are beautiful under any circumstances, whether it's a moon-of-note or not. But here's the basic idea: "Blue Moon" is actually commonly used to refer to two different phenomenons, either the second full moon in a single month, or the third full moon out of four in a single season. The kind of blue moon that'll be happening on Saturday is of the second variety, as it'll be the third full moon of spring, with the fourth due on June 20th.

And, before you suffer any disappointment, you should know that there is something pretty misleading about the moniker. Namely: a Blue Moon isn't necessarily blue. Sometimes the moon can appear blue by virtue of atmospheric conditions, and it's quite beautiful when it does. But that's not what "Blue Moon" refers to ― it's about when the full moon rises to the sky in relationship to the months or seasons, not about what it looks like.

Now, make no mistake, if you're the kind of person who regularly makes a point of checking out the moon when it's full, you might be a little underwhelmed by this, because it isn't actually meaningfully different from a normal one ― it's just that it's an extra full moon within a set stretch of time. That said, though, if you've done enough moon-gazing to feel underwhelmed, you're probably the kind of person who enjoys it for its own sake.

So, planning on checking it out? All you'll have to do is simply turn your eyes to the skies tonight. That'll obviously depend on the weather conditions wherever you are, but even if you can't glimpse it yourself due to cloud cover, you can check it out online. Remember, this is your last chance to see a seasonal Blue Moon until January of 2018, and more to the point, it's a chance for a pleasant little bit of nighttime idleness. So do yourself a favor and make a little time tonight to check it out ― you only get so many, after all.