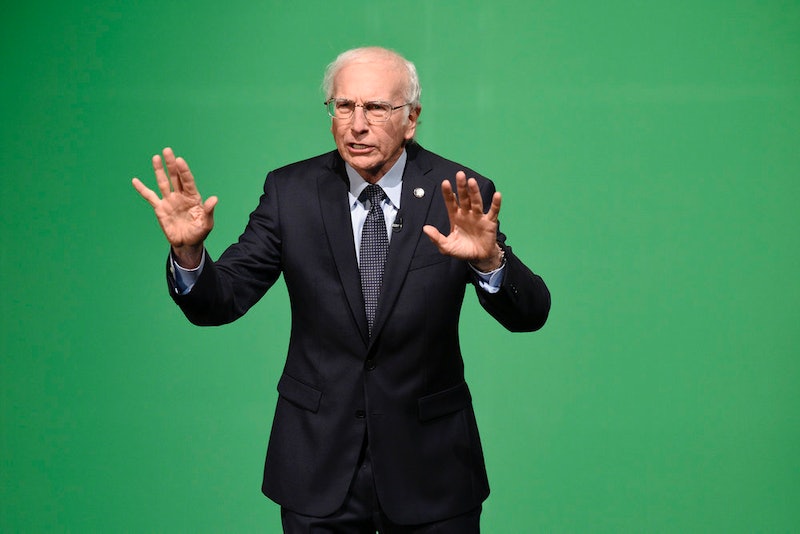 If there's one thing this season of Saturday Night Live will be remembered for, it's Larry David's impression of Bernie Sanders. If Sanders is out of the political eye by the time next season rolls around, it'll be sad not to have David's blend of Bernie plus old man to kick around anymore. So, when Fred Armisen hosted the season finale of SNL on May 21, David reprised his Bernie impression — possibly for the last time.

The sketch started with Kate McKinnon's Hillary Clinton, drinking alone in a bar and toasting her primary successes.When the bartender says it's last call and that everyone has to come home, the camera moved to David's Bernie sitting in a cushy chair over in a corner. "I'm not going anywhere," he said. "I can stay here as long as I want. It's not over until I say it's over." Clinton responded with her own double entendre. "I didn't see you sitting behind me—so far behind me you'll never catch up," she said. The sketch continued with the two of them trading barbs about the election. Clinton said she had a cushy job lined up for Sanders after the election. "How would you like to be the senator from Vermont?"

After that, the sketch took a turn for a surreal. The two candidates decided to do one semi-sweet last dance together. McKinnon and David waltzed through the audience and onto backstage, where the rest of the cast was waiting in tuxedos. The sketch finally ends with Clinton pushing Sanders into an elevator and pressing the button so he disappears (and into a thick veil of fog — I said it was surreal).

It's crazy to think that one of these impressions will be outdated by the time Saturday Night Live returns in the fall. Well, the show has been making fun of Clinton since the '90s, so she's unlikely to leave the show's repertoire of impressions any time soon. But David definitely brought a zany energy to his Sanders impression, and that will certainly be missed if Sanders fades from the public eye come fall.