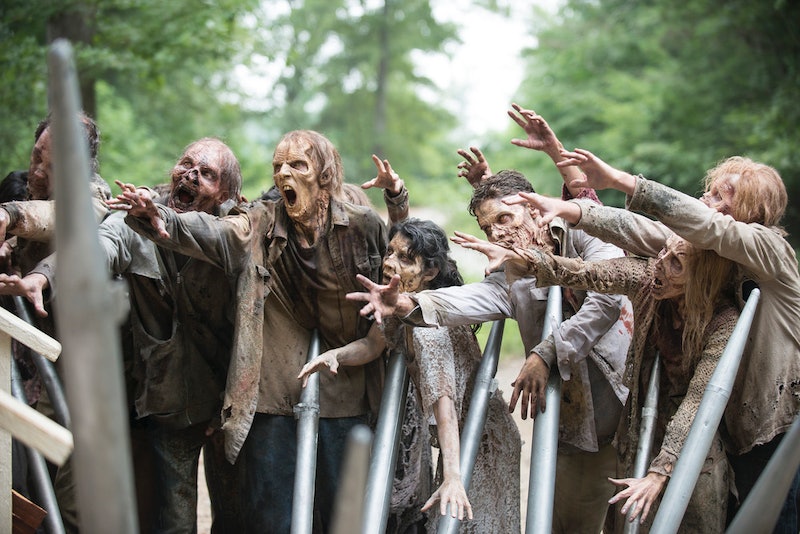 If you're a fan of The Walking Dead and currently have Fourth of July plans, cancel them immediately. There's a matter far more pressing for you to attend to. As Entertainment Weekly reports, a Universal Studios Walking Dead attraction will be available to the public in just a few months' time, and it looks amazing. Seriously, if you're a fan of the show, you have to attend, because, what better way to channel your Walking Dead withdrawal than to experience being under the duress of the undead for yourself?

If you want to get yourself extra pumped, you should hear what a journey through the attraction entails. It sure sound like they pulled out all the stops for this. Relays EW,

The new Walking Dead attraction remains a walk-through experience but has been revised and re-envisioned as an enhanced maze with recognizable props and locations from the show. Horrifyingly enough, it’ll boast a combination of actors in make-up and animatronic walkers.

I mean, if nothing else, can you imagine the golden Snapchats you'd get out of this? Picture the zombie face swaps, the zombies in flower crowns, the zombies with puppy faces — the possibilities are endless. But, let's be real. If you're going to this, you're going for more than a great social media opportunity (though the idea is enticing, I know). You're going for the experience, which you can catch a glimpse of in the video, below:

The thing is though, you need to be prepared before having such an amazing experience. Here are seven things you need to prepare for your very own zombie invasion.

1. Secure A Motorcycle And/Or Getaway Car

To get you out of tough spots quickly. Like, if a zombie is gnawing off your friend's arm, you should hop on and ride away to safety.

2. If You're Bringing A Child, Take An Obedient One

3. Have Michonne On Speed Dial

4. Make Sure You're With Trustworthy Friends

You never know who is going to betray you and sacrifice you to a walker to save themselves.

5. Be Aware Of Your Surroundings

Getting caught off guard is a rookie mistake... and a fatal one.

You're going to need sustenance to survive. Plus, amusement park food is so expensive.

Don't worry, you've got this.