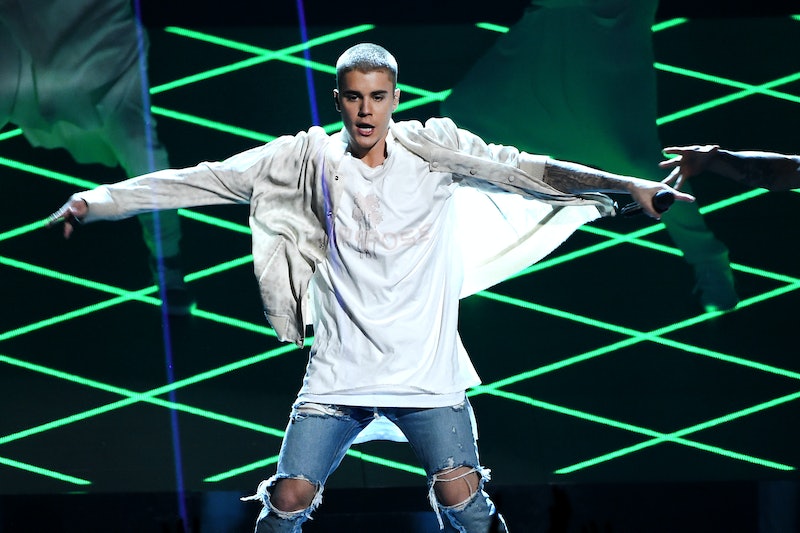 Justin Bieber is still riding high on the success of his comeback album Purpose, released late last year. His hit songs "Love Yourself," "Sorry," and "Where Are U Now" with Skrillex and Diplo have been ruling the Billboard charts, so it's only appropriate that Bieber performed at the 2016 Billboard Music Awards on Sunday night, belting out "Company" and "Sorry" for an adoring audience. Billboard reported last month that that Bieber would sing a medley of the tunes while at the show, and as viewers of the performance saw, it was worth the wait.

The performance began with Bieber crooning "Company" in a hypnotic sea of lights on the stage. Think Drake's "Hotline Bling," but with blue and red lights flowing around the stage. If you look close enough, you can see Biebs and his dancers getting down to the song on stage. As he begins "Sorry," the stage gets lighter and the singer parades around with the dancers and he debuts what looks like a new buzz cut. This is new — where did Biebs' hair go? Was it the light or is Bieber getting ready for summer with less hair? Either way, Biebs kills both songs with what could be a brand new hair cut. Check out part of the "Company" performance below.

Last year, "Where Are U Now" became Bieber's first No. 1 single on the Billboard charts, and that was followed by his Purpose tracks "Sorry" and "Love Yourself," which topped the charts. I really hope that the singer's Billboard performance helps "Company" pick up momentum, because I happen to think the track is the best one on Purpose, but that might be just me. The album from the former teen pop king represents a new more mature Bieber, who has been through the wringer of media scrutiny, several breakups, and many youthful indiscretions. It's a sound that has certainly resonated with his fans and listeners everywhere — including at the 2016 Billboard Music Awards.