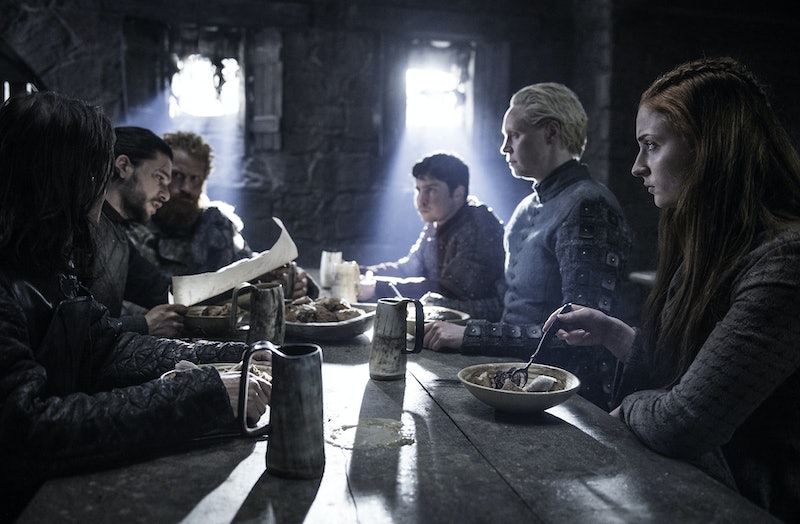 Guys, in case you aren't convinced that the chemistry that we all felt between Brienne of Tarth and that Wildling stud muffin, Tormund Giansbane was real last week, I am here to validate you. It's realer than the Many Faced God. According to TV Guide, the episode's director Dan Sackheim confirmed that Brienne and Tormund's moment on Game of Thrones was intentionally giving off super sexy vibes. Thats right, a Brienne and Tormund relationship might be happening. Sound the alarms.

The director told TV Guide that the flirtation is clearly one-sided at the moment, with Brienne silently rebuffing Tormund's slightly hilarious advances, but this could (and should) certainly change. On Sunday, Tormund legitimately almost jumped out of his furry Wildling coat while leering at Brienne from his horse. It was oddly adorable, and I couldn't root harder for this to happen. Sure, Brienne played the coy game while talking to Sansa about "that Wildling fellow, with the beard" but we have all been there. I know I have pretended to be horrified by someone's crush on me but secretly loved it. I'm sure Brienne will come to the light and realize that Tormund is amazing. People are 'shipping these two lovebirds way too hard for this not to happen.

After what we had to endure with Hodor tonight, I think the showrunners can throw us a bone here and give us Tarthbane. We have earned it, right?