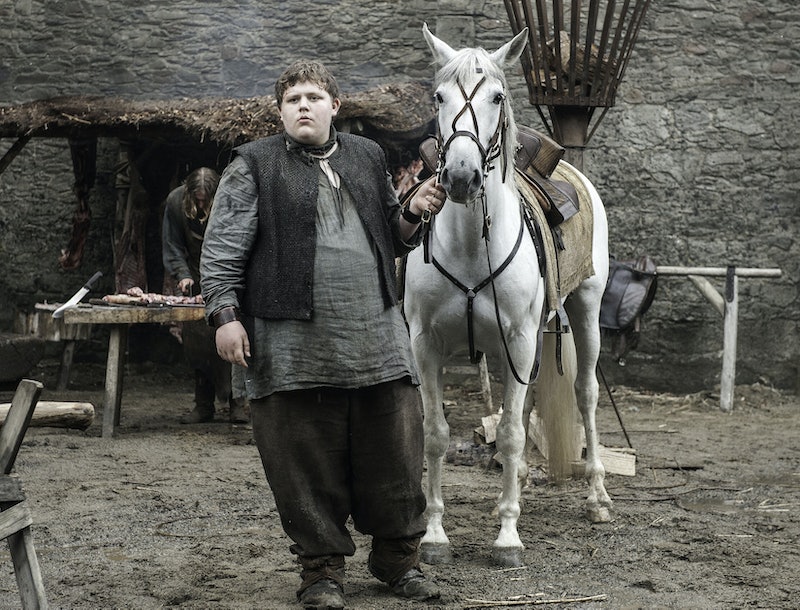 On Sunday, Game Of Thrones really hit us all right in the heart. It's safe to say that Hodor is a pretty universally beloved character and unfortunately, that's usually exactly what it takes to be snuffed out on this show. Well, this week our beloved Hodor died on Game of Thrones while holding the door (as he was instructed) against a massive army of White Walkers. This is also exactly how we finally discovered Hodor's backstory, and it's absolutely heartbreaking. Basically, Bran warged into Hodor in a vision in the past, making his brain short-circuit and turning him into the Hodoring Hodor we know in the present.

First off, though, Bran made a pretty epic mistake getting himself touched by the Night's King in a vision. The Night's King apparently leaves an icy mark on everyone he touches, which he uses to track you down and destroy you with his entire army of undead freeze pop people. The army found Bran in the cave of the Three-Eyed Raven and all hell broke loose. While Meera and Hodor desperately tried to fight them off and get out of the cave, Bran was vision hopping back to Winterfell where he caught sight of a young Hodor again. Meera yelled to Bran to warg into Hodor for help and he did it while still in his vision. Once Meera wheeled Bran out of the cave, she yelled for Hodor to "Hold the door." She yelled it over and over again while Hodor held the door against the White Walker army. Young Hodor is seen repeating, "Hold the door" over and over in Bran's vision. Hodor eventually fell over in a seizure of sorts in the vision, repeating the phase until it morphed into "Hodor" and became the only thing he could say.

Oh, and then Hodor died holding the door in the present day, so basically he spent his whole life repeating the line that would ultimately be his undoing. So, yeah, we know the answer to what Hodor means and how Hodor came to be, and it's all Bran's fault. Poor Hodor. You deserved better.