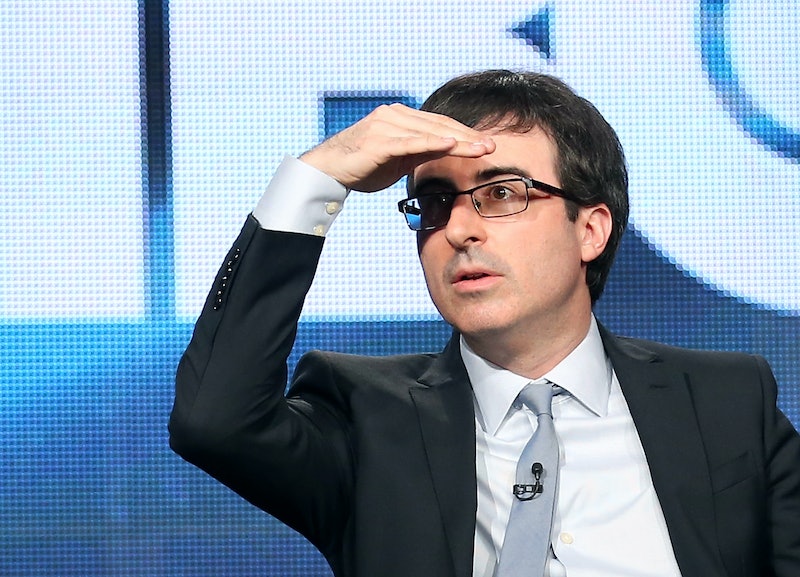 In his May 22 episode of Last Week Tonight, John Oliver slammed the presidential election process and offered a compelling way to help fix the rigged system in one fell swoop. Specifically, Oliver talked about "the electoral foreplay that we've been engaging in since February," otherwise known as the nation's primaries and caucuses.

These strange and often confusing contests help select each party's presidential nominee ahead of the November general election. Both primaries and caucuses allow state residents to cast their votes in favor of their preferred presidential candidate. However, as Oliver pointed out, each state's delegates have a lot of power over which candidate eventually becomes the nominee, despite how the people vote.

For example, although Donald Trump won the Louisiana Republican primary and beat Ted Cruz by more than three percentage points, there was a possibility of Cruz winning 10 more delegates than Trump. Both Trump and Cruz were allotted 18 delegates each, but because of GOP delegates rules, Cruz's campaign was allowed to try to sway 10 additional delegates (five from Marco Rubio's failed presidential run and five unpledged delegates). In the end, Trump walked away with seven more delegates than Cruz.

So basically, as one North Dakota delegate said in a video clip on Last Week Oliver, "The delegates at the convention choose the nominee, not the voters in the primaries."

And that one revelation perfectly sums up the flawed system behind presidential primaries and caucuses. But the thing is, although many people (like Trump who actually threatened to sue the state of Louisiana) recognize the problems with the way we elect presidential nominees in the U.S., most people don't really do anything about it.

That's why Oliver proposed to have everyone disenfranchised with the electoral process write a letter to the head of each party's chair on Feb. 2, 2017, asking them to change our presidential election system. That proposed date is Groundhog Day, which Oliver said is appropriate — because if we don't fix the problem now we'll be "destined to live through the same nightmare scenario over and over again until the end of f*cking time." And, really, Oliver made his most compelling point when he said that there's no better evidence of our flawed system than when Trump is actually making sense and acknowledging the problems with our electoral process, too.

In a nation that prides itself on its democracy, the presidential primaries and caucuses really don't honor that thinking when the people's votes don't always translate to delegates, which, ultimately, lead to a nomination. This year, as Oliver noted in his segment, "Party nominees will coincidentally be the people with the most votes." Oliver pointed out that likely Democratic Party nominee Hillary Clinton led Sanders by more than 3 million votes and Trump led by nearly 4 million votes.

So do as Oliver says and set a reminder for Feb. 2, 2017, when you should write a (polite!) letter to DNC Chair Debbie Wasserman Schultz or RNC Chair Reince Priebus asking them to finally change the weird rules of our primaries and caucuses.