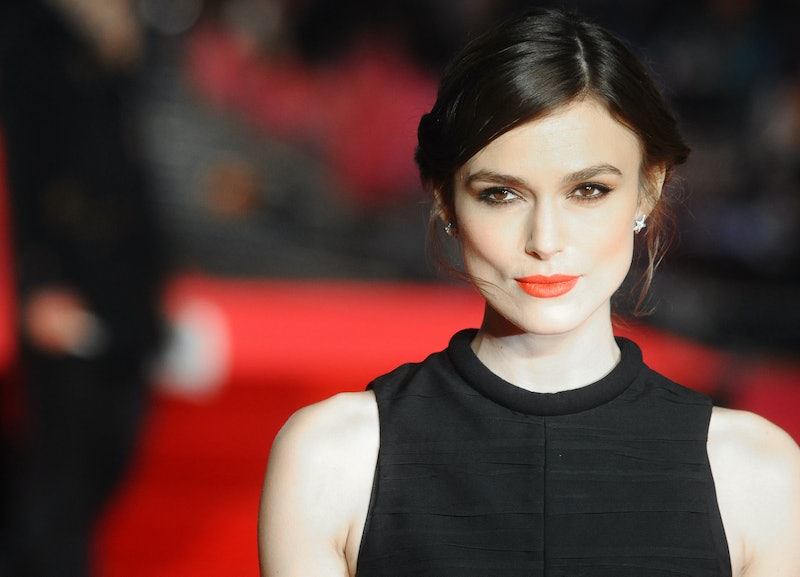 By and large, we Americans are a very religious people. In fact, according to a 2012 Pew study, just 2.4 percent of Americans self-identify as "atheist." And while it's fashionable and acceptable in the world of celebrity — Daniel Radcliffe, Julianne Moore, and Keira Knightley are all atheists — it's still damn tough to get elected as one. The U.S. Congress currently has just one member, Arizona Rep. Kyrsten Sinema, who's openly atheist. (And even she's pushed back against that moniker since getting elected, for pretty obvious political reasons.)

Perhaps more people don't identify as atheist because there are so many misconceptions about what it means to be one. All too often, a sentence as simple as "I don't believe in God," is heard as a searing attack. If you're an atheist and find yourself in such a testy exchange, here's a little cheat sheet of how to argue for atheism.

Common ARGUMENT #1: Atheism is arrogant in its certainty that there is no God.

Your Response: Refusing to believe something which has no meaningful supportive evidence, and stating confidently that you don't, is not arrogant. Let's say I believe that rocks don't talk to each other, for example. That can't be 100 percent proven. If that's arrogant, I'd have to remain agnostic on the talking rock proposition.

There are undoubtedly individual atheists who are arrogant — a figure like the late Christopher Hitchens, who in writing and public debate was one of the most electrifying atheist speakers in the world, is nonetheless pretty easily indicted of arrogance. But the charge that atheism itself is an arrogant view of life or the universe? Not so much. It's really a fundamentally unassuming outlook. It begs no immediate answers, and it doesn't threaten punishment for waiting and seeing.

2. ARGUMENT: Atheists have no moral framework.

Your Response: Quite the contrary! There's a case to be made that the search for moral truth is more important, and more noble, if it's pursued for its own sake. Claiming that morality is only true or binding if God hands it down to us just isn't true. Considering many of the world's major holy books contain divine orders that seem flatly immoral — calls for violence, slavery, sexual discrimination and the like — religion's claim to absolute morality seems shakier still.

3. ARGUMENT: Promoting atheism is itself a form of evangelism.

Your Response: Atheism is not a religion.

Religions are, by definition, statements of belief. Atheism is not a statement of belief — it's a statement of non-belief. While faith aspires to convince you of an evidence-free assertion, atheism does nothing more than point to it and say "no reason to believe that." It doesn't state as fact any claims about the universe it can't demonstrate in a researched scientific structure. And perhaps most distinctly from faith, it's comfortable sitting in a space of unknowing.

Your Response: Look, Atheists are not blind to the finer joys of life, however much believers sometimes doubt it. Just because we don't think the significance is supernatural doesn't mean we're lying about feeling the presence of God, or are in some state of bitter denial. We really aren't blithely ignoring fears and concerns we secretly have about eternal judgement. By and large, we don't believe a word of it.

If somebody tells you they don't believe in God, try really believing them, and considering how it would affect your perspective if you came to feel as they did.

5. ARGUMENT: Talking about Atheism in mixed company is rude and condescending.

Your Response: If I told you I didn't like your favorite movie, or the politician you voted for, it might irritate you, but it would probably still be a conversation starter — not a conversation ender.

This doesn't work as neatly with religion, which makes sense. It's really, really vulnerable to have faith in God in an age of advanced scientific discovery. As such, it's damn near impossible to make the case for Atheism without it being quite hurtful to the believer. It doesn't just sound like "everything you believe most deeply is untrue," it is precisely a belief in that.

Here's a deal we can strike: I promise not to get too riled up if you're into a God who'd send me to hell ... if you promise not to freak out that I think Jesus stayed dead. Can we shake on that?