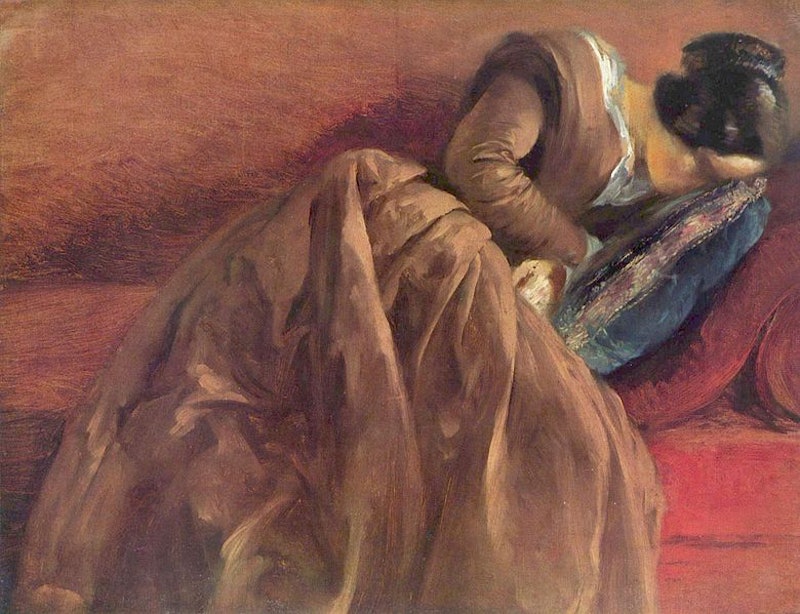 Sleep is an essential part of human health; after a mere 24 hours of sleep deprivation the body starts to go haywire, and 11 days of it seems to be the record a human has managed without dying. It's one of the human constants, but it's also, if you think about it, a very peculiar practice. Why do we need to spend so much of our lives essentially unconscious with bizarre images playing around in our minds? And what have people throughout history thought about sleep and its role in life, psychology, and conversations with the gods? (Spoiler: quite a lot of them emphasized that last one.)

We've only discovered the concept of the body clock (natural shifts wakefulness and sleepiness) in the past few centuries, with its attendant procedures that cause drowsiness at night: melatonin release, increasing levels of adenosine, and so on. And we're beginning to understand what happens to the body during sleep, including memory solidification, tissue regrowth, and growth hormone release. But sleep's had a slightly peculiar ride throughout history, from being targeted as a potential occasion for demon possession to being utilized for (thankfully useless) brainwashing techniques. Sleep science is still expanding, but it's been an interesting road.

Here are nine of the most fascinating episodes in the history of sleep, from hydraulic spirits in the skull to alarm clock shock-cages. If you find yourself dreaming of brain-floods and ancient Greek oracles tonight, it is officially my fault.

1. We Used To Separate Sleep Into 2 Parts Of The Night

The idea of the solid eight hours of sleep (or nine, or whatever science is currently recommending) is actually a modern creation, necessitated by the Industrial Revolution. Before that point, medieval society actually had two sleeps a night, the first and second sleeps, with a gap of wakefulness in between to eat, pray, talk, make love, or entertain yourself. Evidence suggests that the idea of segmented sleep is actually ancient: Professor Roger Ekirch, from the Department of History at Virginia Tech, who brought the idea of segmented sleep back into the mainstream in 2013, found references to it as far back as Homer's Odyssey.

It seems to have been particularly popular during winter, when darkness took up a large portion of the day. But the gradual introduction of artificial light, plus the new working-day demands of industrial factory production, meant that segmented sleep gradually became less workable — though a 1992 study found that people actually return to "biphasic sleep," as it's called, if they're put in a cycle of 14 hours of darkness per day. This may be one more reason that so many of us are walking around sleep-lagged all the time.

2. The Ancient Greeks Thought Sleep Was Blood Retreating Into The Body

We haven't known a lot about what actually happens when we sleep for a large portion of human history. But that didn't stop the ancient Greeks from coming up with some fairly spectacular (and, let's face it, basically rational) theories for what really goes down when the lights go off in the brain.

The most famous is the one formulated by Alcmaeon of Croton, a philosopher and medical writer who decided that sleep was due to blood flow shifts. According to Alcmaeon, whose theory was very influential, sleep occurred when blood retreated from the surface of the body into "interior" areas like the brain, and we woke up when the blood diffused out again. Hippocrates, another famous name in the medical history of Greece, thought that blood physically retreated from your limbs into your abdomen to warm itself and produce sleep.

3. People Used To Sleep To Receive Messages From Gods

The phenomenon of incubation, or holy sleep in a specific area like a temple in order to receive messages from oracles or gods, has been a phenomenon in multiple ancient societies. Some evidence suggests the ancient Egyptians practiced it, and the classical Greeks certainly did, consulting oracles (or religious fortune-tellers) by sleeping overnight in their particular isolated temples or caves. The most famous, of course, was the oracle of Delphi. The answers to their questions would then be revealed in their dreams (if they were lucky).

Some oracles took the idea a little further. There's evidence that the cult of Asklepios, a medical god, involved "induced" sleep in the temple, possibly with opium-laced drinks. The idea of sacred sleep is found in other cultures, too: kouche, or ritual sleep, is one of the initiatory rites of Haitian voodoo, for instance.

The concept of dream divination, or predicting the future using the random visions that occur in our heads during the night, has been around for a very long time, but medieval Christians had a particularly fraught relationship with their nightly ventures into dreamland. They thought they could tell the future, but they also worried that it was a time when the mind was "vulnerable" — specifically to the devil. One medieval author said that dreams could "arise from God through inspiration... [or] sometimes from the devil through treacherous deception and contrivance". You had to be careful; dreams were tricky things.

Rene Descartes, obviously, is best known these days for his contribution of "cogito ergo sum" (I think therefore I am) to Western philosophy, but the French philosopher also had a lot of ideas about the function of the body and brain. He proposed that sleep was caused by brain hydraulics: basically, he thought that if the pineal gland, which he regarded as the seat of the soul, stopped producing "animal spirits" to fill up the cerebral ventricles, the ventricles collapsed like empty bags and the brain went to sleep. To wake up, the pineal gland had to start producing "spirits" again. Needless to say, this idea didn't stick.

The 19th century was an interesting time for theories about sleep. After centuries of thinking about it in terms of blood loss or other alterations, a theory called "congestion theory" became the prominent one. Essentially, notable physicians thought that sleep was brought on by an overwhelming flow of blood to the brain, effectively flooding it and sending it off to dreamland. According to a Boston doctor writing in 1909, when the theory had fallen out of favor, "this congestion of blood was supposed to bring about pressure on the brain with the result of depression of all the cerebral functions." Why nobody wondered whether this would bring on cracking headaches instead of sleep remains a mystery.

7. The Psycho-Phone Tried To Teach People In Their Sleep

If you've ever been exposed to the sci-fi idea of learning in your sleep, you probably have Alois Saliger's Psycho-Phone to thank for it. The Psycho-Phone, invented in 1927, was supposed to be an aid for hypnopædia or sleep-learning, using suggestion (like repeated phrases) to "embed" ideas in the sleeping person's mind. It featured in a 1933 article in the New Yorker, where Saliger boasted he'd sold more than 2500 of the devices and played the records he supplied with it, including one called "Mating" which said things like "I desire an ideal mate. I radiate love. I have a fascinating and attractive personality. My conversation is interesting. My company is delightful." As things to hear in your sleep, they're hardly unfriendly, but sleep-learning has, alas, been debunked.

8. Sleep-Inspired Inventions Have Always Have Been Weird

Some of the strangest devices ever invented have been related to sleeping and dreaming, and they're still coming. Nowadays, mattresses and devices that monitor sleep quality and duration are pretty commonplace, but sleep-inspired inventions have a hilarious history, from the first "device for prolonging sleep" in 1909 (read: a blindfold) to a truly terrifying waking-up device from 1881 by the enterprising Samuel Applegate. Applegate's design was hung over the bed "in such a position that it will hang directly over the head of the sleeper," made of wood and cork to "cause pain". When the device was triggered, "the frame is at the proper time permitted to fall into the sleeper's face." You are not allowed to complain about your alarm clock ever again.

If you thought that was the end of sleep-patent inventiveness, you're missing out. The airline producers Boeing filed a patent in 2015 for an "upright sleep support system," which is an airline seat with a "face relief aperture": a big face-cushion that extends in front of you and can support your head. Face-down sleeping: it's the future of long-distance flight.

Many humans find it deeply difficult to get to sleep without some kind of covering, however light, on their bodies. Why is this? Is it temperature regulation, our primal brains requiring some kind of protection, or another impulse? We're discovering interesting new things about this tendency: weighted blankets, it turns out, may soothe hyperactive or autistic children because of additional bodily pressure, and it's now being posited that the weight also helps anxiety and insomnia in adults. Clearly something about weight at night is helpful to us.

Temperature regulation is also very necessary to sleep; we need to be warm but not too warm, hence the impulse for a blanket. This careful regulation is also why the National Sleep Foundation has studied the tendency for people to poke their feet out of blankets, and they believe it's about cooling the body for sleep purposes. The need for a blanket, it seems, is a complex impulse, not just our child brains crying out for protection from the monster under the bed.

More like this
25 Inspiring Quotes From Black Women To Celebrate Black History Month
By Kyli Rodriguez-Cayro and JR Thorpe
19 Instagram Captions For Celebrating Black History Month
By Ayana Lage
15 Black-Owned Liquor & Wine Brands To Add To Your Bar Cart
By Alexis Morillo
4 Zodiac Signs That Will Take Forever To Admit They Like You
By Kristine Fellizar
Get Even More From Bustle — Sign Up For The Newsletter
From hair trends to relationship advice, our daily newsletter has everything you need to sound like a person who’s on TikTok, even if you aren’t.