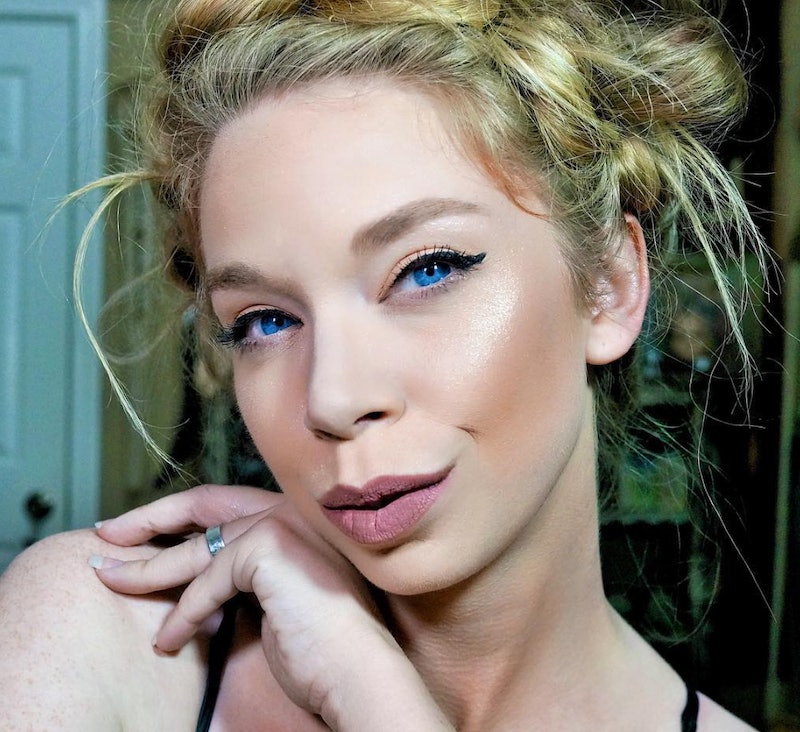 Finally! After months of teasing and over a year's worth of work, according to the caption of her post, vlogger grav3yardgirl shared swatches of her Tarte Cosmetics collaboration and it's divine. It looks like a multi-purpose palette and the colors are lots of gorgeous neutrals, shimmers, and mattes. The swatches debuted in the shape of hearts and she also revealed their adorbs names. They've been christened with cute monikers like "Big Baby" and "Sassy Bun." Who else is already in love, sight unseen?

Well, let's fix that last part by having a look at the grav3yardgirl x Tarte collabo. While she didn't reveal many details about "what" the swatches are, our friends over at Trendmood did share some further information about this partnership and its products.

Other deets you need to know before observing? It's apparently a face palette with blush, shadows, a highlighter, and a bronzer.

This is not the totality of the grav3yardgirl x Tarte collabo, either. Apparently, two liquid lipsticks are also involved, as well. Graveyardgirl had teased products that looked like they were for tubes of liquid lippies a few weeks back and she did so with the black and white filter to further obscure them. More on that in a sec.

OMG! The shades are quite universal and a bit unexpected for someone as edgy as grav3yardgirl, right? Still, they can be combined, blended, and buffed for custom looks. It's also Tarte, which means the products are high quality.

Here's the black and white liquid lipstick tease I alluded to previously! So sly, stealth, and coy.

That's the Trendmood caption, indicating further details. It seems the palette will be available at Sephora and is coming soon. I have only one reaction to that information and it's "YAAS!"

Oh, and ICYMI, here is another prior tease of this collabo. It all looks awesome to me!