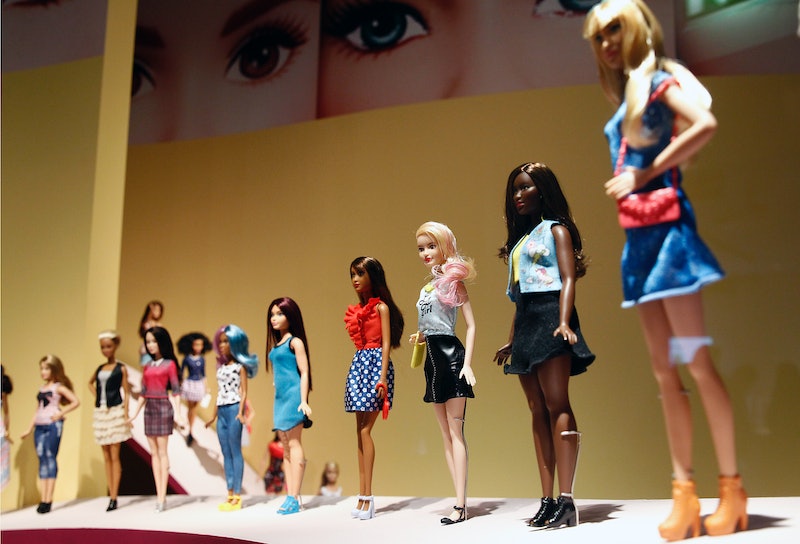 Barbie has put out a press release! Or whatever we want to call her new "essay," which appears on official Mattel website BarbieCollector.com, defending her recent appearance in the Sports Illustrated Swimsuit edition. In this essay, Barbie "writes" about how she is more than a pretty face, how little girls should be allowed to aspire to any career they want, how "pink is not the problem," and how models are not objects or idiots just because of how they make a living. It's a little disturbing to find yourself agreeing with things "written" by Barbie, but the whole essay is pretty feminist. But that doesn't make Barbie any less of a problem.

People have talked to death about Barbie's body, which is not only unrealistic but downright impossible, to the point of being deformed. If Barbie were real, her body mass index would be well below healthy, and she would have to walk on all fours because her proportions are so out of whack. She promotes a body image ideal which is downright harmful to any child who internalizes it. Comparing her to a model of an average 19-year-old it's clear how messed up the Barbie idea of beauty is.

Barbie promotes a particular type of femininity. And while there isn't anything wrong with women who embody this version of womanhood, it's a problem to promote it at the exclusion of all others. Barbie is not only thin, but she is also wearing make-up. She always has that perfect, shiny hair – at least when she comes out of the box. And she absolutely always has a smile. "Be whatever you want," she says, "just also be beautiful, always care about your appearance, and always be cheerful."

And, I'm sorry, Barbie can say "pink is not the problem," but pink is a big fucking problem. Not because of the color itself but because of the fact that Mattel hasn't seemed to realize that the rest of the color palette isn't a problem, either. Barbie aisles in the toy store are a sea of pink. And all of this primes girls to believe that they belong in a world of pink, and all the stereotypes that comes with. Giving girls an overwhelming amount of pink is limiting as all get out.

I agree that a woman should not be "judged by how she dresses, even if it’s in heels," that models are definitely not "poseable plaything with nothing to say," and especially that girls "should celebrate who they are and never have to apologize for it." But girls will never be Barbie, in any sense. To say that Barbie isn't human goes well beyond being made of plastic.

I don't know where those toys are, but I do know that they aren't Barbie. And all the essays in the world won't change that.

More like this
11 Trends From The ‘90s That Made You Feel So Cool
By Julie Sprankles
Meghan Markle’s Favourite Skincare Brand Has Finally Landed In The UK
By Tomi Otekunrin
How To Master Baby Braids, According To TikTok
By Tomi Otekunrin
Reviewers Are Obsessed With These 45 Things That Look Good On Everyone & Are So Damn Cheap
By Carina Finn
Get Even More From Bustle — Sign Up For The Newsletter