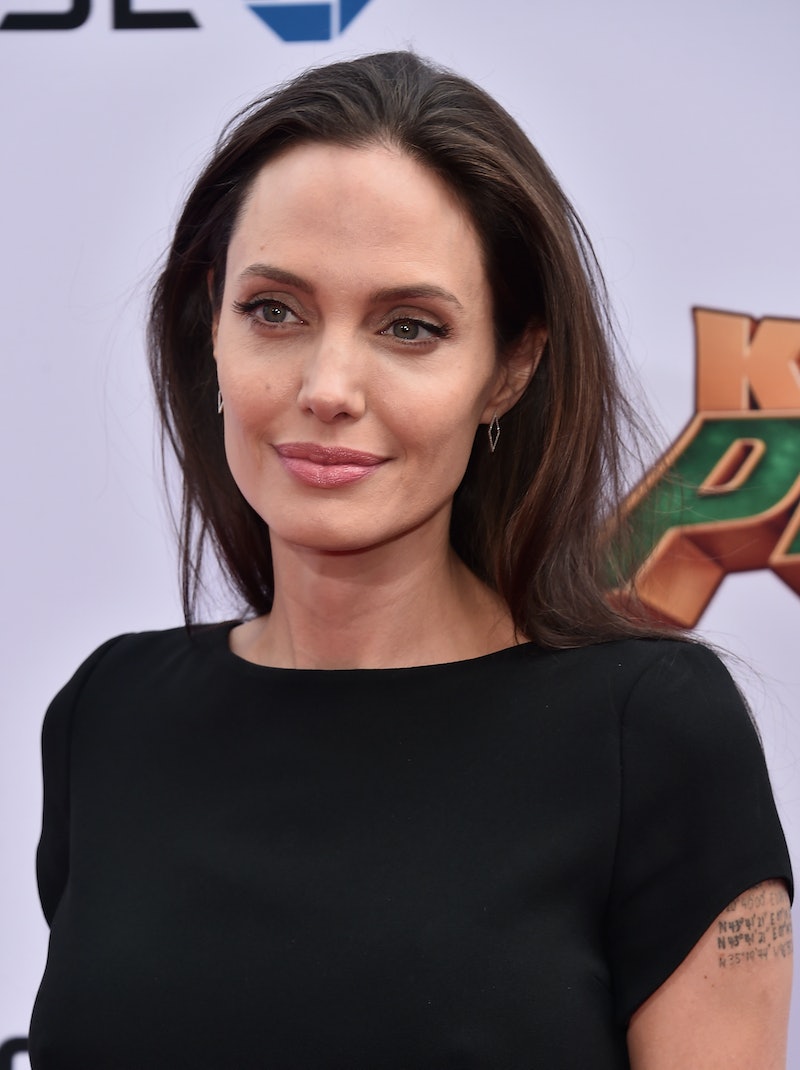 Angelina Jolie is one Hollywood celeb who has an impressive resume when it comes to both the entertainment world and giving back to those in need, so Jolie's new gig teaching women's studies in London makes complete sense. To be clear, the 40-year-old actor is not a full-time professor, but she has been given the title of visiting professor at the London School of Economics for the 2016-2017 school year. Currently, she, Brad Pitt, and their children are living in London, while Pitt films World War Z 2. As a visiting professor, Jolie will help out with the new masters course on women.

Can you imagine having the Oscar-winning actor filling your head with knowledge about women's rights and gender equality? Yeah, it'd basically be a dream come true. Her duties include giving guest lectures, joining in on workshops and public events, and helping with research on certain projects. According to People, the course was developed by Jolie and Britain's former foreign secretary, William Hauge, and "is the first of its kind internationally."

Jolie released a statement (via People) about her new role as professor and said,

I am very encouraged by the creation of this master's programme. I hope other academic institutions will follow this example, as it is vital that we broaden the discussion on how to advance women's rights and end impunity for crimes that disproportionately affect women, such as sexual violence in conflict. I am looking forward to teaching and to learning from the students as well as to sharing my own experiences of working alongside governments and the United Nations.

This isn't the first time the By the Sea director has show interest in women's issues. In June 2015, Jolie spoke at the African Union Summit and gave a powerful speech about ending violence against women. "Women and girls are bearing the brunt of extremists that revel in treating them barbarically," she said. This is inextricably linked to our overall failure to prevent and end conflicts worldwide, which is causing human suffering on an unprecedented level." She ended her empowering talk as follows:

There is no greater pillar of stability than a strong, free and educated woman, and there is no more inspiring role model than a man who respects and cherishes women and champions their leadership.

If that isn't proof enough, during the 2015 Women in the World Summit, Jolie reflected on the lack of women's rights in war-torn regions like Syria and Iraq. She wholeheartedly believes everyone should ban together to fix the problem. As she pointed out,

Women are still treated as secondary issues. It is still far too easy and accepted for leaders to ignore uncomfortable truths, from FGM (female genital mutilation) to child marriage. It is still the norm for women to be excluded from the peace process. Women, we know, are the first to be affected by war, and the last to be taken into account when it ends.

Not only does she give empowering talks about women's rights, but she also makes sure she is giving back to worthy causes. In June 2013, she donated $200,000 to the Malala Fund, an organization set up by Malala Yousafzai to help girls receive a safe and quality education. Previously, in 2012, Jolie donated $50,000 to Tina Brown's Women in the World Foundation through her Education Partnership for Children of Conflict charity.

I think it's safe to say that Jolie definitely has a passion for not only furthering the education of girls and women, but also ensuring that the world treats them with the respect they truly deserve.

Clearly, Jolie is more than qualified for the task of visiting professor, and I can only imagine how much she'll impact her students. Actually, she is already making a difference, because Georgetown University is looking to acquire her program.

I was pleased to meet with Angelina Jolie during my recent trip to London on ways we at Georgetown University can continue the collaboration between our sister programs on both sides of the Atlantic. We look forward to welcoming Angelina and former foreign secretary Hague to Georgetown in the future.

It's official: Professor Jolie is already improving education in a huge way.

More like this
Twitter Is Identifying With Sally Field & Jane Fonda’s Friendship In New Viral Video
By Jake Viswanath
Another Side Of Rupert Grint
By Maria Sherman
Pamela Anderson’s Dating & Marriage History Could Be Its Own TV Series
By Jake Viswanath
Jennifer Coolidge Hunted For Jewels & Lashes In J.Lo’s Hotel Room
By Jake Viswanath
Get Even More From Bustle — Sign Up For The Newsletter
From hair trends to relationship advice, our daily newsletter has everything you need to sound like a person who’s on TikTok, even if you aren’t.