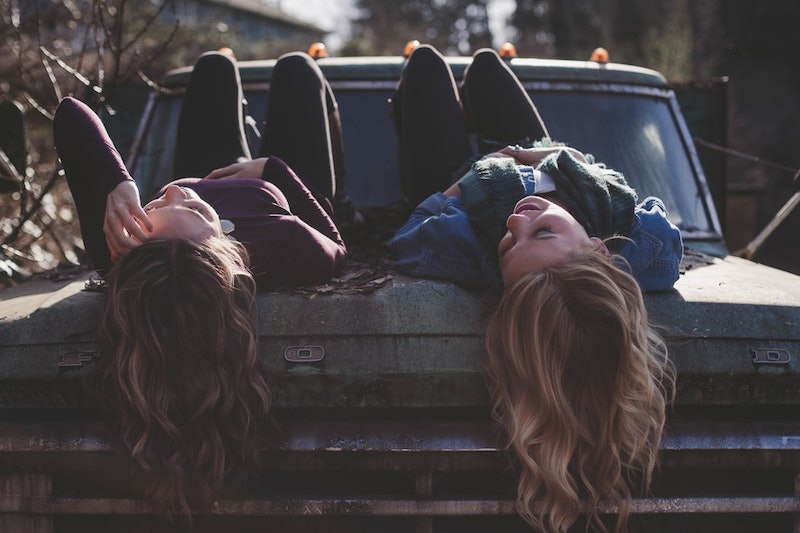 I'm a firm believer that your partner doesn't need to know every thought or feeling you have. You're still an individual. You don't have to communicate everything. But there are some things couples don't communicate about enough. Those things are usually the ones that are hard or messy to talk about. The ones that bring up the real feels, that shine light on the dark corners of your love, or that would probably lead to an argument. Conflict. Gross. I'd rather nap or pet all the dogs (or put sharp things under my nails). And I'm sure I'm not alone.

But, I can say from professional experience (as both a Domestic Violence Victim Advocate and Planned Parenthood Certified Responsible Sexuality Educator) that these topics, when avoided too long, become ticking time bombs. They grow bigger and darker, until something that could have been one uncomfortable conversation turns into a relationship-changing issue. Don't let your uncomfortable feels become relationship changing issues.

Unsure of what you might not be communicating about enough? Check out this list and then set aside a nice chink of time to hash a few of them out with your partner. It might suck at first, but then you'll feel better, and closer. And grown.

1. How They Feel About Other People

Odds are, if you're in a relationship long enough, you'll have some mixed feelings for another person. If they were fleeting and talking about them will just devastate your partner, then I don't think you have to tell them. Agree to disagree. But what you can talk about, what you should talk about, is what you were getting from or wanting in that other person that you're not getting from your relationship. Sometimes mixed feelings have nothing to do with the person you feel them for and everything to do with how that person makes you feel wanted or special. Talk about how you can get that from your relationship.

2. Things That Annoy You

Let's face it. There are times in a relationship where, if you discussed everything your partner did that annoyed you, all you would ever do was list everything they ever did. You can learn to let a lot of the little stuff go. But some things you have to talk about. If it's something your partner does that is art of their personality, or important to them (like being a slow walker, or spending all day every Saturday coaching youth basketball) then you can learn to deal. But if it's something you feel is mean or selfish, then you need to speak up. Like, if your partner doesn't ask you what you want to watch and assumes you're OK watching a show you actually hate (but they don't know you hate it because you never said anything and they never asked). It's avoiding talking about this kind of thoughtless stuff that leads to resentment.

A lot of us expect our partners to be mind readers, and then we get upset when they're not. We don't discuss our needs, maybe because we don't think our partners will meet them, or maybe because we don't even understand them ourselves. But it's vitally important to discuss your needs. It's how they get met. You need to actually say things like "I need a hug, I'm feeling down" or "I need more compliments, I'm feeling unattractive" or "I need you to watch the kids couple nights each week so I can have some alone time." It's kind of miraculously powerful when you lean to communicate your needs.

Nothing fills the well of resentment like unsatisfying sex. I worked with some couples who had gone years and years without ever talking about sex. One partner wasn't getting satisfied and the other partner didn't know, and it was a whole big thing. You have to let your partner know what you like, what you want to try, what you want to do, and what's not working for you. You need to get yours! Plus, if you have a caring partner, they don't want you to be unsatisfied! They want direction. They want instruction. They live for feedback. Communicate more about sex!

6. How Your Day Went

How many times have you had this conversation: How was your day? Fine, how was yours? Fine. And then you head to your phones or your TVs and that's that. Even if nothing really interesting happened, it's still better to tell each other a little about your day. It makes you feel connected, like you're a part of each other's lives. You don't have to bore each other with the details about the meeting that should have been an email, but you can say you had an annoying meeting. Skipping these kinds of little check-ins is how distance starts to form.

I know right, but you really do need to communicate about communicating! You need to let each other know about your individual communication styles, ways you could improve communication, an what you need from your partner in terms of communication. You can also make sure each of you is being heard. Since communication is such an important part of a healthy relationship, it's no surprise that it's something couples need to talk about more often.

Some people have clear communication boundaries, and their partner's have to kind of guess at them or make mistakes until they figure them out. Better to talk about them instead. For example, I won't be yelled at. I'm a grown adult, not a child. Calm yourself and come back when you can speak. Other communication boundaries include what names you can't call each other, what things you can't say, what topics you can't bring up, and the best approaches to talking about difficult subjects. These boundaries make future communications more productive and comfortable for all involved.

9. When You Need Space

A lot of people don't know that it's OK to ask for space in a relationship, even if it's a couple who has been together for decades. When one person needs space and doesn't communicate it, they often take out what they're feeling on their partner. They're short, annoyed, or cold. This makes things worse. It's OK to say to your partner "I just need to be alone for a few hours/days/etc." Think of it as communicating about when you won't communicate.

10. What Will Happen If Things End

It's really easy to live with someone for a few years, and to accumulate some shared pets, furniture and bills. Its harder to decide what happens to that stuff when things end. Losing pet custody can be as heartbreaking as the breakup itself. It seems like a horrible thing to talk about, but you need to do it, because you might not be able to do it later. Better when you're clear headed and not in the irrational and occasionally immature throes of a bitter split.

If people communicated more about their insecurities, I'm convinced there would be a million percent drop in relationship problems. So many of the things we do, from how we communicate, to how we love, to if we trust, to why we act certain ways are influenced by our insecurities. If we said things like "I was just reacting because I was feeling insecure about you leaving me" instead of just lashing out and being jerks, we'd get more understanding and less and fighting. It's hard to do, but once you open up, you'll get closer with each other an with yourself. It's a double win.

Stock up on bottled water and lozenges. There's going to be a lot of talking in your future. But better a sore throat than a broken heart.