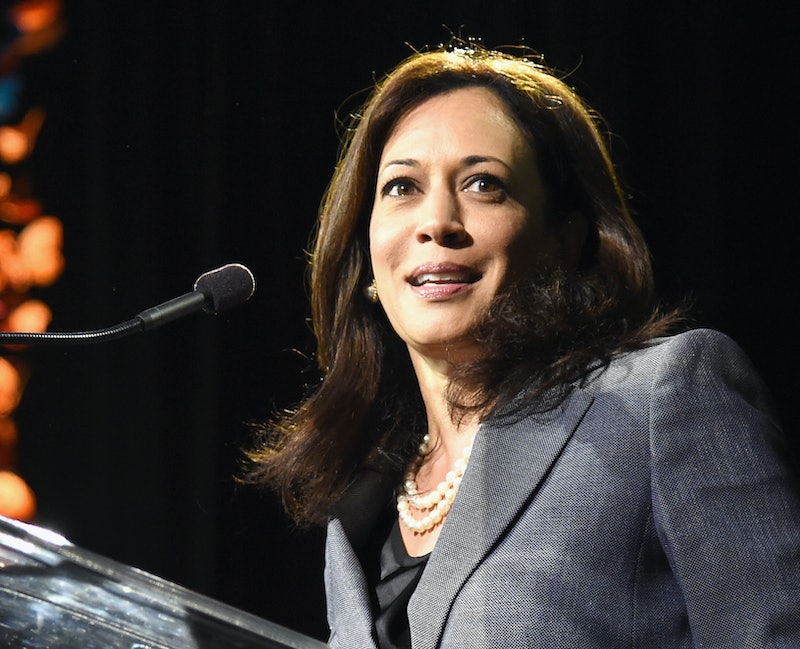 Women currently make up just one-fifth of the 100 serving U.S. senators, and yet California has had two female senators since 1993. That's when it became the first state to send two women to Washington D.C. concurrently. Now it looks likely the Golden State will make history once again, when two Democrat women vie for California's open senate seat in the general election.

They'll be fighting for the opening left by California Sen. Barbara Boxer, who announced she would retire back in January 2015. When her term ends in January, she and fellow Democrat Dianne Feinstein will have served 24 years together after being elected on the same ticket in 1992. Fast forward to 2016 and two other prominent female Democrats seem poised to appear on the ballot together. The only difference this time is that only one will go to Washington.

Thanks to California's new top-two open primary law, party affiliation no longer decides who makes it to the state's general elections. Instead of the top Democrat and top Republican automatically facing off, it depends on who does the best in primaries. The top two vote-getters (of any party) move on to the general election (the presidential nomination process being a big exception).

If current polling holds true — the race is two weeks way — the top two candidates for the U.S. Senate seat will be two truly impressive Democrats. In first place, with 31 percent of the vote is Kamala Harris. She has served as California's attorney general since 2011 when she succeeded now Gov. Jerry Brown. The daughter of two immigrants — an Indian mother and Jamaican father — she is notably the state's first black, first Asian-American, and first female attorney general.

She was reelected in 2014 and has made a name for herself. Her 2012 negotiations with mortgage companies resulted in $18 billion that went directly to relieve homeowners under water. She is now investigating Exxon Mobil, along with other state attorneys general, for fraud surrounding climate change research. And even in tech friendly California, she has targeted mobile apps that fail to include privacy policies. At one point her name was suggested both for U.S. Attorney General and later for the Scalia Supreme Court vacancy.

The only problem with the race is that the other Democratic candidate is just as impressive — currently polling second (at 22 percent) is Congresswoman Loretta Sanchez. Though she's not as progressive ideologically, she does have plenty of Capitol Hill experience. The daughter of two Mexican immigrants, she has served as a representative from Orange County (her district changed in 2003) since 1997.

She has plenty of armed services and homeland security experience, something she has been touting in advertisements in the primary race. She also has stressed her opposition to both the Iraq War and the Wall Street bailout, which shows the ideological niche she's trying to carve out for herself — couple that with her strong support of DAPA, Obama's program to give parents of immigrant children legal status.

The unique circumstance of the race makes for more than just a milestone. There's also a lot of uncertainty as it plays out — it's the first primary since the top-two law came into effect in 2011. In a normal primary, Harris would be crowned the winner of the Democratic primary, face a Republican and then more than likely win (Democrats make up 44 percent of the state's registered voters, Republicans just under 30 percent).

But this is not a normal primary giving way to a Republican vs. Democrat general. Sanchez could appeal more to Republicans and more conservative Democrats. If she were to win, it would change the makeup of the Democrats in the Senate. Barbara Boxer has been one of the most liberal senators, which makes sense given she's from one of the most liberal states. The voter-approved top-two law, designed to remove party control in Democrat-heavy California, could have very real consequences on the national level, which remains hyper partisan.

That said, either win would be a milestone. Harris would be the only black woman serving in the Senate and Sanchez would be one of the first Latinas (Catherine Cortez Masto, a former state attorney general, is also running to fill Harry Reid's seat in Nevada). And no matter what happens, you should be able to count on California for an all-female Senate delegation — at least until Dianne Feinstein retires. She will be up for reelection in 2018.