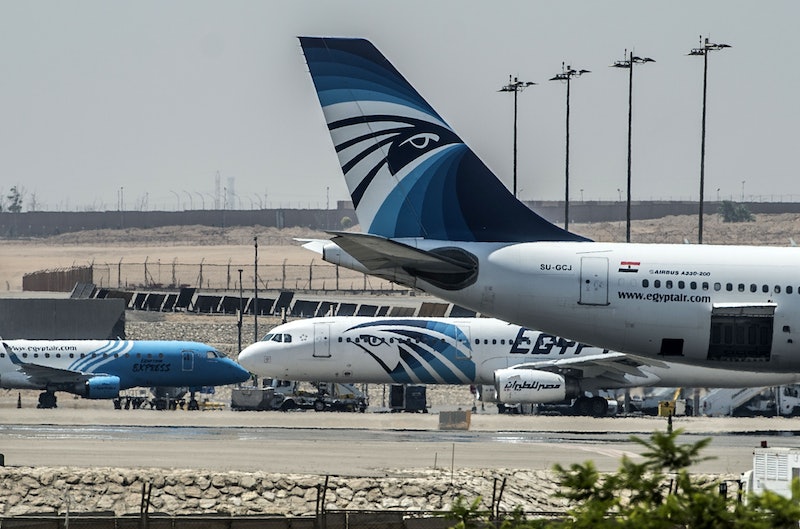 Human remains recovered among the EgyptAir flight 804 debris point to an explosion on the plane, a top forensics official in Cairo told the Associated Press Tuesday. The official is part of the investigative team working on what caused the crash of the Airbus A320, which plunged into the Mediterranean Sea early Thursday with 66 people on board. Speaking on condition of anonymity, he told the news agency, "The logical explanation is that an explosion brought it down."

The same official personally examined the 80 pieces that have been brought so far to a Cairo morgue. He told AP that all of them are small. "There isn't even a whole body part, like an arm or a head," he said. One was the left part of a head. Reuters also spoke with a forensics official who said the largest piece was no larger than the size of a palm. He added that 23 bags of body parts have been collected Sunday.

What remains unclear is what could have caused the explosion — be it an explosive device or some sort of mechanical failure. No explosive traces have been detected so far. Investigators will test human remains, clothes, and pieces of any recovered luggage, according to people involved with past investigations that involved "deliberate blasts," Reuters reported. Those tests will remain vitally important, especially while the black boxes remain unaccounted for.

Some are already concerned that the recovered evidence that needs to be tested could be compromised. Photographs have been released of Egyptian military personnel placing recovered items on uncovered surfaces and not even wearing protective clothing. Both the military workers and the French vessel used for the recovery mission could have been exposed to ammunition that leaves a similar chemical residue. Even chemicals used on the ship could cause a false positive.

On top of that, conflicting reports over the plane's final moments have also emerged. On Monday, the head of Egypt's state-run air traffic control company said that the jet did not appear to swerve as it entered Egyptian air space. Previously, the Greek defense minister had said the plane turned 90 degrees to the left, then turned 360 degrees to the right, dropped 20,000 feet, and finally disappeared from radar. But, according to the Egyptians, it just disappeared all of a sudden.

Given the new questions about what the radar showed, the importance of recovering the black boxes seems more paramount than ever to answer what exactly happened. Automatic systems reported that smoke detectors went off in a toilet and in the plane's electronics compartment moments before the crash. The French Bureau of Investigations and Analysis, one of the groups working with Egypt on the investigation, said it was too early to say what the data meant — it cannot be confirmed without the flight data recorders.

Unfortunately, the plane did not have updated batteries that would keep the black boxes pinging longer than 30 days. New rules that go into effect in 2018 — a response to past air disasters in water — require batteries that last 90 days. Egypt has dispatched a submarine to search for the black boxes, and a French ship joined in the international effort to locate debris. For now, time is still on their side, but the more searching that can be done while the boxes continue to ping, the better.