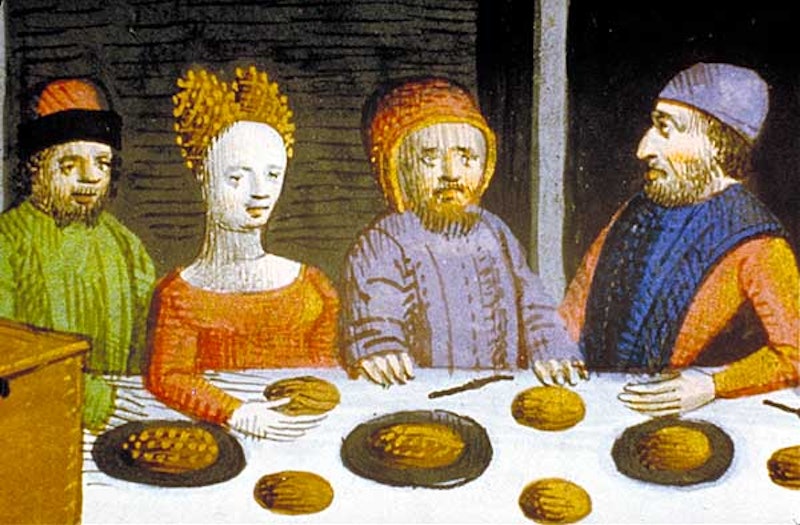 How old is the meal you're eating right now? No, I'm not asking "how long has it been in the fridge;" I want to know how ancient the recipe for the food that you're consuming right now is. For some common foods, the answer is "extremely" — some of our favorite recipes have been used by human beings for thousands of years. And it isn't always the most basic foodstuffs that have the longest pedigree. Alongside staples like beer and roast boar, some of the most ancient recipes in human history involve elaborate instructions for foods like almond milk, hangover cures and fancy cakes. Which makes sense: we've always been a species that enjoys stuffing its face and passing down the knowledge about how to do it properly.

The archaeology of food is a genuine area of scholarly study, and for understandable reason: food is the cornerstone of any human civilization, with ties to class divides, technology, crops, religion, ceremonies and morals. So, no, that meat pie is not just a meat pie. The audience for recipes has changed radically throughout history, too; one of the oldest recipes on this list was made to be read only by cooks for medieval nobles, while another was concealed in an abbey library for hundreds of years; food knowledge hasn't always been easily available to the masses. Now, however, you can enjoy the fruits of scholarly labour by making a 10th-century hangover stew or an 8,000-year-old pudding. They may taste faintly disgusting to your modern palate (and, considering that many of these recipes were created before modern hygiene standards, I'd not necessarily advise you to try to whip them up on your own) but hey, it's real history brewing in your crockpot.

The oldest beer recipe in the world was only discovered this week, but it wasn't entirely a "recipe" in the traditional sense: it was a breakdown of ingredients found in a beer-making facility uncovered in a dig site in China. Archaeologists exploring the site found brewing equipment dating back to around 3400 BC, in very early Chinese history, and sent off leftover traces from the jugs they'd found. The result? A very modern-sounding malted combination of millet, barley, Chinese pearl barley and tubers.

Ancient evidence of brewing has popped up all over the world, from Iran to Egypt — but for now, this particular facility has been crowned the oldest in human history. While the makers didn't write down their secret formula per se, you can bet a company will probably be marketing "the world's oldest beer" as soon as possible.

Nettles, while edible, aren't usually seen as tasty fodder, though foragers across Britain in particular say they're lovely as a soup or in a risotto (as long as they're prepared in some way that takes out their famous sting). But the oldest recipe in the United Kingdom, dating back 8000 years, involves them as the prime ingredient. I know, I'm not really envying ancient Britons much either.

The nettle recipe was uncovered as part of a 2007 investigation by the University of Wales Institute, which labeled it the oldest in the history of Britain: while it was only recorded in 6000 BC, it may actually be as much as two thousand years older than that. That's one hell of a pedigree for a dish that's pretty no-fuss: the researchers say it's essentially nettles boiled with barley and water. "Pudding," in this context, is used in its older sense as a savory term.

I'm Australian, and our nation is very devoted to the art of the meat pie. So it is thoroughly unsurprising to me to know that this delicacy has been enjoyed for over three thousand years. The source for the earliest meat pie recipe comes from ancient Mesopotamia; specifically, from tablets dating to 1700 BC, which were only translated from ancient Assyrian by French academic and chef Jean Bottero in 1985.

The three tablets, which are currently held by Yale University, contain detailed recipes for stews (there's a gazelle one, if you're interested), plus the ancient pie recipe. We're not entirely sure what kinds of birds the recipe requires, but with its emphasis on the gizzards as well as the rest of the bird, it's a testament to nose-to-tail eating:

"Carefully lay out the fowls on a platter; spread over them the chopped pieces of gizzard and pluck, as well as the small sêpêtu breads which have been baked in the oven; sprinkle the whole with sauce, cover with the prepared crust and send to the table."

This is one of the most famous ancient cookbooks in history: the De Re Coquinaria, a Roman recipe collection also called Apicius after a famous Roman gourmet. (He himself only contributed about three-fifths of the recipes, and the copies we have date from long after his death.) It's divided into ten sections on various culinary topics, from "The Careful Housekeeper" to "The Quadruped," and contains hundreds of recipes, many of which are the earliest examples of their kind.

Along with more exotic fare for Roman audiences like roast dormouse and the liver of sows, the De Re Coquinaria contains less challenging stuff like straightforward roast boar. It tells you a lot about Roman cooking that Apicius gives two ways of cooking boar and seven different sauces to serve with it, but here's the mainstay:

"Wild boar is prepared thus: it is cleaned; sprinkled with salt and crushed cumin and thus left. The next day it is put into the oven; when done season with crushed pepper. A sauce for boar: honey broth, reduced wine, raisin wine."

The oldest Arabic cookbook was published in ancient Baghdad by Ibn Sayyar al-Warraq under the name The Book Of Dishes , and he didn't leave anything to chance: it contains a whopping 600 dishes for a variety of occasions. But the most famous one is the kishkiyya, otherwise known as the "hangover stew".

al-Warraq's book likely contains a lot of recipes that are older than him (he died in 961 AD), but we have no way of knowing just how ancient the kishkiyya really is. Regardless, it's full of goodness, including meat, chopped green vegetables and large amounts of herbs, and simmers into a rich broth. The full recipe is rather complicated, but if your head is aching after a night on the tiles, it likely won't hurt you.

Frumenty is one of those dishes that underpinned an entire society for ages— in this case, medieval European communities — and has since vanished without a trace. It was essentially boiled wheat cooked in almond broth with sweet flavorings and added fruit, and was eaten alongside savory dishes like meat, because the sweet/savory divide is in many ways essentially a modern invention. We have several recipes for frumenty, but the oldest dates from The Forme Of Cury, a medieval recipe collection dating back to 1381.

To the modern palate, frumenty tastes closest to porridge, and some contemporary chefs have tried to recreate the 14th century recipe for their own restaurants. If you feel inclined, you can try too, but The Forme Of Cury is maddeningly imprecise, so don't get out your kitchen scales in readiness. It's also in Middle English, so you'll need a translation:

Nym clene Wete and bray it in a morter wel that the holys gon al of and seyt yt til it breste and nym yt up. and lat it kele and nym fayre fresch broth and swete mylk of Almandys or swete mylk of kyne and temper yt al. and nym the yolkys of eyryn. boyle it a lityl and set yt adoun and messe yt forthe wyth fat venyson and fresh moton.

[Take clean wheat and crush it in a morter well that the hulls go all by them selves. Take fair fresh broth and milk of almonds or sweet milk of cows and temper it all. and take the yolks of eggs. Boil it a little and set it down and present it forth with fat venison and fresh mutton.]"

If you're looking for the oldest known confection in the world, you needn't look further than the linzer torte, a tart with jam and a lattice pastry top. Its reputation as the most ancient of the cake recipes is down to the fact that its lineage has been traced back further than any other. It shows up not only in a 1696 recipe, but in a Veronese manuscript dating back to 1653, which was found in the Admont Abbey in Austria in 2005, causing shockwaves in the admittedly small world of historical pastry.

If you want to make the exact linzer torte of the Admont manuscript, you'll likely find something very different to the ones you'd get today. The book that broke the news, Wie mann die Linzer Dortten macht (How To Make The Linzer Torte), explains that linzer torte recipes have changed massively over the centuries, sometimes not even including the typical jam and lattice top. If you'd like to make one, it's probably best to stick to the version on Austria's national website.