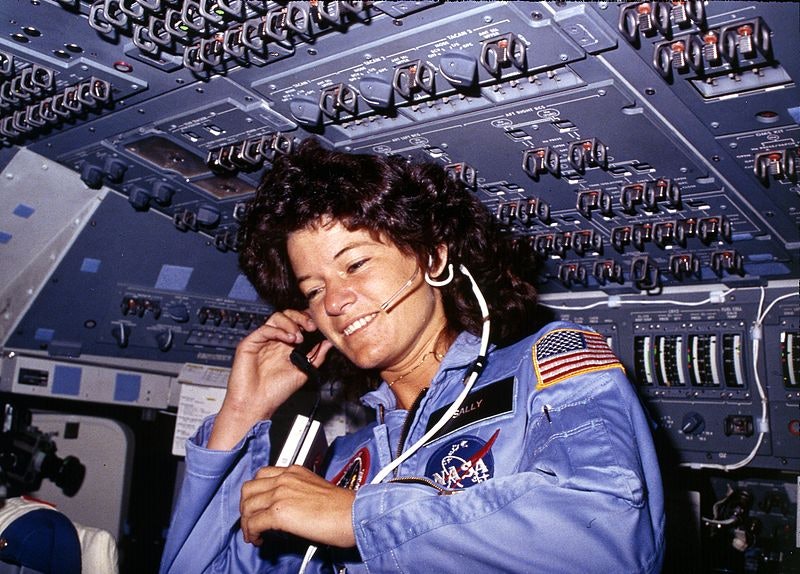 Today, May 26th, is a seminal day for women in American science: it's the birthday of Sally Ride, the first American woman in space. Ride, who was born in 1951, was a symbol for an entire generation of young women as she pushed through barriers into the boy's club of astronauts, gaining her title as the "first American woman in space" in June 1983 with a six-day mission. And though Ride's astronaut career involved two missions as a crew member aboard the Challenger (a space shuttle that sadly later became a household name due to the Challenger disaster of 1986), her career and legacy involve much, much more. If you ever wanted to be an astronaut as a little girl, Ride was likely one of your heroes, and though she died in 2012, a lot of her work for young women in STEM and education about space for children worldwide is still going strong.

Ride was just the beginning of female American astronautics; after her came Kathryn Sullivan, who performed a spacewalk; Shannon Lucid, the first female on a space station; and Mae Jemison, who became the first African-American woman in space in 1992. Space is no longer the final frontier for women, but at the time it was a colossal leap — and a slightly confusing one for some, as evidenced by some of the bizarre and sexist questions that Ride was asked at press conferences.

But even though Ride is a national hero any way you slice it, there are aspects of her biography that are less known than they should be. Being a woman in space was where her career began; but it wasn't where she ended. Here are five things you probably didn't know about the first American woman in space. Warning: may make you want to run off and email NASA for positions immediately.

1. She Began Her Career By Responding To A NASA Ad In A Student Newspaper

Ride was in the midst of finishing her PhD in physics at Stanford (focusing on X-rays and space, incidentally) when she spotted NASA's "help wanted" ad in the student newspaper. This is the sort of anecdote that boggles the mind nowadays, when elite talent searches are conducted through LinkedIn, obscure hand-shaking and "networking," whatever that means. But this was 1978, and NASA clearly believed an advertisement in the student papers of top tier universities would get them the cream of the crop.

Ride, incidentally, wasn't the only woman selected in this talent drive; she was one of six chosen out of nearly 8,000 applicants. She also had a very varied CV; alongside her PhD and Masters in Physics, she also had an undergraduate degree in English and had been a nationally ranked tennis player.

2. She Was Asked If Space Flight Would "Affect Her Reproductive Organs"

In an episode that has now become the gold standard in "how not to treat female scientists," Dr. Ride attended a press conference at the Johnson Space Center in 1983 before her maiden flight, which would make her the first American woman (and youngest American) in space. She appeared before the press with the other (male) astronauts who would accompany her on the space flight. So far, so good, right? But the questions directed at her were so unbelievable they might make you want to throw your phone (or whatever you're reading this on) across the room.

Among the shockingly sexist questions Ride was asked: "Will the flight affect your reproductive organs?", "Do you weep when things go wrong on the job?", and "Will you become a mother?" People magazine, which detailed her "asperity" and "calm, unrattled" responses to this sexist piffle, actually characterized the questions as "inane and almost insulting." Almost, they say. Fortunately, over 30 years later, it's now hard to imagine anybody asking things like that of female specialists. Oh, wait.

3. She Came Up With The Idea Of EarthKam

After her career at NASA ended, Ride became Professor of Physics at the University of California, wrote numerous award-winning children's books, and basically ruled the world. One of her most interesting contributions, however, was something called the EarthKAM, or Earth Knowledge Acquired by Middle school students, a project run out of NASA's Space Camp and the US Space And Rocket Center under her auspices. After serious testing on various shuttle flights, it's been operational since 1995.

EarthKAM is essentially a knowledge collection database that uses requests from middle schoolers to take pictures of various parts of the Earth from a specific camera based on the International Space Station. All the pictures are filed in the EarthKAM archive, which is designed to help children interact with space exploration technologies. It's a permanent fixture on the ISS, runs about four "missions" or photo-taking expeditions a year, and during its last mission took instructions about photographs from a whopping 912 schools all over the world.

4. She Was Not Public About Her Romantic Relationship

Ride's death in 2012, after a 17-month battle with cancer, was a shock to the scientific community for a number of reasons. The major one was that she was only 61 at the time; but many of her fellow scientists were surprised to learn, from her obituary, that she had been in a relationship with a woman, Tam O'Shaughnessy, for 27 years. According to a discussion of the revelation in Slate, O'Shaughnessy and Ride had planned a "coming out" of sorts at a party to celebrate Ride's achievements in 2012, but Ride had died before it could be celebrated, and O'Shaughnessy wrote Ride's now-famous obituary herself.

What ensued was a nationwide discussion about the "duty" or lack thereof of public figures (particularly public figures in science) to be open about their sexuality for the sake of visibility and inspiration to others. Ride herself, who was briefly married to a male astronaut before her relationship with O'Shaughnessy, saw the decision as personal; her sister Bear, a gay Presbyterian minister, circulated an essay on Ride to the press that explained Ride's "very fundamental sense of privacy" and "inherent Norwegian reticence," while also explaining that she was always out to her family and that her relationship with O'Shaughnessy had been accepted by Ride's family for years.

5. She Ran An Organization Inspiring Young People In STEM

O'Shaughnessy and Ride collaborated in founding Sally Ride Science, which Ride regarded as her passion project and with which she served as President until the day of her death. It was relaunched at UC San Diego in 2015, and its purpose is "to inspire young people in science, technology, engineering, and math (STEM) and to promote STEM literacy." Getting people, particularly young women, involved in STEM as early as possible was one of Ride's biggest drives, and Sally Ride Science is explicitly skewed towards the youngest generation in schooling. If you ever did a "Cool Careers In STEM" module in school, Sally Ride Science was likely responsible.

In one of the more interesting moves in the STEM education movement, Sally Ride Science's latest event, announced in February 2016, involves STEAM: science, technology, engineering, art and mathematics. And it's explicitly for girls. It's a collection of summer weeklong workshops where girls from grades 6 to 12 can "assume the roles of geophysicist, space scientist oceanographer, and computer engineer." Which frankly sounds like the best week ever — I am highly tempted to disguise myself as a 14 year old and try to sneak in.

More like this
13 Selfie Instagram Caption Ideas That Exude Main Character Energy
By Jessica Booth and Emma Carey
Samsung Just Dropped 2 New Foldable Smartphones
By Michelle Toglia
Your Daily Horoscope August 11, 2022
By Mecca Woods
How To Use The Like To Know It App To Buy Influencers’ Faves
By Emma Carey
Get Even More From Bustle — Sign Up For The Newsletter