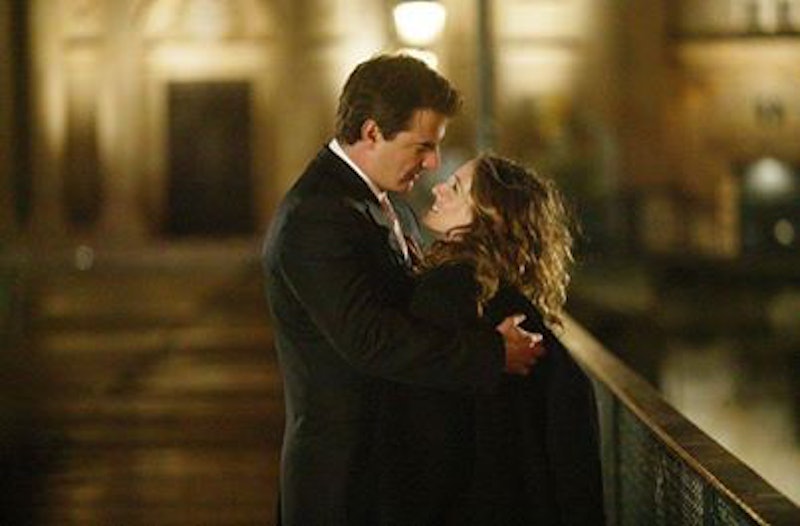 I was too young to really appreciate the show when it came out — hell, I was in my teens when the show came to a close. Still, on the tenth anniversary of Sex And The City ’s final episode, it’s impossible for me to not at least begin to pontificate the reasons I loved the show, and why I still watch re-runs, and why am quick to call myself a “Carrie” before I call myself a “Hannah” — even though I’m closer in age and financial status to Hannah Horvath than I am to Ms. Bradshaw.

Even as a teenager, as I inappropriately gathered at sleepovers with my fellow female friends, in sheer awe of Samantha’s sexual prowess as we silently hoped that one day we could ascertain that sort of orgasmic confidence, it was obvious that this show was monumental. The conversation always surfaced back to the same thing: who’s a Carrie? You’re the Miranda of the group. No, you’re the Charlotte! You’re the Samantha! After my friends and I saw the movie back in 2008, the conversation re-circled, and we noticed how as we got a little older, our places in our group had changed. Anyone who spoke loudly of sex or owned a vibrator was the Samantha, whoever waxed philosophically or Live Journaled was the Carrie, the virginal one was the Charlotte, and the no-nonsense (but most likely to succeed) one was the Miranda. There was nothing shameful about any of these characteristics; they were simply human attributes.

In a sense, all of those attributes are compliments. I love the schadenfreude behind Girls with its ugly exploitation of what it is to be a self-involved twenty-something, but only do my dearest adult friends quietly say to me what a Marnie like thing that was to whine about, or how inappropriately asking someone to read my writing during a time of crisis was such a Hannah thing to do. These are not compliments, but because the girls on the show are in our age bracket, they serve as bleak parallels for us to solemnly draw upon at times.

Not with the Sex And The City women. Yes, that’s the key word — women. That may be the reason the show played such a role in my teen years. That part of life, those years, those experiences, those sad post-it break ups, those shoes, those encounters were so distant from me, that I could easily see traits that I either wanted to or did not want to possess. I’m not saying that Sex And The City women served as role models, as they were flawed and lived lives of opulence and excess, but I will say that they were simply models — models of different components of womanhood. They were models of when we think too much. They were models of how sexuality does indeed exist for women, and how it can exist on a variety of levels — not just as a Madonna/whore complex. They were models of failed relationships. Moments served as exhibits (albeit sometimes exaggerated exhibits) of things that happen in an adult woman’s life, amidst a backdrop of Fifth Avenue and dressed in designer costume pieces.

The love lessons that surfaced in the series, while they were targeted towards women in their thirties, struck chords in younger women. Not every man will be The One, but that particular man might be out there. Men can be cads, but at the end of the day, it’s okay to sit with your girlfriends and drink cosmos to mourn the bleak ending of a relationship. Friendship is more powerful than anything, but sex and love are fueling, powerful realities, and beyond that — it’s okay to love and pontificate over relationships. It’s an inherent part of being a woman.

But on the ten year anniversary of the show, as I’m reading essays of other women who share similar sentiment and appreciation for the truths that series shed light on, the age-old question is resurfacing — and perhaps because it’s a valid question. These characters contained such rich attributes, that’s impossible not ask the question, which is a testament to the show’s enduring writing. It only confirms that as girls and as women, we saw identifiable traits in these women.

So: which one am I? Maybe I’m a little bit neurotic. I am confident with my sexuality. I possess optimism that can be easily shaken. But here I am, sitting here on my Macbook, typing this essay, endlessly musing and pontificating, doubting, questioning, and writing about it. It's not too difficult to realize exactly which one I am. Ten years later, that’s the first thing I think of, and ten years down the line, when I’m careening towards forty, I’ll probably still think that.

So I just might be a Carrie after all.

More like this
Who Is Allison Williams Dating After Her Divorce? She’s Engaged With A Child
By Jake Viswanath
The Banned 'Friends' Ad Shows Monica As You’ve Never Seen Her Before
By Sam Ramsden
Ashton Kutcher Wants Danny Masterson “To Be Found Innocent” In Rape Retrial
By Jake Viswanath
'Abbott Elementary' Fans Probably Missed This 'Parent Trap' Easter Egg
By Sam Ramsden
Get Even More From Bustle — Sign Up For The Newsletter
From hair trends to relationship advice, our daily newsletter has everything you need to sound like a person who’s on TikTok, even if you aren’t.