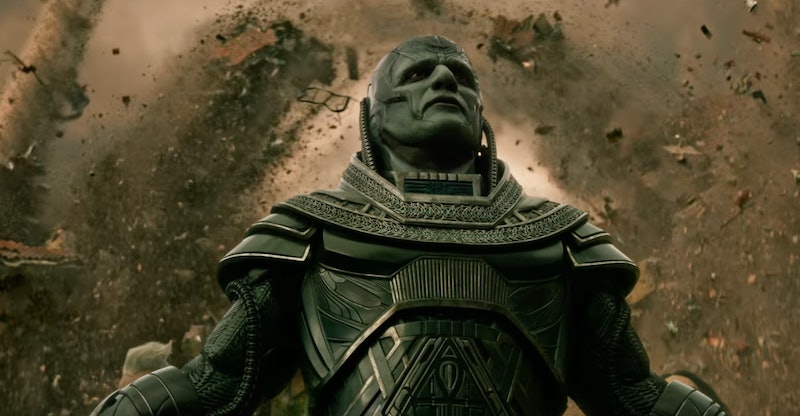 Based on the movie's title alone, you'd expect that the X-Men: Apocalypse ending would feature events that shock the world, and maybe even destroy it. With the new mutant villain Apocalypse joining the X-Men universe, all bets are off. The end of the world is coming, but will it actually come to fruition? If you don't want spoilers for Apocalypse, then stop reading right now! ...Are you gone? Good. Now, for you spoiler-lovers, here's how X-Men: Apocalypse ends: the world does not end and Apocalypse is (seemingly) defeated. The ending to X-Men: Apocalypse also sets up the creation of the new X-Men and sees Charles finally transform into he Professor X we all know and love. Let's dive in.

The peaceful end to X-Men: Apocalypse comes at quite an expense. After Apocalypse recruits his four horsemen — Magneto, Storm, Psylocke, and Angel — he kidnaps Charles and takes him to his ancient pyramid in Cairo, where Apocalypse can transfer his consciousness. Hot on their tails are the X-Men, or what's left of them, as Hank, Mystique, Quicksilver, Nightcrawler, Jean Grey, and Cyclops prepare to fight to bring Charles home safely. After an epic battle, the X-Men succeed and Apocalypse is defeated. But that's not really what is intriguing about the Apocalypse ending, is it? No, what's important is how the ending sets up the future of the X-Men franchise. Here's everything you need to know about how the X-Men: Apocalypse ending sets up future films.

In the climactic final battle, Magneto, under the sway of Apocalypse, uses his powers to essentially summon or destroy everything on Earth made out of metal. Bridges snap in two, buildings disintegrate, and the casualties increase exponentially with each passing second. Now, in traditional X-Men form, the casualties are never mentioned or seen — seriously, you don't see one dead body in the final battle. However, looking at how both DC's Man of Steel franchise and the Marvel Cinematic Universe have had to address their large casualties in films, it's likely that this almost-apocalypse will have some consequences in future X-Men movies.

Jean Grey embraces her powers fully and manages to defeat Apocalypse by seeing into his mind. Jean's powers are still developing, but it's clear from the film that she is the most powerful mutant there. And, what's even more frightening (or exciting, depending on how you look at it), is that she's not even fully in control of her extraordinary powers when she kills Apocalypse.

In the end of the film, Apocalypse is planning on transferring his consciousness into Charles' body so that he can absorb his powers. Unfortunately for Charles, this process involves, for some reason, making him bald. As Apocalypse begins to take over his body, Charles' hair falls out, likely because he is about to be transformed into a big, blue mutant. Long story short: the Charles Xavier seen at the end of the film looks a lot more like our dear Professor X from the comics.

Charles also ended the film by giving Moira MacTaggert her memories back, hinting at a possible romantic future.

Though Magneto spends a majority of the second act under Apocalypse's spell, he backs out of the mutant's plan for worldwide destruction at the very last minute, thanks to Mystique and Charles, who are able to remind him of his humanity. He might still be an international fugitive, and he's definitely not completely on board with Charles' plans for his School for Gifted Youngsters, but he doesn't want to kill all humans anymore, and he and Charles go their separate ways on good terms.

In X-Men: Apocalypse, Quicksilver is determined to find Magneto and reveal himself as his son, but, when he finally gets the chance, he chooses not to. The movie ends with Quicksilver deciding not to tell Magneto his true identity just yet. Instead, he joins the X-Men.

During the final battle, Storm switches sides when she sees how the X-Men work together and understands that Apocalypse is really fighting for his own power, not to protect her and other mutants like her. Storm goes from fighting Cyclops to turning her powers of extreme weather onto Apocalypse himself, and even returns home with the X-Men to join their fight.

After they defeat Apocalypse, Mystique and Hank return to Charles' school to train a new generation of X-Men warriors. Among their new students are Jean Grey, Scott/Cyclops, Nightcrawler, Quicksilver, and Storm.

The future of the X-Men franchise is a bit uncertain, with stars like Jennifer Lawrence unconfirmed to return. But, if the ending to X-Men: Apocalypse is any indication, there is still a lot more to come.