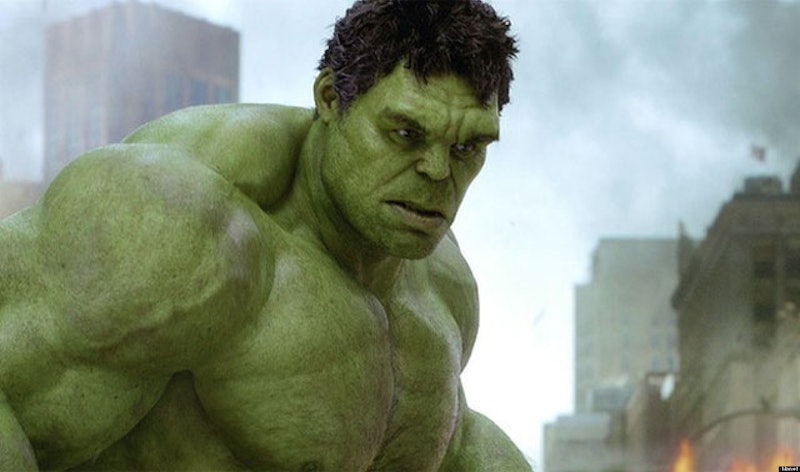 The Avengers certainly stepped up their game in Marvel Cinematic Universe's latest installment, Captain America: Civil War. However, despite the team additions of characters such as Spider-Man, Ant-Man, and Black Panther, one of the crime and alien fighting heroes wasn't on the scene: the Hulk. Bruce Banner left the destructive and well-intentioned heroes behind at the end of Age of Ultron, so fans didn't get this year's dose of big green anger. Thankfully, Mark Ruffalo took time to address not only his character, but what fans can expect in Marvel's upcoming 2017 release, Thor: Ragnarok. And let me just say that it seems like Hulk's role in Thor: Ragnarok is finally going to make up for the fact that Ruffalo never got to act in his character's 2008 solo film.

“I think it’ll be smashing. You’ll see a lot more Hulk in this one [Thor: Ragnarok],” Ruffalo joked with Now You See Me cast member Woody Harrelson. "The Hulk gets Hulk-ier. The Hulk Hulks out. Hulk-ier and bigger." So, aside from the Hulk being more of a major character this time around, it seems like he may be the character to watch. You know. If you're not there for that Thor guy. While Captain America was feuding with Iron Man, the Hulk and Thor have been building what may be a seriously budding bromance. According to Screenrant.com, Ruffalo described the upcoming film as, "an intergalactic buddy road movie with Banner and Thor." That's quite a turn around.

Budding bromance aside, I'm especially curious about what Ruffalo means in regards to the Hulk getting "Hulk-ier." The last that fans heard of Banner was that he landed in Fiji, according to a message sent from Nick Fury at the end of The Avengers: Age of Ultron. It seemed as if he was taking some much-needed time for himself after his serious struggle with controlling himself. (Needing the help of Natasha Romanoff to calm down and return to his human form must have taken quite a hit on how he feels about his place among the rest of them, even before Scarlet Witch got involved.)

However, with the Hulk now joining Thor in what I would assume to be the God-filled city of Asgard, perhaps his whereabouts all of this time weren't in fact Fiji. Perhaps, fans will in fact get the Space Hulk comic book stories they've been waiting for. Anything is possible for his character's continuation in the MCU — especially when the word "Hulk-ier" is getting thrown around.

What fans do know for sure is that the Hulk has Thor's back in next year's big Avengers film. And, based on what we've seen in the past, it seems like there's nothing that the Hulk can't handle when he gets angry. Thor... You're going to be just fine.