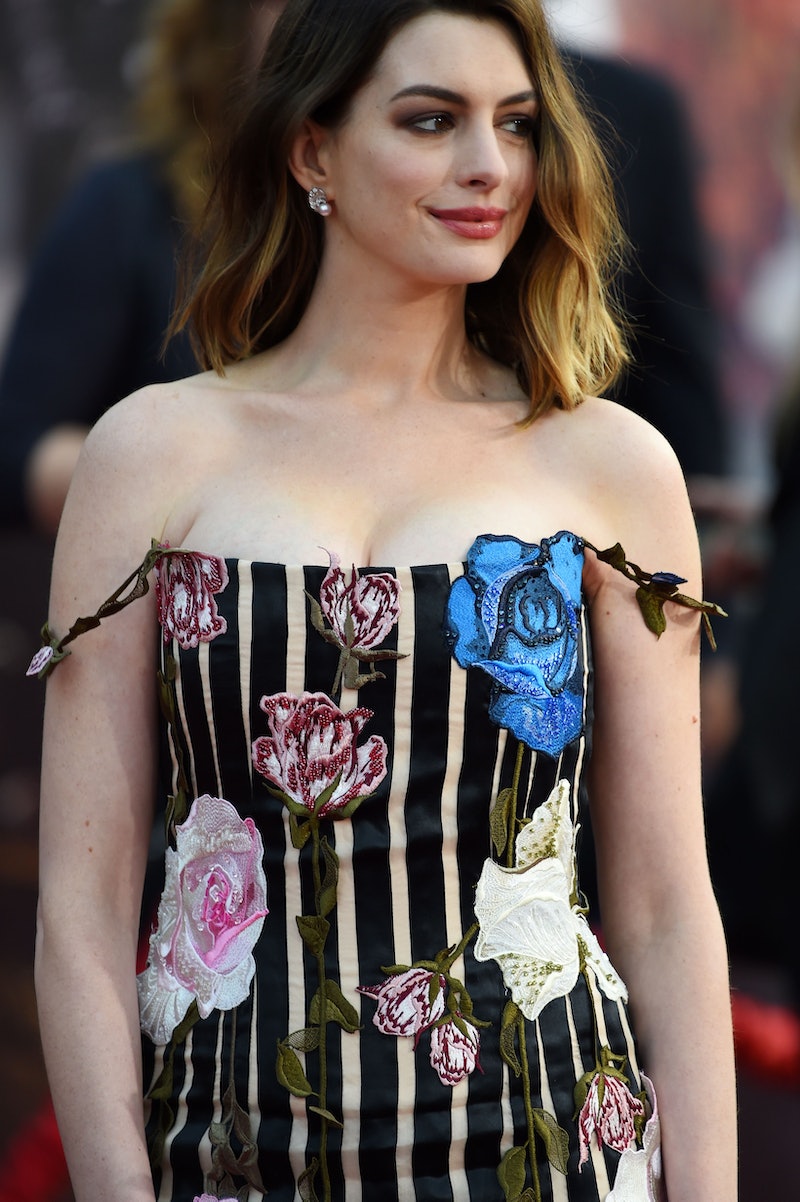 If there's one thing the Kardashians are used to, it's shade. If there's one thing we're used to from Oscar-winner Anne Hathaway, it's her tendency of being a little... theatrical. Nevertheless, the Alice Through the Looking Glass star has been praising the female sex a lot lately, and I'm loving it. Unfortunately, she just got a little caught up in the social media troll tango when admiring her Alice co-star and bonafide badass, Helena Bonham Carter. Apparently Hathaway threw shade at the Kardashian family when she posted a photo of Carter with the caption: “In a world of Kardashians… Be a Helena Bonham Carter.” This did not take kindly to Instagram. I'd dive deeper to see what the trolls had to say, but I'm a honestly little scared and haven't even finished my Starbucks yet.

It looks like Hathaway couldn't take the heat either, and reportedly removed the photo from her Instagram, later swapping it out with a new one and apologizing. I agree in that no one should put down females to praise other females. However, I think it's totally justified for Hathaway to point out the differences between the Kardashian klan and her esteemed colleague Carter. I really wish she didn't back down from her opinion and succumb to the trolls in a world where everyone does feel a little bit of pressure to be like the Kardashians. Plus, the family does have very literal differences from Carter that Hathaway could've been referring to, and should be pointed out here.

The Kardashian family thrives off that spotlight promo, while Carter just sort of chills out in between slaying our lives with her always-epic movie roles. Both preferences are OK! But if you're on the shy or private side, allow Carter be your muse.

Their Families Are Super Different

The Kardashians are made up of five sisters and one brother, whereas Carter is the only female holding it down in her family of two other bros. When over that sisterly rivalry, just think: WWHBCD?

Again, both are OK. No one is judging you based on what you would prefer except yourself. And maybe Ryan Seacrest.

The Kardashians' long-flowing locks and dresses that hug their curvalicousness have become iconic. I admit, I channel them every now and then. (Shoutout to the middle part.) But, for those who fancy an up-do and/or goth-chic vibe, Carter is your style goddess. Could even depend on the day, TBH.

Kim Kardashian built a kingdom from the beloved selfie, meanwhile Carter probably doesn't even know what Instagram is. Actually, the whole reason Hathaway found herself in this mess isn't even a factor in Carter's life. Twitter fingers could provide that pick-me-up or life so many crave. But if you're #OverIt, Carter is your spirit guide. And choosing to keep a lock on your private life is, in all likelihood, what Hathaway meant by her original post in the first place.

So everyone chill out and realize that all females are bomb for their unique, respective reasons, mmkay?