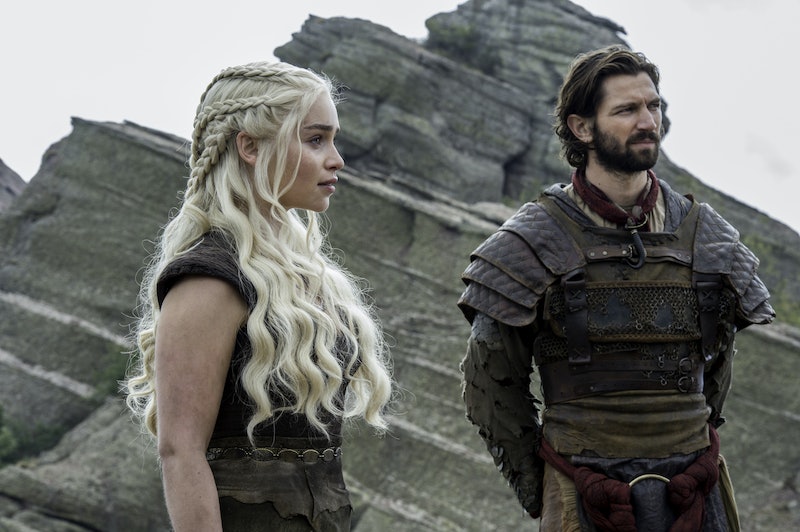 Swoon-worthy as he may be, a certain sellsword has always been a somewhat suspicious figure — can Daenerys trust Daario Naharis on Game of Thrones? It's looking more and more likely that he may betray his beloved. And, it doesn't come entirely out of the blue. After all, it's not as if the guy has a spotless record — remember how he first came into her employ? Yeah, he murdered two of his compatriots and switched sides faster than you could turn on a dime. Sure, they were sexist assholes, but it doesn't exactly speak well of his sense of loyalty. He's currently one of the less trustworthy members of her inner circle (and that inner circle currently contains known epic schemers like Lord Varys and Tyrion Lannister). Heck, even Game of Thrones co-creator Dan Weiss described Daario in the Inside the Episode featurette as "a bad boy who seems like a good idea to her at this moment."

Jorah Mormont may be the biggest proponent against him — tensions have always been high between the two of them, and as Dany's most trusted advisor, Ser Jorah advises her against trusting Daario pretty much every single time he comes up. Of course, his view of the guy might be somewhat tainted by jealousy — after all, as he heartbreakingly admitted in "The Door," he's in love with Daenerys (which was a total shocker, right guys?). Jealousy or no, Ser Jorah's a smart man — and his (numerous) warnings may have some truth to them.

It's also worth noting that Daario skews a little more sketchy in the books — part of this is likely due to Michiel Huisman's ultra-charismatic performance, though part of it comes down to certain insights that didn't make it onto the show. Ser Barristan died an untimely death back in Season 5, but for the books he actually sticks around a lot longer — and makes many observations about Daario along the way, perhaps most notably near the end of A Dance With Dragons.

Following Daenerys' epic escape on Drogon (and subsequent disappearance), her remaining advisors discuss their next steps — and Ser Barristan and Skahaz mo Kandaq (a character not included in the show) basically agree that it wouldn't be such a tragedy if Daario were to mysteriously go missing. Neither man trusts his loyalty — Skahaz intones, "Better for all of us if he is dead, yes? Better for Daenerys too," while Barristan later thinks, "Daenerys Targaryen loved her captain, but that was the girl in her, not the queen. Prince Rhaegar loved his Lyanna, and thousands died for it." He goes on to list a half dozen or so more examples of true love gone wrong, only to cap things off with a definitive, "Her love for Daario is poison. A slower poison than the locusts, but in the end as deadly." (The locusts are a reference to the fact that someone — likely her short-term husband Hizdahr zo Loraq — tried to assassinate Dany using poisoned locusts).

In the books, even the ever-so-smitten Daenerys is more than aware of Daario's less-than-honorable nature — at one point, halfway through a rather dirty reverie, she reminds herself that he is attracted to her power and position above all else. "If I gave up my crown, he would not want me," she muses. It's not enough to stop her from continuing her torrid love affair — but how much does that say though, that even Dany — the one person who actually likes the guy — doesn't even fully trust him?

Now, I love Michiel Huisman as much as the next rational person, but it would seem the chips are stacked against his charming sellsword of a character. After all, as we learned in the House of the Undying, everyone's favorite dragon queen will know three betrayals — one for blood, one for gold, and one for love. Jury's completely out on all three — along with Daario, Jorah, Drogo, Drogon, Hizdahr, a book character named Brown Ben Plumm, and even Jon Snow are all potential betrayal candidates. Some even believe that the prophecy refers to betrayals Daenerys herself will commit/has already committed. It's quite possible that Daario won't end up factoring into the prophecy at all, though it's important to remember that it exists. And that he's generally untrustworthy.

And that this is Game of Thrones, y'all. No one is above high treason.

More like this
'The Simpsons' Will *Finally* Address How They “Predict The Future”
By Sam Ramsden
'The Sandman’s Ending Is A Departure From Neil Gaiman’s Comic Book Series
By Kadin Burnett
The 'PLL: Original Sin' Creators Say A’s Identity Will Be “Very Clear” By The Season Finale
By Alyssa Lapid
A TikTok Conspiracy Theory Is Doing The Rounds About Stranger Things Season 1
By El Hunt
Get Even More From Bustle — Sign Up For The Newsletter