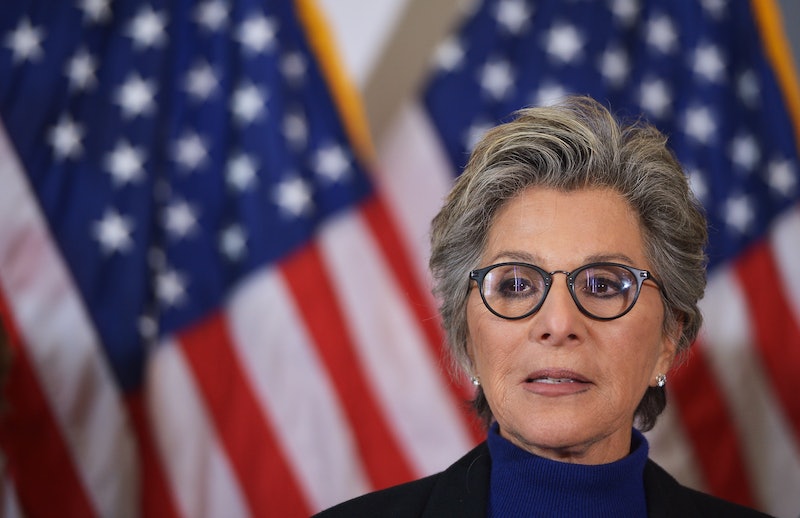 Ever since it premiered, Handler has been using her Netflix series to promote ongoing dialogue about the 2016 election and encourage all Americans to be active participants in the political process. In the May 25 episode of Chelsea , Handler's interview with Senator Barbara Boxer covered a number of important topics, including voter suppression and what it's like to be a woman in a male-dominated field. And, viewers even learned a fun fact about Boxer — she copes with the stress of her job by writing limericks, and she wrote one especially for Handler.

Handler and Boxer began the show by discussing the ramifications of the 2013 Supreme Court decision to strike down Title 5 of the Voting Rights Act. As Boxer explained, Title 5 required that states with a history of discrimination at the voting booth obtain pre-clearance from the Justice Department prior to changing their voter ID laws. She noted that the 5-4 decision to strike it down has had a negative impact on the black community, immigrants, students, and the elderly. Boxer also drove home the point that voting isn't just our right, it's our responsibility — when people ask her what's at stake in each election, her answer is "everything." Whether we're concerned about climate change, equal pay, or immigration reform, it's all on the table and our votes matter.

The California senator also emphasized that she's known both Hillary Clinton and Bernie Sanders for years and it's important to remember that the two candidates want many of the same things for America — they just have different ways of going about it. There's a great deal of tension within the Democratic party right now and her reminder is more relevant than ever. Despite Handler's good-natured probing, Boxer declined to answer whether or not she would consider being Clinton's running mate.

Boxer acknowledged that working in a male-dominated field isn't always a picnic, but it's key to "stand your ground" and "be tough." She added that she maintains a sense of humor when things get difficult and revealed that she copes with the stress of her job by writing rhymes and limericks — and Boxer wrote one just for Handler. (Yes, she wrote it herself and brought along her handwritten notes to prove it.) The limerick was pretty amazing, so let's take a minute to appreciate it:

When I was asked to appear on Chelsea's showMy heart said yes, but my staff said, "No!Don't risk the chance of a bleeped out wordYou could stammer, you could blush, you could look absurd"I said, "You simply can't be scared about something newAnd ruin a chance to see the world from Chelsea's view"It's like going to school, but it sounds OKI'll just agree with Chelsea and I'll get an AAnd if I get a question and I'm really stumpedI can always change the subject to Donald TrumpWomen should help women, even if we sometimes grouseOne of us can even see Russia from our houseIn conclusion, I'll go on 'cause Chelsea tells it like it isWe can use that kind of talk in the politics biz

Hats off to Boxer for her 40 years of public service and her impressive limerick skills.