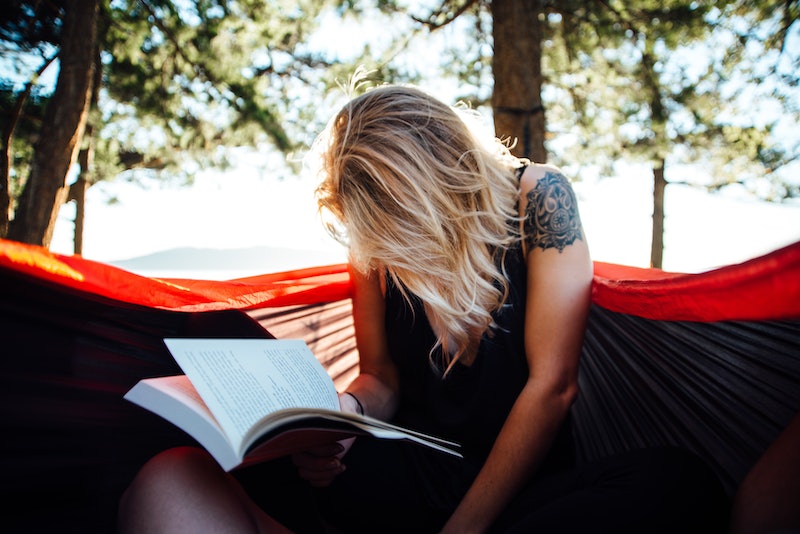 A few weeks ago, I decided to treat myself to a drink after work at Absinthe, an upscale brasserie in San Francisco that serves fancy cocktails, oysters, and other delectable fare. I’ve been an occasional patron of this spot for long enough to watch the bartender’s beard turn silver, a fact he noted as I sat down at the lone empty seat at the bar. To my right were two men in crew neck sweaters talking animatedly. Despite his high level of engagement in his conversation, the guy at my elbow paused to comment when I pulled a book out of my bag and began reading.

About half an hour later, he turned to me again to ask what it was I was reading. I showed him the cover of Helen Oyeyemi’s What Is Not Yours Is Not Yours and explained, when he inquired, that it was a collection of short stories. It was clear by then from the man’s expression and tone of voice that, though I was making no noise in this already noisy bar, though I had done nothing to draw attention to myself in any way, he was irritated by my presence. When his friend left, I half-expected him to try again to engage my attention, but to my relief he busied himself with his phone. Apparently my activities were only worth interrupting when he had an audience.

I enjoy being in the company of other humans without having to directly interact with them. But some men seem to find this behavior threatening and many are not subtle about it.

I am the kind of woman who goes to bars alone and reads books, regardless of poor lighting or noise level. I have a tremendous ability to block out surrounding sounds and distractions, and can lose myself in a book even amongst a noisy, boisterous crowd. It’s just a talent I have, and I don’t see any reason not to employ it. I enjoy being in the company of other humans without having to directly interact with them. I enjoy having a cocktail by myself while engaging with a piece of fantastic literature. But some men seem to find this behavior threatening and many are not as subtle about it as the guy at Absinthe.

An older man at a bar near my apartment once accosted me repeatedly, declaring that he did not believe I was “really reading.” He then began lobbing inappropriate questions at me, demanding to know my ethnicity, if I had a boyfriend, and, if not, was it because I was a lesbian? I confess that because of his age, I felt compelled to be polite to him. Eventually, I told him I really did want to read my book and turned away. When he finally left the bar, he gave a parting shot, declaring once again that he didn’t believe I was reading. “Well, I am,” I shot back and returned to my book, a memoir-ish meditation on single woman-ness entitled Spinster.

This experience was strikingly similar to that of an acquaintance, whom we’ll call May. A former co-worker approached her at a bar where she sat reading. Despite her lack of interest, the acquaintance harassed her with personal questions, such as why a man hadn’t accompanied her to the bar and what kind of girls she liked. “I asked him to leave me alone,” May said, “and instead he bought me a drink and got upset when I didn't drink it.” When he went to the bathroom, May made her escape.

Perhaps what is so subversive is not just the aloneness of a woman at a bar reading a book, but the combination of her aloneness with her lack of interest in the men nearby.

May shared her story with me via Facebook, which I used as a platform to discuss my experience. I expressed a desire to one day open a bar lined with bookshelves, a place that would be open only to women-identified patrons who could sip cocktails named after famous female writers and heroines while reading their books, free from harassment by men. I proposed calling the bar “Books and Bitches,” “Bitches and Books” or maybe just “Books, Bitches!”

I received hundreds of likes and positive reactions, but some of the comments saddened me. One friend shared a story of visiting one of her favorite haunts, an Italian restaurant close to her house: “The guy talking to me acted all shocked and offended that I didn’t want to talk to him. Like I was being mean and it was third grade,” she said. Another friend commented, “That’s why I don’t read at bars anymore,” then suggested we all get together and form a group of book-reading, bar-hopping women, bonded by our mutual disengagement. As much as I love that idea, which could function as a kind of performance piece that would comment on women’s presence in public spaces, the whole point of reading alone at a bar is that you are just that — alone. Yet, aloneness, for a woman, is a complicated state of being.

Something ugly happens when a solitary woman enters public space. Much has been written about street harassment, about the lack of safety women feel out in the world, about the threat to their bodies and well-being strangers can pose as a way of expressing dominance. I can look you over, stare at your tits, a harasser’s behavior says. I can comment on any part of your body, make lewd suggestions, call you names, and you can’t do anything about it. I can command you to smile. It’s a reminder of our vulnerability, a way of keeping women in their place by reducing us to the physical and disregarding our beliefs, our value, and our autonomy as human beings.

While there really is nothing radical about a woman alone in a progressive, cosmopolitan city like San Francisco in the year 2016 doing something as simple as reading a book, the behavior is still greeted by some as an act of defiance. Perhaps what is so subversive is not just the aloneness of a woman at a bar reading a book, but the combination of her aloneness with her lack of interest in the men nearby. Reading sends the message to the man next to you at the bar that you are interested in the writer’s ideas, not his. It tells him you are not there seeking his attention, which is probably why that older “gentleman” set out to prove that I was not “really” reading, that it was all a subterfuge. Surely my true goal must have been to get picked up or, if not, then I must be a lesbian, a woman living outside the heteronormative convention of husband and attachment. He viewed me as a presence whose value and purpose were relative to his own. What was my relationship to him if I didn’t desire his attention? How could I define my own value if it wasn’t determined by my attractiveness to a man, even one old enough to be my grandfather and so intrusive as to make him unappealing in every way? How dare I be out there, by myself, not giving a f*ck?

And yet, the number of women remaining on their own for all or a greater portion of their lives is larger now than it has ever been. In All the Single Ladies, Rebecca Traister charts the progression of the single American woman and notes how the marriage age is currently at an all-time high: “In 2012, unmarried women made up a remarkable 23 percent of the electorate.” The irritating, presumptuous men out there who feel free to accost women who dare to go out alone and read over a cocktail are perhaps representative of a subtle but pervasive reaction to women’s increased autonomy. They’re going to have to get used to it, though, because women like me aren’t going away; we’re only increasing in numbers. And that means more potential readers patronizing bars all on their own, out to just enjoy a cocktail and a good read.