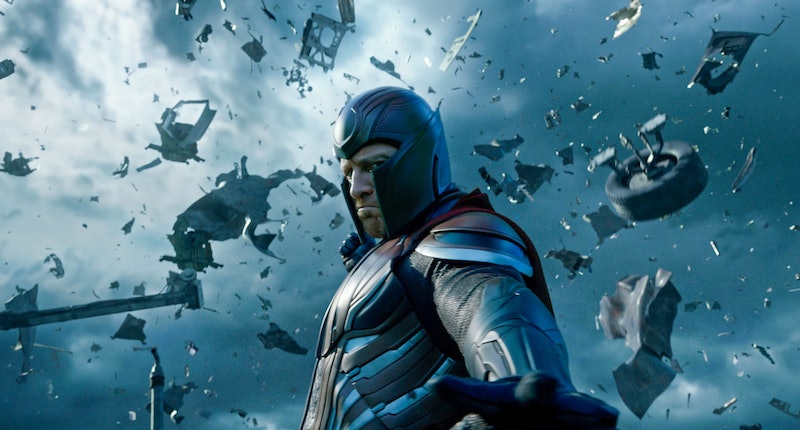 One of the things that makes Apocalypse such a powerful villain in the newest X-Men movie is his power of persuasion. In fact, it's this power over all his mutant powers that is most effective in his evilness, because it allows him to sway other, powerful mutants to his side. As explained in the film, Apocalypse never works alone, he always travels with four sidekicks by his side — the four horsemen of the Apocalypse. in fact, when he emerges in X-Men: Apocalypse, his first order of business is to recruit his four allies. But just who are the four horsemen, and what do they want?

When director Bryan Singer was developing the script for Apocalypse with Simon Kinberg, Michael Dougherty, and Dan Harris, he researched cults and cult leaders to help him determine how Apocalypse might go about choosing his four horsemen, according to an interview he gave with Collider. Singer described how he likened the four horsemen to four factions typically found in a cult. "We started looking at cults and the nature of cults, because cult leaders, true cult leaders, develop god complexes and he always traditionally had four horsemen so I thought a cult has traditionally four factions to it that interest me," Singer said. Those four factions — political, military, youth and sexual/seductive — are each represented by the four horsemen in X-Men: Apocalypse .

Each horsemen is looking for something when they meet Apocalypse. Whether they seek love, acceptance, leadership, or revenge, the four mutants find what they want in Apocalypse, and he preys on that desire. Apocalypse himself, Oscar Isaac, agreed that his character works the same way a cult leader would, telling IGN, "They find people that are in need of something and try to fulfill that thing in them — as it relates to every one of the Horsemen." Here's a rundown of each horseman, with some minor spoilers ahead:

The first horseman recruited by Apocalypse, Storm is a young, teenage mutant who is able to manipulate the weather. An orphan, she lives a life of poverty in Cairo and uses her powers to steal from the local market to survive. "She believes in him because for so long humans have treated her like crap," actor Alexandra Shipp explained in an interview with Collider .

Psylocke is the second mutant to join Apocalypse's crew, and she does so after impressing him with her fearlessness — she holds her plasma sword (the main power we see her exhibit in the film) to his throat — and her knowledge of other mutants and potential recruits. She is certainly the most strategic of the four horsemen, making her crucial to the military faction, and yet she is also the main source of recruitment, which makes her a part of the sexual faction. (It also doesn't hurt that her Apocalypse-approved makeover includes ditching her coat and pants in favor of a tight, bathing-suit style body suit.)

On a tip from Psylocke, Apocaypse goes after Angel, a mutant who, you guessed it, has angel wings. Unfortunately, Angel was captured by humans and forced to fight other mutants to the death in an underground fight club. Mystique crashes the club and allows him to escape, but not before Angel's wings are severely burnt and damaged, impairing his ability to fly. Apocalypse gives Angel a new set of metal wings and enhances his power, making him a very loyal and lethal soldier.

Like Angel and Storm, Magneto is at a low point when he meets Apocalypse. His family has just been killed by ignorant humans who fear mutants, and he wants revenge. Magneto has always been tempted by the dark side, the side that believes that mutants are superior to humans and deserve to be treated as such, not persecuted. Apocalypse speaks to that part of Magneto and elevates it to inspire world-wide destruction. "It's like that classic thing of joining any cult or radical group, he's [Apocalypse] caught him at a very low, vulnerable point where he doesn't really care anymore whether he dies or not or what happens," Fassbender told Collider .

Given the drive and power of each of the four horsemen, I wouldn't want to be the suckers that have to fight them. Good luck, X-Men.