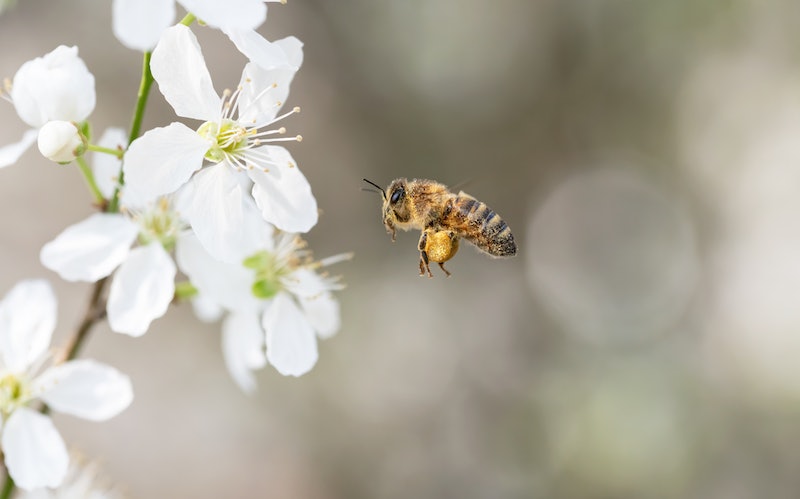 If the sight of swarming bees gives you the heebie jeebies, it's a good thing you aren't the owner of the silver Mitsubishi Outlander currently making headlines — the car is covered in more than 10,000 bees in pictures currently making the rounds that were snapped in the Welsh town of Haverfordwest. It's truly a sight to behold, and it prompts a question that's both fascinating and kind of terrifying: Why do bees swarm? Because if it's at all possible to avoid a similar fate with my own set of wheels, by all means, I'd all like to get to the bottom of this bee-havior.

First, what happened to that car? Here's the story: Hoping to squeeze in a bit of afternoon shopping this week, the Outlander's owner parked and set off, reports The Guardian. Soon, along came a man by the name of Tom Moses, who happened to be a ranger at the nearby Pembrokeshire Coast National Park. Upon noticing a "brown splodge" (mental note: add "splodge" to my vernacular, immediately), Moses decided to investigate — which is when he realized the splodge was a buzzing clump of an estimated 10,000 bees. "I have never seen that many bees in one spot," he told The Guardian. "It was very unusual and then you go and take a closer look, it is quite spectacular." It's believed that the swarm was the result of a queen bee getting trapped in the trunk of the car.

And here's a close up:

Being the apparently super-decent human being that he is, Moses then stood guard for three hours to ensure no passersby wandered too close or did "something stupid." (Good call, Moses. Good call.) He also called the Pembrokeshire Beekeepers' Association, who sent out a couple of beekeepers to remove the swarm by luring them into a cardboard box. Did I mention Moses was stung several times in the process? Someone give that man a medal. Or, at the very least, a vat of fresh honey.

So, back to the pressing question at hand: Why did this happen? It's clearly an example of swarming behavior, but why do bees swarm in the first place? While you may not be able to steer clear of this phenomenon entirely — particularly in your nightmares — the science behind bee swarms offers a few explanations as to what caused so many buzzing creatures to flock over to that car.

1. In Defense Of The Queen

As previously mentioned, it's speculated that the queen of the bee colony had gotten trapped in the back of the car (gives new meaning to having junk in the trunk, huh?). Because the queen bee is critical to the survival of a colony — as she is the only actively reproductive female and, therefore, everyone's mama — it would make sense the workers and/or drones would fly to her defense.

When it comes to making decisions as a colony, bees exhibit a discipline shared by locusts, termites, and even birds and fish: swarm intelligence. The hallmarks of typical swarm intelligence are that it is composed of many individuals, the individuals are essentially homogeneous, and the behavior of the system is the result of the interactions of the individuals with each other and their environment. So, yeah, check off all the boxes in this case! The catch is that outsiders don't always understand the logic behind swarm behavior — only that there is logic to it.

Fun fact: When a drone bee goes off in search of a nectar source, it has a particularly jiggy way of alerting its colony. It dances. Yes, you read that right. If a scout finds a seriously legitimate source of food, it returns to the hive and shakes about 200 circuits to get attention. The more enthusiastically the scout dances, the more fellow bees it will inspire to follow. So here's a theory for the car swarm: Perhaps this colony had an overly enthusiastic scout who couldn't stop shaking its little circuits and attracting its brethren. Maybe the reason said scout was doing so was to gather help for the trapped queen. While we may never know if dancing played a part in this particular swarm, we do know it is documented bee behavior, so it's worth considering.

Sometimes scouting doesn't necessarily correlate with a food source, in which case scientists call it "novelty-seeking behavior." As part of a 2012 study, a team of researchers discovered a link between this behavior and a sort of neurochemical tool kit. In other words, scout bees come equipped with genes that have evolved over time that elicit something similar to a fight or flight response. An actual neurochemical reaction can trigger their desire to scout which, outside of seeking food, tends to occur when the colony needs a new nesting location.

More like this
Kim Kardashian Is Releasing A Line Of Earbuds With Beats
By Alexis Morillo
25 Things I've Reduced My Life To, In Addition To WFH In My PJs
By Ginny Hogan
How To Change Your Twitter Handle
By Emma Carey
13 Selfie Instagram Caption Ideas That Exude Main Character Energy
By Jessica Booth and Emma Carey
Get Even More From Bustle — Sign Up For The Newsletter