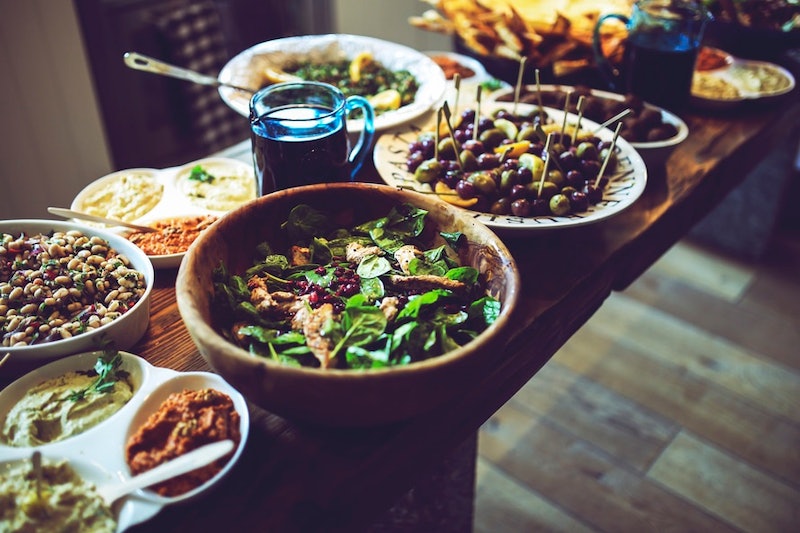 Is it just me, or in this day and age does everyone seem to have an opinion on foods you’re eating and their nutrition value? Perhaps it’s just the circles I run with, but I don’t think I can pick up a fork without someone offering up some myths about nutrition that are just that — myths. Likely, you are used to hearing rumors about nutrition, too, whether you’ve realized they’re rumors yet or not. That’s why I rounded up some facts on the topics backed by expert commentary in order to help expose these inaccuracies and get us all on the right track with the right information.

You know those people I’m talking about right? You sit down at a table in the office cafeteria and the colleague next to you immediately says something in the order of, “You’re going to eat that? Do you know how bad that is for you?” Then, you’re left sitting there questioning the meal, and your entire diet in general. The truth might have been that your lunch was a perfectly fine one — perhaps you were eating something a little heavy on the carbs, but they were the right carbs — but now you’re skipping the lunch altogether and sulking (not to mention, so hungry). To help you fight off some of those comments from the people around you who can’t help but chime in, this article sets out to let you know what notions you’ve been hearing that are flat-out false. Here are 11 common myths about nutrition debunked by experts.

1. Carbs Are The Devil

You’ve heard it seemingly a million, trillion times — carbs are so awful for you. Is it true, though? Not necessarily. LiveScience.com spoke to Lisa Mallonee, a registered dietician with the Texas A&M University Baylor College of Dentistry, who noted carbohydrates it’s the type of carbs we choose that can play against us. “The real problem with carbohydrates lies in the American diet rich in refined carbs and processed foods,” Mallonee said.

Mallonee told the outlet, though, that our bodies need carbs to remain fueled, and recommended a diet higher in complex carbs and lower in processed carbs.

In recent years I’ve neglected using my microwave whenever possible as I’ve heard it rids the food of its natural nutrients. I never thought to second guess this, but turns out I should have. According to Carol Byrd-Bredbenner, Ph.D., R.D., professor of nutrition at Rutgers University in New Brunswick, NJ, it’s not the cooking method, per se, that affects nutrients, but rather the cooking time and the level of heat. Ultimately, no matter what you’re using to cook — an oven, a grill, a microwave, etc. — you’ll be exposing the food to losing nutrients depending on those two factors. Byrd-Bredbenner told Eating Well, “The longer and hotter you cook a food, the more you’ll lose certain heat- and water-sensitive nutrients, especially vitamin C and thiamin [a B vitamin].”

3. You Should Avoid Eating Fats

Avoid fats all together? Again, not necessarily the truth. I spoke via email to registered dietitian and nutritionist Trish Lieberman of the Center for Hope and Health in Philadelphia, Pennsylvania who told me dietary fats can and should be part of a healthy diet. "In fact, most of us need more dietary fats each day than protein (emphasis on the unsaturated fats)." Lieberman says. "Fats provide omega-3's, which cannot be made in the body so we have to consume them through food in order to get the benefit of lowering inflammation in the body." Lieberman also notes that fats are essential to regulate body temperature, produce hormones, and absorb vitamins A, D, E and K.

So, how much should you be consuming? According to the Institute of Medicine, each day adults should aim to consume between 20 to 35 percent of their calories from fat.

Not sure about you, but I’ve always been under the assumption that eating eggs will increase my cholesterol level. As it happens, this is another myth. According to Cooking Light, the kind of cholesterol found in eggs (dietary cholesterol) doesn’t have much to do with the amount of cholesterol in our blood. The outlet spoke to Don Layman, PhD, professor emeritus in the Department of Food Science and Human Nutrition at the University of Illinois at Urbana-Champaign, who said, “The research with eggs has never shown any link of egg consumption with blood lipids or with risk of heart disease.” So, feel free to bulk up on those eggs.

Speaking of eggs, though, are brown eggs really healthier than white eggs? According to her article on Castle.com, RD Gloria Tsang wrote the simple answer to this question is no. Tsang said, “Contrary to a widely believed nutrition myth, eggshell color has nothing to do with the quality, flavor, nutritive value, cooking characteristics, or shell thickness of an egg.”

Active.com spoke to Kerry Neville, RD and spokesperson for the American Dietetic Association (ADA), on the notion of bread color playing a role in how nutritious it is. What she divulged is that the color of the bread doesn’t necessarily provide a clear reading on how nutritious it is — you have to look at the label. Neville suggested looking at the nutrition facts panel to see what you’re getting. Sometimes, the bread might simply by white bread that was dyed with coloring, rather than a whole wheat bread or a whole grain brain as it might appear.

7. Fruits Are Your BFF

Eating fruits every day? That’s healthy. Eating your weight in fruits every day? Not so much. As we've all heard many times before, the key to any healthy and nutritious diet is balance. Fitness spoke to RD Bonnie Taub-Dix who said, “Fruit is high in vitamins and fiber. But it still contains calories and sugar.” For that reason, Taub-Dix suggested shooting for four servings a day of fruits.

If you’ve ever heard eating late at night is detrimental to your body, you’ve heard yet another of the big nutrition myths that tend to circulate. The reality is that the calories you’re consuming are the same no matter what time of the day you’re eating them — as are the nutrients in the foods and how the calories are stored. RD Jill Weisenberger wrote in her Active.com article, “There is no magic hour in which your body decides that incoming calories must be stored as fat.” Ultimately, Weisenberger said it’s about what you eat and how much.

9. You Should Eat For Two When You’re Pregnant

You’re sitting down at a backyard BBQ and a lovely pregnant woman sits down next to you with a plate filled to the brim with food. You smile and nod when she says, “Oh honey, I’m eating for two.”

The idea that you should eat twice as much when you’re pregnant is false (though how fun would that be if it were true?). According to Tsang, it’s usually the recommendation that someone who is pregnant consume about an extra 100 calories a day in the first trimester, and an extra 300 calories a day in the second and third trimesters. When you think about, that’s really a very little difference in the amount you should be eating. Of course, however, every woman is different — so with that in mind, if you're pregnant it's important to listen to your body and hunger cues.

10. Eat Your Proteins & Muscle Will Appear

The last of the myths I tend to hear a lot is that if you eat protein, the muscles will build, build, build in your body. According to Lanford, eating protein alone will not have this effect — you need to be exercising if you want to build muscle. Lanford suggested regular exercise and a balanced diet if you’re looking to increase your muscle mass.

Hopefully this article served to dismiss some of the inaccurate notions you may have had about nutrition. Next time someone tries to spread any of these rumors in you presence, you’ll be able to hit ‘em with the facts.