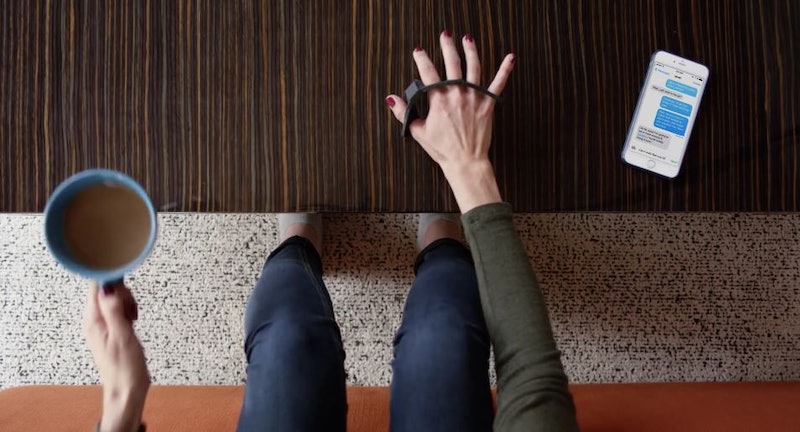 The future is here and it involves invisible keyboards. The wearable gadget Tap Strap turns any surface into a keyboard. Sure, it seems like something out of science fiction, but unlike a sci-fi film, it doesn't involve a hologram — just a strap that fits around your fingers. And as long as you're already pretty familiar with the layout of letters on a keyboard — aka, you've grown up in the computer age — you can use it anywhere, with just one hand.

Tap Strap, which is scheduled to hit stores by the end of the year, works by detecting the motion of your fingers as you "type" on a surface. The surface itself doesn't matter. It can be a tabletop, a bench, your own leg; the device detects, based on your finger movements what keys you would be hitting, were you using a keyboard, and inputs those letters via Bluetooth.

Obviously, this sort of thing comes with a learning curve — after all, most people don't touch-type one-handed, so it might take some time before it feel natural. But Tap Strap will come with a training app to help you get into things. And it could potentially be the key to making new forms of technology appealing.

For instance, one of the biggest downsides to Google Glass is that there isn't an easy way to type; the same goes for a lot of smartwatches on the market. This makes a number of gadgets somewhat unappealing, given that typing is a pretty crucial part of interacting with a computer. But with a convenient, Bluetooth-enabled, typing option, things might change. And even if those specific devices still never catch on, this sort of thing could be key to making small and smaller computerized devices user-friendly.

Plus, being able to type without a keyboard? Tell me aren't living in the future.

You can sign up for the Tap Strap waitlist here.