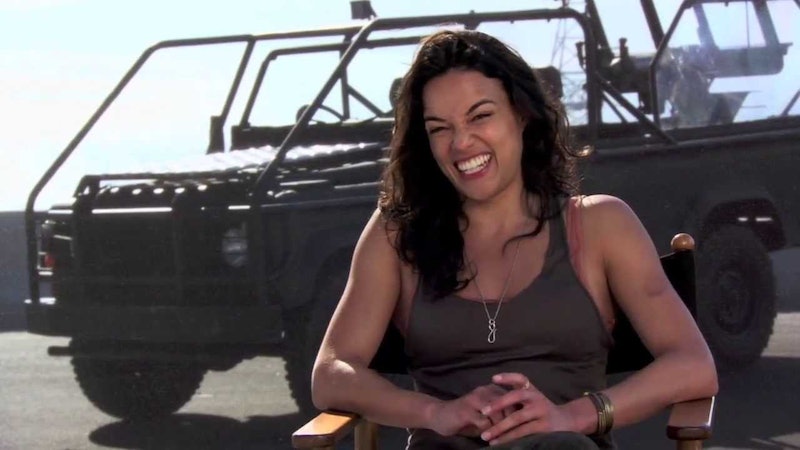 When it comes to women on screen who can hold their own when things get tough, Michelle Rodriguez' Fast and Furious character, Letty Ortiz, pretty much tops the list. Letty Ortiz is a mechanic and a racer and she's not afraid of danger: she even went undercover for the FBI. So it's surprising to learn that Ortiz wasn't always intended to be such an inspiring figure for women onscreen.

In an interview with Entertainment Weekly to commemorate the fifteenth anniversary of the first film in the franchise (which is in June) Rodriguez revealed that initially, Ortiz had been somewhat of a cliché. Rodriguez stated, "She was a character that needed a lot of work. And, you know, I get it. It’s a male-dominated industry, action films. I kind of understood when they didn’t understand what a strong independent woman would be like."

Rodriguez's assertiveness and experience in a whole range of different environments, having resided everywhere from Puerto Rico to the Dominican Republic to New Jersey, meant she was able to craft Letty Ortiz into a much more believable woman than the screenwriters had already intended. In her interview, she observes that all the screenwriters on the film were male and as such, their portrayal of a streetwise woman wasn't always as realistic as it needed to be.

Originally, it was kind of like a mock-up of Point Break. And it doesn’t really make any sense to try to have that character, that tries to sleep with the cop and her boyfriend, when you’re dealing in ghetto terms. Because people in the streets don’t maneuver that way. When you’re with the alpha male in the pack, you stick to that. You’re loyal to that, because that’s your survival. You don’t go with the pretty boy, because he could get beaten up very easily by the dominant alpha. So I had to kind of explain, and school these cats in Hollywood in how it works in the street.

While Rodriguez never uses the "f" word in the interview, I daresay hers sounded like a pretty feminist standpoint. She stated about the Letty-Brian romantic arc that Rodriguez implies was initially there in the movie: "They just think girls are there to complement men. You have to teach them there’s other purposes for women."

Luckily for Rodriguez, teaching the male screenwriters how to write a realistic and nuanced female character was something that "became easier and easier throughout the years," as the screenwriters realized "it wasn’t from an egotistic place."

One of the most interesting aspects of the interview is how much Rodriguez argues that being a complete unknown gave her more, not less influence over the cast and crew. She believed she would have thrown the towel in if the character had continued to be offensive because "it’s easy for somebody who comes from nothing to do that. It’s not like I’m gonna lose a lot by standing my ground and sticking for what I believe in."

And Letty Ortiz is just that: The most unlikely of characters. The action movie chick whose characterization shows depth and consideration — her partner's equal. The Fast and the Furious films are full of hot girls in bikinis cooing round cars and Letty Ortiz could have been just another one of them. All hail Michelle Rodriguez for having the guts to ensure that Ortiz became the badass woman we all know and love.