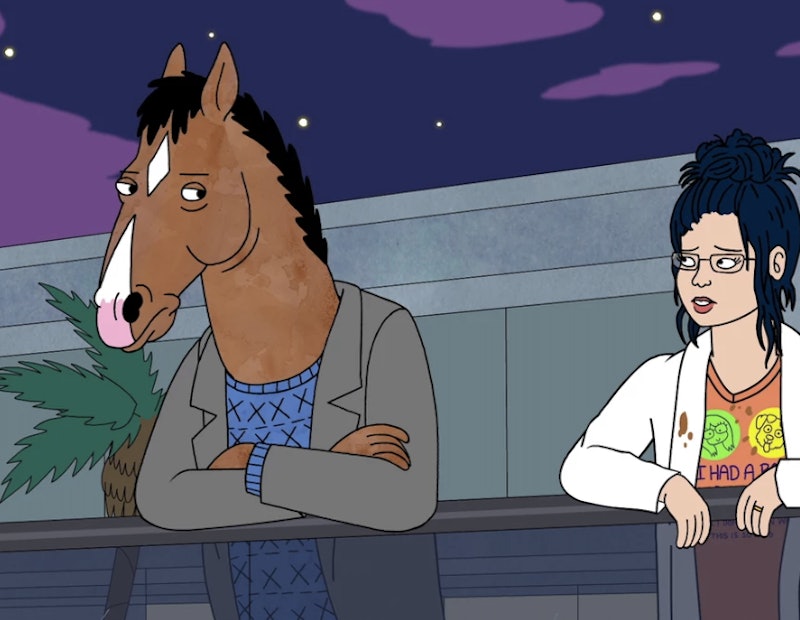 I don't know about you, but I never thought that I would ever view a middle age existential crisis through the lens of an animated horse, let alone deeply enjoy the experience. BoJack Horseman is a dark comedy that shouldn't work at all, and yet somehow works brilliantly. The Netflix series is both a hilarious spoof on the Hollywood machine and a dark story of what happens to a former star's psyche when the limelight dims. The Netflix original already has two seasons streaming on Netflix, and, fortunately for those who can't get enough of BoJack's bleak worldview, it's adding a third for your binge-watching pleasure. The BoJack Horseman Season 3 premiere date is July 22, and it's about time that you catch up with this pretty perfect show.

BoJack lives in a world in which animals and people coexist in "Hollywoo" (the last letter was dropped from Hollywood after BoJack stole the D from the Hollywood sign). BoJack himself is the former star of '90s sitcom Horsin' Around, which garnered him Dave Coulier-level fame but a Hank Moody affect. When we first met BoJack back in Season 1, his life consisted of bedding women who recognized him from his TV show, drinking excessively, and falling victim to his crippling self-loathing. Then, a memoirist named Diane walks into his life, and makes him reevaluate pretty much everything. BoJack starts putting effort into a comeback, hoping that raising his star power might also raise his confidence.

When we last checked in on BoJack, the horse was going through a major life crisis. After spending the season working on his dream role — playing fallen racer Secretariat in a biopic — BoJack realized that just about nothing in his life truly made him happy. Though he seemingly moves through his intimacy issues in order to tell his owl girlfriend Wanda that he loves her, his inability to find happiness ultimately causes BoJack to push her away.

However, it's not all bad news in BoJack's universe. It seems that BoJack might be making one more attempt to change his selfish ways. The Season 2 finale, titled "Out To Sea," ended with BoJack finally doing something to benefit others: opening up an orphanage in memory of his late friend Herb Kazzaz. (Sure, the plaque may read "Jerb Kazzaz," but really, it's the thought that counts.) Could BoJack find happiness in the form of helping others? Er, probably not for very long, given that we have an entire season of hilarious BoJack soul-searching to get to. But still, for BoJack's sake, let's hope his charity work is baby steps towards his happy ending.

New episodes of BoJack Horseman begin streaming July 22 on Netflix. Check out the preview above.