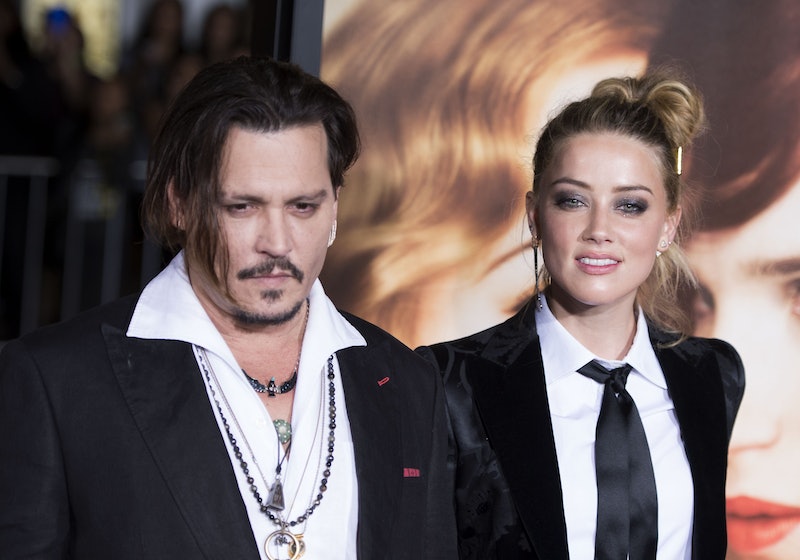 Has another celebrity couple called it quits? According to a new report, it's all over for a pair of onscreen love interests turned real-life husband and wife. Per a report from TMZ, Amber Heard has filed for divorce from Johnny Depp, reportedly ending their marriage just over a year after the two walked down the aisle. According to the report, Heard filed her divorce petition on Monday, and cited "irreconcilable difference" as the reason for instigating the official breakup. Sadly, the report comes just days after TMZ states Depp's beloved mother passed away, making this news all the more heartbreaking. If the TMZ report is true — Bustle reached out to Heard and Depp's reps but have not heard back at this time — then the question of whether Heard and Depp have a prenup will make all the difference to their allegedly pending divorce.

A prenup (or pre-nuptial agreement) is a way to decide how your assets would be split up in the event of a divorce, and it's fairly common amongst people who have major assets, like celebrities or other people of considerable wealth. It's also common when there is a significant difference in how much money each person has. Depp has been in the industry longer than Heard has, and at 52, makes about $30 million per film, reports Forbes — and according to TheRichest, has a reported net worth of about $400 million. BoomsBeat reported in 2014 that the 30-year-old Heard has a reported net worth of $4.5 million, which, while not chump change, is considerably less than the reported amount of her soon-to-be ex-husband's. So did Depp get a prenup to protect his assets?

According to TMZ, Depp did not. According to the site, the couple reportedly had no prenup, which means that there is no way to know who will get what assets should Heard and Depp go through with their divorce. Hopefully, the former couple will be able to keep their divorce amicable, even if they do not have an established document stating how to divide their assets.