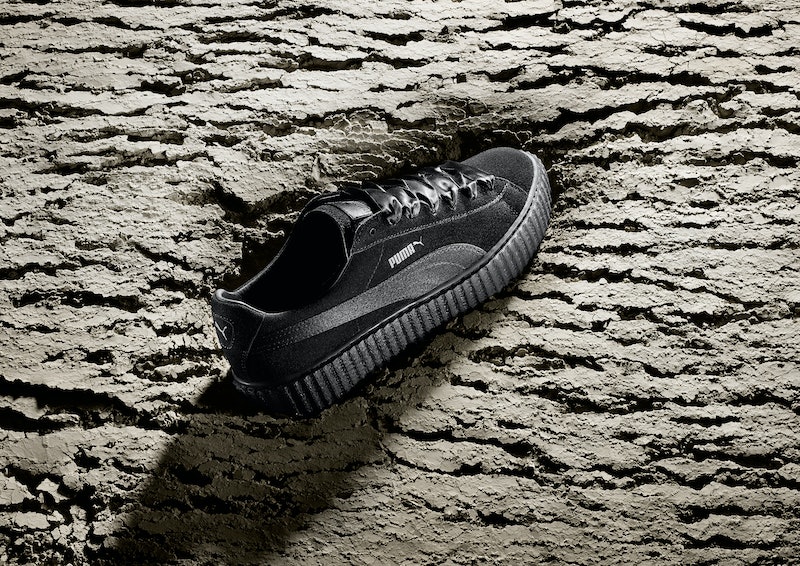 It's Creeper time. Rihanna dropped a new generation of Puma Creepers — her third— which includes an all-white leather pair, an all-black suede pair, and a maroon and green pair with the oatmeal gumsole. The $140 shoes went on sale at 10 a.m. ET on Thursday, May 26, and were made available at the Puma site, at select Puma stores, and were slated to be available via Nordstrom and Bloomingdales as well, per Puma PR. Given all the advance hype and mania, are the new Rihanna x Puma Creepers sold out?

Sadly, the kicks, which are easily the sneaker of summer 2016, are sold out. It took about 30 minutes for them to fly off the virtual shelves at the Puma site. Anticipation was high and both the Rihanna Navy and sneaker pimps responded by shopping their faces off.

Now that you are legit inconsolable due to the fact that these cool AF shoes have sold out, your next logical question has to revolve around restocks, right? Will Puma be restocking the Rihanna Creepers? Will supply meet demand? Or will fans be forced to seek out the shoes on third party sites?

Here's the scoop on these insanely coveted kicks.

Puma PR reps told Bustle in an email that the shoe is "a limited release, like other Creeper drops before it." The reps also told us that "restocks are not planned. Should it happen, press and consumers will be informed."

While Women's Wear Daily reported that monthly Rihanna x Puma restocks were in the works, the reps told us, "More to come, stay tuned!"

Also, before today's 10 a.m. drop, Nordstrom tweeted that they would now be carrying the shoes on Tuesday, May 31. Obviously, there was some sort of change to the schedule, which is good news for fans who couldn't snag a pair on the Puma website on Thursday.

If Nordstrom is getting the shoes next week, you better get a plan of action in place!

Gah! But all of this hype is so understandable. Everyone wants a pair and making them incredibly difficult to get only increases the desire for them. You always want what you can't have, whether it's love or fashion.

If you managed to scoop up a pair of these sneakers, congrats! If not, well, you might have to wait for a fourth generation drop featuring new colorways, since the status of these pairs is "limited edition." Unless, of course, the powers-that-be at Puma change their minds and decide they want to make a lot of customer and athleisure fans happy.

You can also shop third party sites, but be prepared to do your research, to verify the authenticity of the shoes. Be prepared to pay higher than the MSRP, as well.

Oh, btw, I scooped up two black pairs. Yaas! I will let you know if they were worth it — cue the Fifth Harmony song— once they arrive and I rock 'em with a few outfits.