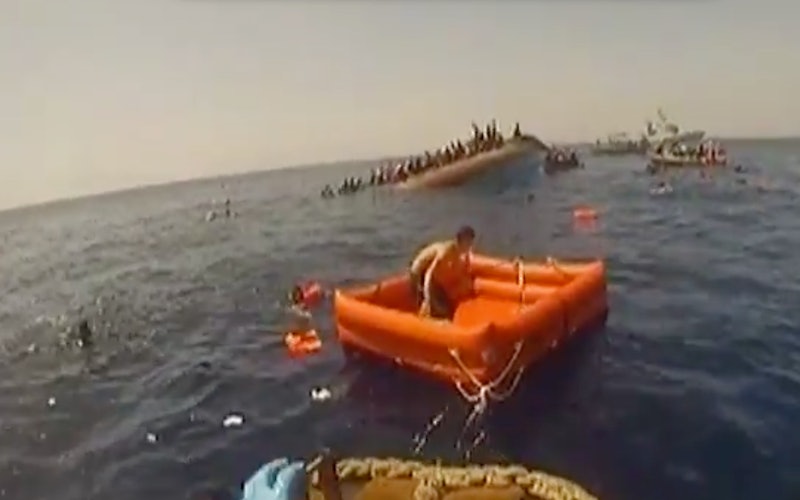 Migrants continue to attempt the dangerous journey to Europe across the Mediterranean Sea. An accord between the EU and Turkey was meant to limit arrivals, but it may just force them to make an even more dangerous trip from Libya as a new video captured Wednesday shows. The dramatic rescue of some 562 migrants by the Italian navy shows how harrowing the journey is.

The fishing boat, carrying 590 people, sent a distress call when it was 18 miles off the Libyan coast. An Italian patrol vessel, the Bettica, responded. As it approached, the fishing boat capsized "due to overcrowding and instability caused by the high number of people on board,” the Italian navy said. Images the sailors took show how the migrants plunged into the water as the boat began to roll due to people on board crowding to one side as the rescue boat drew closer.

Sailors threw in life preservers as a helicopter overhead — dispatched from another nearby boat — dropped inflatable life rafts. Only five people are known to have drowned but another 23 passengers were still unaccounted for. The search continued — although the Bettica moved on to rescue another 108 people later in the day.

Even considering the remarkable nature of the video and images, the most impressive part of Wednesday's rescue was the sheer number who were saved. Flavio di Giacomo, a spokesman for the International Organisation for Migration called it "a miracle." Oftentimes the passengers under deck cannot swim and sink with the boat. "You would expect them to save the people on the deck. But if they’ve saved 500 people, that means they’ve saved even the people who were inside. And that is very impressive."

This week more than 6,000 people — most of them sub-Saharan Africans — have attempted the journey from, many venturing out in rubber dinghies that begin to take on water as soon as they leave land. That's more than 15 percent of the total who have tried to cross this year from North Africa. Weather is finally improving as summer draws closer. After increasing in January and March, the number who have died this year compared with last while crossing is down in April and May.

The number of refugees headed to Europe via Greece, taking boats or even dingies from Turkey have decreased significantly. The accord between the EU and Turkey includes a stipulation that returns anyone who attempts the journey directly to Turkey. So far those fleeing Syria and Afghanistan have not attempted to cross from Libya, which is seen as more dangerous now than it was in 2014, the last time a large number of Syrians attempted the crossing.

Any migrants who are saved crossing from Libya (or Egypt, an increasingly popular departure point) are taken to Italy and then told to leave within seven days. Should the migrants try to continue North, they will face increasingly hostile rules. Austria changed its laws so that you can no longer ask for asylum at its border.

The United States seems to finally be hastening its approvals of Syrian refugee claims this week. President Obama promised that 10,000 Syrians would be resettled in the United States this year. On Monday, 225 refugees were approved, the largest number in a single day since the outset of the Syrian war.