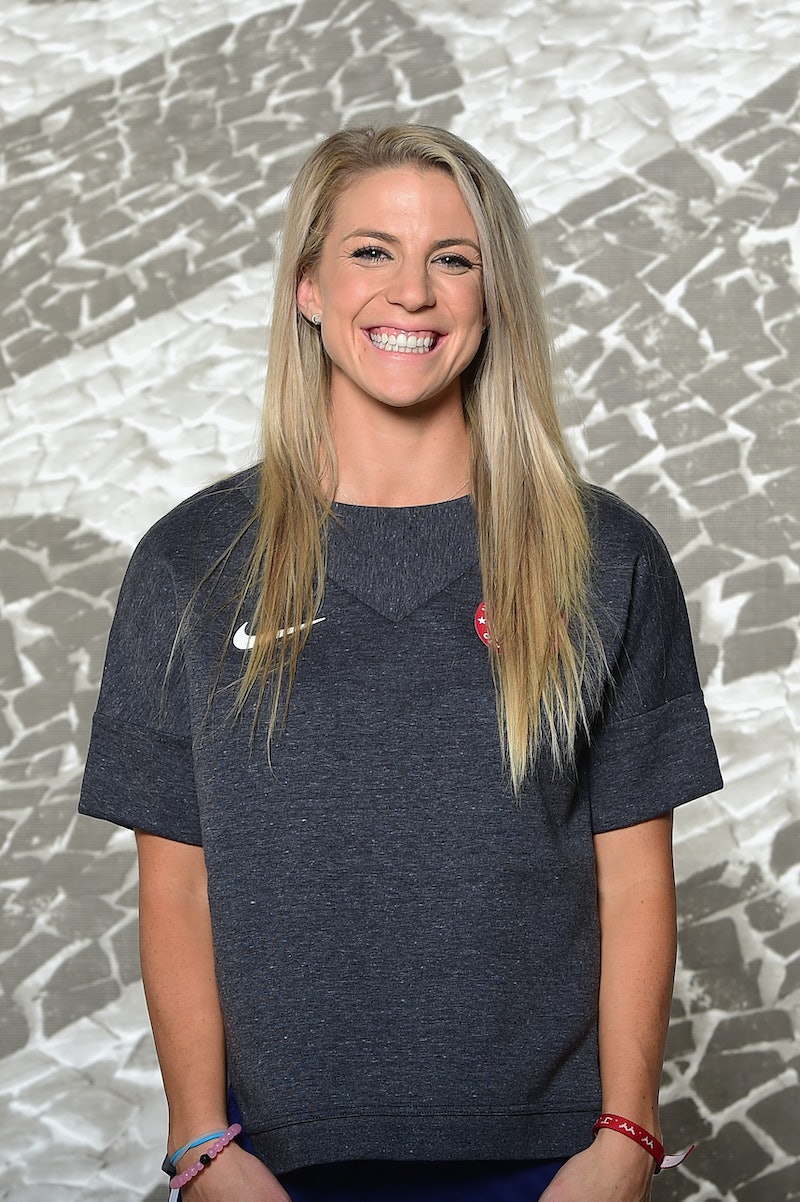 Julie Johnston is on a mission. Specifically, the 24-year-old U.S. women's soccer star is motivated to be the best defender she can be. "I want to continue to push limits that maybe people think weren’t possible for me," she tells Bustle in an interview. Johnston was born and raised in Mesa, Arizona, where she grew up playing soccer with the support of her parents. She explains to Bustle that what helped her get to where she is now in her career was "pushing boundaries that people didn't think were possible," and that's an important message for all young women to hear — no matter what field they're striving to succeed in (or on).

When Johnston was just 9 years old, she knew what she wanted to do for the rest of her life: play soccer. She tells Bustle that even from a young age, she would train on her own but wanted to do more, prompting her to find a club soccer team that would help her "grow and develop as a player." Johnston adds, "Around eight or nine, people would always say 'What do you want to be when you grow up?' And I’d be like, 'I want to be a professional soccer player.' And I would say around then is probably when I sort of, like, chose soccer and wanted to do it for a really long time."

Johnston has immense respect for the women who paved the way before her, naming Brandi Chastain, Mia Hamm, and Julie Foudy as soccer role models who proved to her that her dream could be a possibility. "I just remember seeing them at the Olympics, or they played in my hometown and I remember going to their game... And it was just being able to see that it was possible and that they made that possible for us," she says.

For Johnston, following her passion for soccer was never a hard choice. "It really just started for the love of the game. It was so fun for me that I wanted to continue for it, so it wasn’t like someone had to necessarily push me. I wanted to get better, and I just loved playing," Johnston says of her motivation to play the sport. Since her start as a child, Johnston played for the best club in her state, and then went on to play soccer for the Santa Clara University Broncos. Now, she is making a name for herself as a U.S. soccer star. In 2014, Johnston was drafted in the first round to play NWSL (National Women's Soccer League) for the Chicago Red Stars, for whom she currently plays. That same year, she was named as the NWSL Rookie of the Year.

Johnston has made a name for herself so far in her career, but she also thinks it's important to "share your scars."

"I think it’s important ... in the sense that, whatever you’ve been through, it’s, like, help others and make it better for them to be able to see the possibilities, to dream big. The things that can come out of just pushing yourself... It’s so amazing, all the things you can do if you just put your mind to it."

It's her perseverance that led Johnston to play in the 2015 World Cup, after initially being left off the qualifying roster. She was called in at the last minute to play as an alternate for an injured player, and ultimately ended up playing every minute of the tournament. The U.S. women's team won the World Cup in 2015 with Johnston playing defense — the team's first win since 1999. Johnston was later named to the FIFA WWC All-Star Team. "I think we’re pushing the limits and boundaries that maybe, you know, people didn’t think female sports could get to," she says.

Johnston's advice for young women trying to make it as an athlete? "I think the biggest thing that I would tell young athletes is that adversity can really be your best friend. And I say that because you go through hard times, especially as an athlete ... whether it’s an injury or a hard time, or trying to make a roster, whatever it is. It’s those times that are really, really hard that you learn a lot about yourself. It really pushes you to find your fight, find your strength, as an individual. And although there’s hard times, those are the times that make you who you are and help you get to where you want to be."

Looking ahead to the 2016 Olympic Games coming up in Rio de Janeiro, Brazil, Johnston is hopeful. She is currently sponsored by Team Kellogg's, along with four other Olympic hopefuls. "My dream is to make the roster and be able to go there, to Rio," she says. I think everyone’s ultimate goal there is to be able to stand on the podium. But as of right now, you just try to focus and train as hard as you can to be able to make that team and to represent USA in the Olympics."

Johnston explains that what she loves most about playing for a U.S. national team — rather than when representing a specific state or city — is that people from all states can come together in support of the team. "They love our story, they love the fight of our team," she says. "And we definitely take pride in that."

To learn more about all Olympic hopefuls, visit TeamUSA's website. The Olympics begin on Aug. 5.