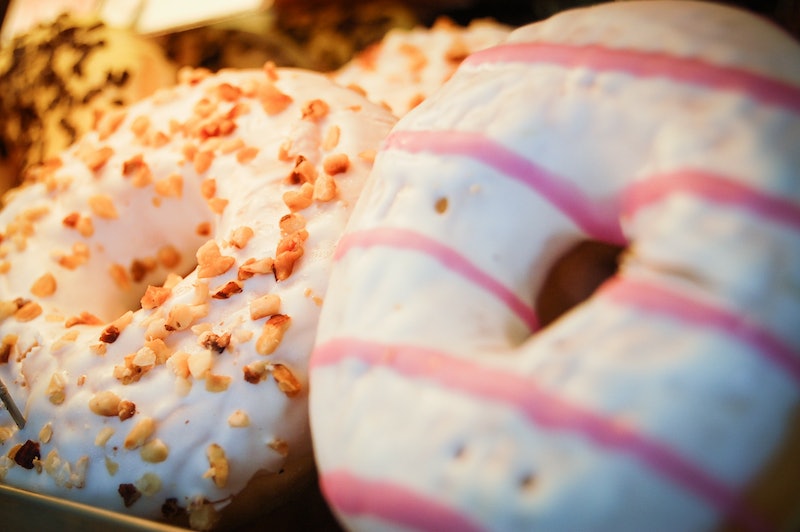 Everyone experiences anxiety at some point. Whether you're someone who gets it often, or you just experience it from time to time, we are usually quick to blame the uneasy feeling on something going on in our lives. However, there a number of surprising reasons you might feel anxious, and these have more to do with our habits and daily routines more so than an external factor. Knowing these triggers is important, as we can then take the proper steps to eliminate these unnecessary sources of anxiety.

"Feelings of anxiety can play a major role in how we feel about ourselves, our lives, as well as influence the choices we make through the day," says psychologist Robi Ludwig to Bustle over email. "Anxiety can get us to avoid certain situation or scenarios because they don't feel safe to us. When anxiety triggers our 'flight or fight' reaction, it can even produce physical symptoms which can mimic sensations like you're having a heart attack, etc."

Although it's impossible to completely eradicate all anxiety, if we can pinpoint some of the sources of our uneasiness, it can help us ease some of the discomfort of our daily lives. If you find your mind is racing more often than you would like — and you're not quite sure why — you might want to consider these nine surprising sources of anxiety.

1. You Drank Too Much Coffee

Plenty of us start our mornings with a daily cup of joe, but the drink might be giving us more than just an energy boost. Sadly, an unfortunate side effect of caffeine is exacerbated anxiety, and one study from the British Journal Of Psychiatry found that excess caffeine consumption can produce effects indistinguishable from anxiety disorder. If you need a morning boost, try having some tea instead, which has a more mild effect and won't leave your heart racing.

2. You Were Tossing & Turning All Night

We all know a poor night's sleep makes us tired, but it can also mess with our emotions. Lack of sleep fires up the brain's amygdala and insular cortex, the regions responsible for emotional processing, according to research from UC Berkeley. This results in brain patterns that mimic the abnormal neural activity seen in anxiety disorders.

Sure, those cookies with colored sprinkles and those donuts with pink frosting look delicious, but they might be toying with your emotional wellbeing. Foods additives such as artificial dyes and sugar substitutes like aspartame have been found to cause mood disturbances in people who consume them, according to WebMD, so try to stick to whole foods to avoid these issues.

4. You're Allergic To Gluten

When most people think of allergies, they envision uncomfortable stomach aches or maybe even hives, but allergies can also cause anxiety as well, which can leave them unnoticed. If you have a gluten intolerance, it can cause symptoms like anxiety and depression, according to Psychology Today, so if you eat a lot of wheat products, you might want to consider cutting down to see how you feel.

If you're not drinking enough water, it will do more than make you just thirsty. A study from the Journal of Nutrition found that even mild dehydration can cause disturbances in mood, along with fatigue and problems focusing. Make sure to drink water throughout the day to avoid dehydrated-related anxiety.

6. You Took Over The Counter Medication

Popping a pill for a headache might seem like a good idea to alleviate the pain, but it could come with some unwanted side effects. Many over the counter medications contain caffeine, especially those for headaches, which could be making you anxious. Check the ingredients of the pill box before you take it, and opt for varieties that don't contain the stimulant.

7. You're Spending Too Long On Social Media

Spending a lot of time on Facebook and Instagram lately? You might want to unplug. A study from the non-profit Anxiety UK found that social media is a source of anxiety for a majority of people. People get stressed when social media isn't available, they have difficulties sleeping after browsing social media, and it even causes difficulties in relationships.

A physical hangover is hard enough, but alcohol can also wreak havoc on your mindset. "What you might not realize is the effects of alcohol might be fueling your anxiety levels the next day," says Denise Limongello, LMSW over email. "Many drinkers report feelings of shame and embarrassment after a night of heavy drinking." Alcohol exposure rewires the brain and increases our susceptibly to anxiety disorders, according to a study from the University of North Carolina School of Medicine.

"Many productive individuals report that having a 'to-do' list as helpful with tackling daily responsibilities," says Limongello. "If you do not have a system in place for daily tasks and constantly find yourself behind at work, for instance, this can lead to increased anxiety in your daily routine. Setting up a system for meeting your duties at work and home can be a great way to make your life easier and more productive and also keep your mood more stable in the process."

Everyone's body reacts differently, so it's important to pay attention to what specifically affects you. If your anxiety is too much to handle, it's always good to see your doctor to find a remedy specifically tailored for you.