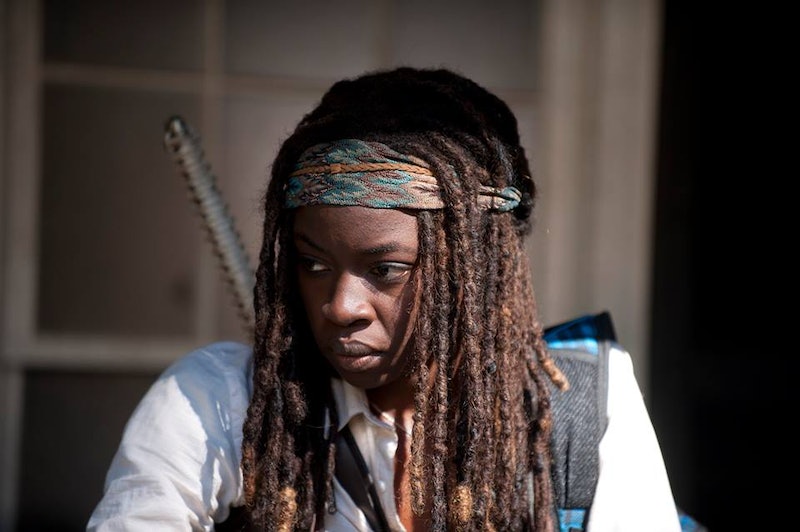 This week’s episode of The Walking Dead brought us Sergeant Abraham Ford, Rick’s homicidal friends, and #crazycheese. But, like last week's episode, "Claimed" continued to follow the various bands that have broken off from the prison group. At this point, there are pretty much too many separate stories to cover — so this episode left a few of the crews behind to focus on Glenn and Rick’s groups. When will some of these groups finally meet up? Everyone thinks everyone else is dead, which is troubling, but also entirely too frustrating since we know they are all so close to one another.A new, cheery side of Michonne has been introduced this half of the season. We’ve learned that she had a family, including a three-year-old boy (Andre Anthony), before the whole apocalypse thing happened. She has opened up to Carl, and even made him laugh while chatting over breakfast. While out looking for supplies, Michonne gave Carl insight into her past life, which made Carl feel more connected to her. Carl even told to her that he hoped that Andre and Judith were in a better place together. On a happier note, Michonne was able to find “Crazy Cheese” while they were out and social media was pretty excited about that. Even though this new Michonne has lightened up the mood of the show, aren’t we all kind of missing the stoic and hard Michonne of the past?

Perhaps the most comical, yet suspenseful, interaction of the episode was between Rick and the crew of murderous dudes that invaded the house he was squatting in. After Michonne and Carl went out to get supplies, Rick was left alone in the house to recooperate from his injuries. To his surprise, he woke up from a nap to voices of men beating each other up in the house. Rick didn’t want to mess with the seemingly violent men, so he quick headed upstairs where he hid under a bed. After hanging out under the bed for what seemed like most of the episode, he finally made it out of the house unharmed and caught up with Michonne and Carl. The groups ended up at the railroad tracks where they found a sign for “sanctuary,” which could be found by following the yellow brick road, err, railroad tracks. We can only hope they make it — isn’t that where Tyreese’s group is heading, too?In the episode, we also get to know Sgt. Abraham Ford and his crew, Eugene and Rosita. Glenn (who was passed out) and Tara end up on their truck, until Glenn woke up and realized he was more than three hours away from where Maggie might be. Tara knew Glenn would be concerned and was nice enough to write down directions on her hand. Was it just me, or did anyone else think this was actually a really sweet gesture? Tara, you might just be okay in my book. So, even though we can’t be sure about the sanity of Lincoln’s crew, they seem to have a plan, or something. Eugene is a “scientist,” with a very fashionable haircut, who “knows” exactly what is happening/how to cure it. They are on a “time sensitive” mission to get to Washington DC to save the human race… Sounds vaguely familiar. Wasn’t that what Dr. Jenner was trying to do at the CDC back in Season 1? And doesn't it sound similar to Milton’s “research” on the disease at Woodbury? Regardless, their plan to get to Washington was short-lived, as Eugene shot at and “killed” their military truck while trying to take out walkers. The group put their plans to save the world on hold and stick with Glenn on his mission to find Maggie. Save the world? Find Maggie? We’ll stay with you for now, Glenn. (Especially since we know Maggie is out there looking for you, too!)