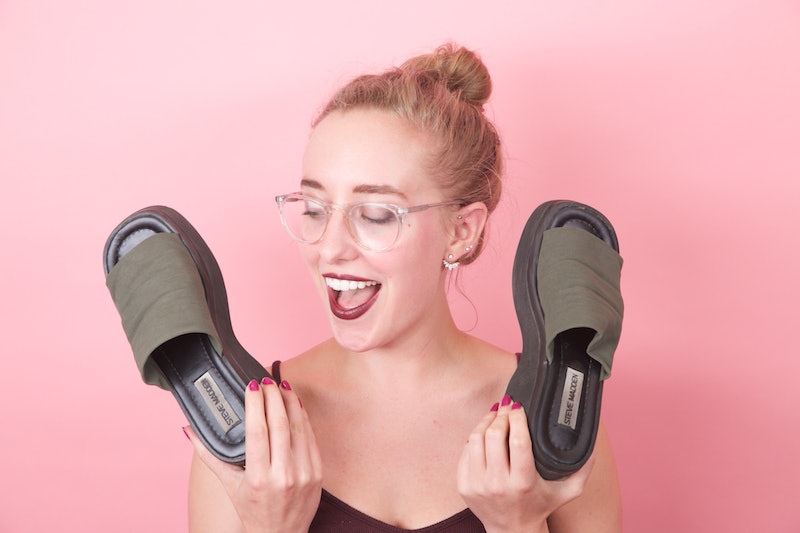 Among all the fabulous fashion and beauty trends we were blessed with in the '90s, nothing seems to trigger more universally positive nostalgia with millennials than those glorious stretchy Steve Madden sandals. It's not so surprising, really. Steve Madden was the cool shoe brand of the era. I was only ever allowed the cheap knockoff versions, and even though they looked essentially the same as the real deal, I envied the girls who got to show off the Steve Madden logo every time their flips flopped. It felt like everyone had a pair, probably because they were generally much more acceptable to parents and dress codes alike than a pair of lace-up, over-the-knee, silver high-heeled boots (another of SM's popular silhouettes).

In the early 2000s, platform shoes were generally replaced by delicate flats, and we all collectively gave away our beloved slides. But now we're a couple years into the a resurgence of chunky, "ugly" silhouettes, so I decided it was time to try to bring 'em back.

After a couple months of periodically checking Etsy and eBay, I finally found a pair of "US Size 7, 90s Steve Madden Platform Sandals, Slip On Wedge Sandals, 90s Minimalist, 90s Chunky Sandals, Army Green, Vintage 90s Sandals." While I was personally always partial to the all-black versions, I figured this olive-green variation would do.

Here's what happened when I rocked a pair of everyone's favorite '90s sandals for a week in the summer of 2016.

These were delivered on a day when I was wearing new shoes that were tearing up my feet. I welcomed the soft, stretchy fabric with open arms — and they were just as comfortable as I remembered. I felt a sense of '90s calm wash over me as the familiar "fwap fwap fwap" of the 900-pound sole echoed through the office while I strutted around showing off my old new kicks. I didn't care that they totally clashed with my pink shorts; this week was going to be incredible.

My extreme enthusiasm for the experiment waned a bit when I got home that night after walking to meetings and the grocery store. I remembered why I don't wear flip-flops (especially of the platform variety) as I started to feel the dull pain of shin splints bubbling up. I asked my boyfriend what he thought of my new statement look for the next week, and he responded, "You're ruining my life."

But it was only day one! I wouldn't let a little shin pain or less-than-enthusiastic peer review get me down! Besides, I was excited to dress in full-on '90s garb for the rest of the week.

Well, I was right about those shin splints. But the dull aching wasn't nearly enough to make me give up on the experiment. I didn't get any of the the high fives (or weird looks) I thought I might on the subway, but at around 11 a.m. a coworker gasped, "Are those the Steve Madden slides?!" A couple hours later, another co-worker sighed and made me walk by again when she heard that nostalgic flip-flop noise (which you can hear for yourself in the clip below) so unique to this particular style. I had a hunch that the news of my experiment was spreading, but I still enjoyed all the reactions.

I made yet another co-worker take some photos of me, and I have to say, I think I look pretty freaking cool in these shoes. The only downside (well, besides the shin splints) is that these sandals make my feet shockingly hot and sweaty. The shoes themselves had already gotten super smelly by the end of day two.

That night, I went to a party where exactly zero people noticed my vintage shoes. A group of us left around 9 p.m. to get impromptu ear piercings, which made the illusion of being back in high school even stronger.

By day three, my weak ankles were really starting to hurt. Like, to the point where I almost thought I'd have to abandon the experiment rather than risk permanent injury. It was also super hot out, so my feet were a little swollen, which made the elastic a little too snug to actually fit over my feet. Under normal circumstances, I probably would have swapped them for my wide-fitting Birkenstocks. But since fashion is pain (or so I hear), I soldiered on.

I met up with some friends in the park, which involved a roughly 20-minute walk to get there. Along the way, my boyfriend decided that he liked the slides after all, and the elastic stretched to accommodate my temporarily wider feet. They held up surprisingly well to a day of lawn games, though the smell doesn't seem to be going anywhere.

Halfway through the experiment, I was so over these shoes. They clashed wretchedly with the outfit I really wanted to wear on day four. My ankles hurt a bunch, and my feet were basically begging for the sneakers I usually wear. I was cranky — until I went to a party that night.

A friend commented on my sandals, asking where to get a pair because she had wanted to find "shoes like, that are fancy enough for work." This was truly a turning point for me. I realized that since I had at least four more days of wearing these bad boys, I might as well embrace how cool they looked. I resolved to be more positive about the shoes for day five.

I didn't exactly succeed in getting excited about the slides, but I definitely felt indifferent — a step up from totally bummed about having to wear them again. I slipped the sandals on without thinking about it, and despite spending another day running around in the park, I didn't notice any joint pain. Maybe my ankles were getting used to the weight of the platform?

Day six had me back to work after a long weekend, where the slides were welcomed by my coworkers with open arms. I had to take photos for a feature in another publication (check out Zieley Mag's September issue for more pictures of my face!), and I was actually pretty pleased to feature the Steve Maddens that had become such a huge part of my existence. Still, I was really looking forward to wearing outfits that weren't built around a pair of olive-green clunkers.

On the second-to-last day of my experiment, I actually got a mandatory break from my Steve Maddens. A meeting at the New York Stock Exchange meant changing into nice heels for a couple hours — and I hated it. After a week of complaining about how much the stretchy slides were ruining my joints, I realized they were nothing compared to a pair of heels. I literally changed back into the slides while I was still in the building. Even though it was technically cheating on the experiment, this break from the sandals made me realize how much I had actually grown to love the little guys.

I'm not sure if I just had more meetings than usual on the final day, but it seemed appropriate that I got the most comments on my Steve Maddens as the experiment came to an end. I was a mess of mixed emotions. I already had my next week of non-'90s shoes planned out, but I was a little sad to bid the slides adieu. As you can see from this photo, I had fallen hard for these stretchy specimens. Even if they did stink to high heavens.

Will I Wear The Steve Maddens Again?

I have yet to put these slides back on my feet. They're sitting in my closet, separate from the rest of my shoe collection. I want to remember the good times we had together by the end of the week, and am nervous that I'll have to go through the pain of getting my ankles and shins used to the heavy platforms all over again if I decided to wear them on a whim. But looking back at these photos, I'm realizing how sweet they look. I think I'll have to whip them out again soon. And Steve Madden, if you're reading this, can we get these back in stock ASAP?

More like this
Phoebe Dynevor Serves ‘Bridgerton’ Underboob In Stunning Floral Gown
By El Hunt
Sephora’s First IRL Store In The UK Is *Finally* Confirmed
By Justine Knight
Black-Owned Fragrance Brand Ourside Is Changing The Luxury Perfume Industry
By Audrey Noble
25 Cute Ski Outfits That Look Hot & Keep Away The Cold
By Bella Gerard
Get Even More From Bustle — Sign Up For The Newsletter
From hair trends to relationship advice, our daily newsletter has everything you need to sound like a person who’s on TikTok, even if you aren’t.