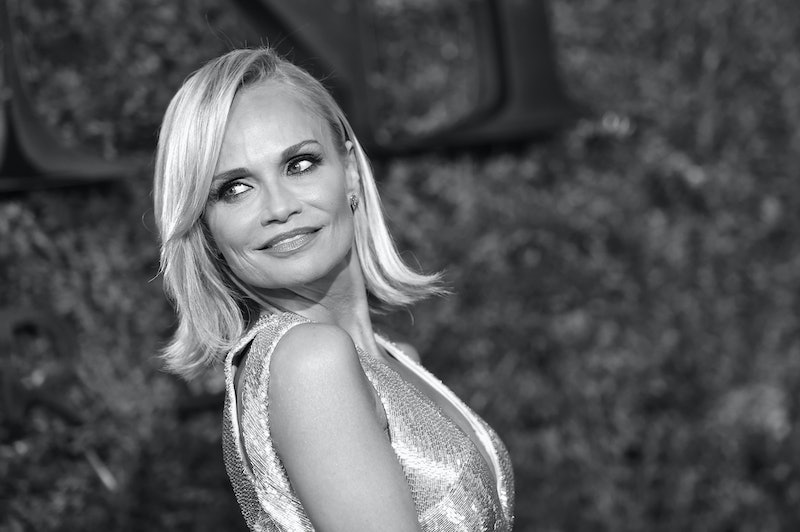 Former Glee cast member and Broadway star Kristin Chenoweth explores new territory by playing a mother who’s also an addict in the new film Hard Sell. Unfortunately, addiction is nothing new to the star. In the film, her unstable character Lorna struggles with substance abuse as well as agoraphobia and other mental issues. The actress recently reflected on putting herself in Lorna’s shoes, telling VH1, “It must be very difficult to feel like you can’t live or you can’t breathe until you get your next high.” But she has real-life experience to pull from, as she reveals why dealing with addicts is, in a way, an addiction of its own.

“What attracted me to this is that I got to play the parent,” the 47-year-old tells Bustle. “Of course this character has a bunch of issues. There’s a lot of times when we don’t really talk about kids getting in a position where they become the parent. Even a parent trying to be a good parent.” She refers to Skyler Gisondo, who plays her son and caretaker, Hardy. “I just wanted to do it. That was a challenge for me,” she says. “I’m really proud of it.”

Chenoweth explains how she pulled real-life inspiration from her relationship with her mom to play a mother, but not when it comes to addiction. She got that experience elsewhere. “My mom doesn’t have those kinds of issues, but we all live with our own crap. We all do,” she says. “I’ve definitely been close with people who had mental health issues, I’ve dated people with addiction. I’ve been close with someone who never wanted to leave their house.”

Although Chenoweth hasn’t endured such struggles, she can very much relate to her character. “This poor woman has not taken care of herself in many, many years and probably hasn’t been diagnosed correctly, not the proper counseling situation and/or medication,” she says. “I was friends with someone who had a mom like this and I always felt like she was sort of trapped.”

When reflecting on these tumultuous times, Chenoweth acknowledges why part of her real-life character draws in people with such issues. “I just remember what it brought out in me, which is the people pleaser. There’s one thing I’m actually working on in my life right now,” she explains. “I’m always gonna be a little bit of that, it’s just in my DNA.”

Although Chenoweth felt some sort of joy for helping loved ones in need, her help took a toll. She admits that she felt trapped at times, especially in past romantic relationships. “It was really my self-entrapment because I had the power to not be,” she says. “That’s something about what we do, people who want to make everything OK. We have a choice and power to not put ourselves in that position. And yet we do it.”

Chenoweth’s involvement with addicts became so extensive at times, she even sought help. “[Self-help] groups, which I’ve attended, really help," she admits. Through the ups and downs of what she had witnessed and endured, she ensures that there was a silver lining. “Eventually you can only go as far as you can and then you’re off to love them and take care of yourself," she says.

Helping others is a beautiful thing, but there's a line to be drawn. Luckily, the actress knows that it's time for her to focus on her own well-being. "Now [it] has become more about taking care of myself a little bit," she says.

As it should be.

Hard Sell is now in theaters and on VOD.