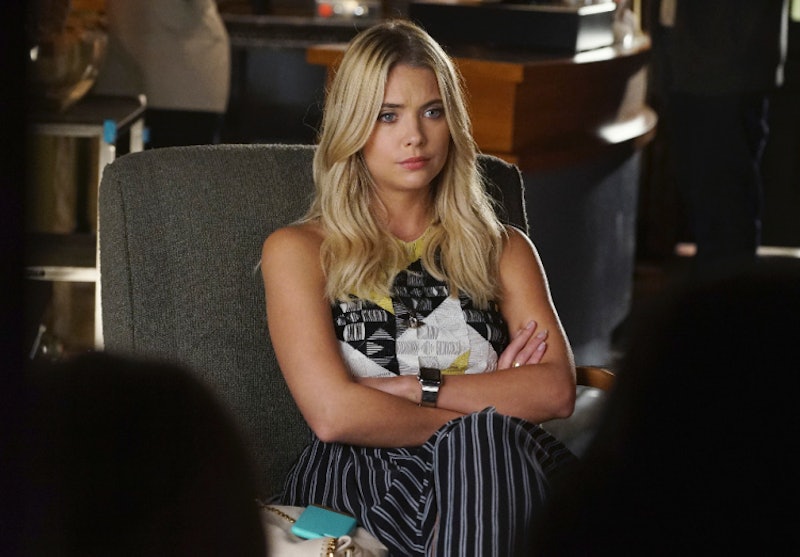 So much happened in the Season 6 finale of Pretty Little Liars that fans are still wrapping their brains around everything that went down. As expected, the Liars scheme to take down Uber A and end the diabolical game that they have been playing for years. However, it didn't go exactly as planned. Instead of capturing Uber A, the nefarious villain one-upped the Liars by kidnapping Hanna and taking her to the bell tower, the very same place where Charlotte was thrown from in the Season 6B premiere. If things weren't looking good for Hanna in the Season 6 finale, then things are absolutely getting worse now that the Pretty Little Liars Season 7 trailer has dropped. The new trailer shows a horrific image: someone with long blonde hair is dangling from the ropes in the bell tower, seemingly dead or unconscious. It certainly looks like it could be Hanna, but is this body really hers?

Let's not freak out just yet: there's one major clue that suggests Hanna's not the body in the bell tower. The clue actually comes from the trailer itself, and is something that Tumblr account ThePLLTheorist pointed out. If you watch the trailer closely, you'll see that at the 0:07 mark, someone that looks like Hanna is seemingly laying on the floor in just her underwear. That likely means that someone took off her clothes, just as Charlotte did to the Liars in the dollhouse.

Why might that have happened? According to ThePLLTheorist, it's simple: someone wanted to make the body in the bell tower look like Hanna's body. The easiest way to do this is to put the person in Hanna's clothes, and give them a wig to make it look like the Liars were staring up at Hanna's dead body.

We don't know if Hanna is the body on the ground and not in the bell tower, but it certainly makes sense. After all, are we really convinced that Hanna is dead? I certainly don't think that the show would go that far, and besides, there's one more clue in the trailer that seems to suggest Uber A has plans other than death for this Liar. Around the 0:15 mark, you can see this image, which is seemingly of Hanna looking out of a cell:

My theory? That Hanna is definitely not dead — but she's also not out of the woods just yet. Hanna might very well be in Uber A's own dollhouse, and though she's not hanging from the bell tower, we should all be very concerned about saving Hanna.