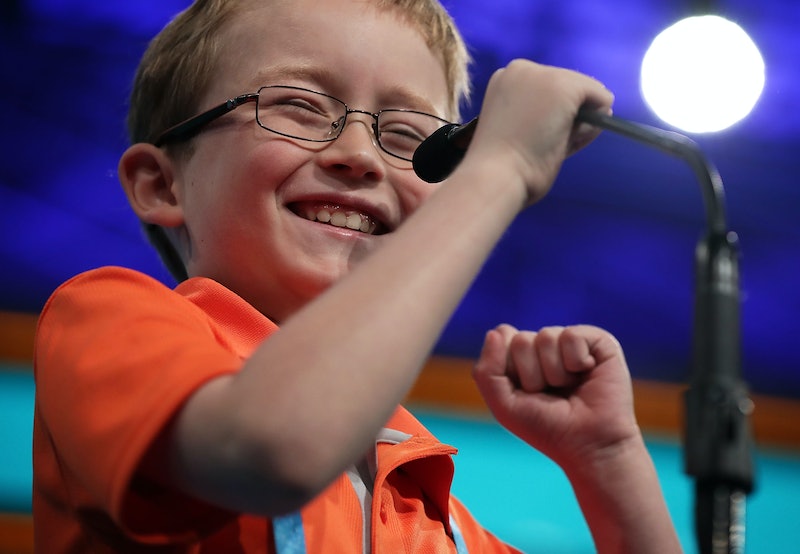 Just when you thought these super smart contestants couldn't get any cuter, the Scripps National Spelling Bee kids did the Running Man Challenge. In just one short video, they went and one-upped themselves by joining the rest of the Internet in the running-in-place sensation. They deserve to blow off some steam with everyone's new favorite dance; the 258 competitors have had several days of rigorous written and on-stage spelling tests. During Thursday evening's finale, the top 10 spellers dissected words from all across the map; some of the languages of origin were Arabic, German, Greek, Italian, French, and Japanese. So the running man was a perfect opportunity to forget about words like "cypraeiform" and let the kids be kids.

The Running Man Challenge is a viral dance trend, similar to the Harlem Shake from 2013. The challenge itself is pretty simple: perform a variation of the running man to a '90s song called "My Boo" by Ghost Town DJ's.

The craze has caught on far and wide, from local newscasters to police officers, and has even permeated to the NFL and NBA. But the most adorable version has to go to the Scripps kids, whose robotic precision in spelling was momentarily interrupted to bring you this awesome dance number:

So even though not every contestant will take home first place, which includes a a cool $40,000 cash prize, it's pretty clear they all deserve an award for the best take on the Running Man Challenge.

More like this
5 Differences Between YouTube Shorts & TikTok
By Emma Carey
For These Abortion Clinic Volunteers, Going TikTok Viral Is A Risk Worth Taking
By Audra Heinrichs
YouTuber Runs Into Margaret Sanger’s Grandson While Filming
By Alexis Morillo
This Viral TikTok Trend is Exposing Everyday Scams
By Sophia Moore
Get Even More From Bustle — Sign Up For The Newsletter