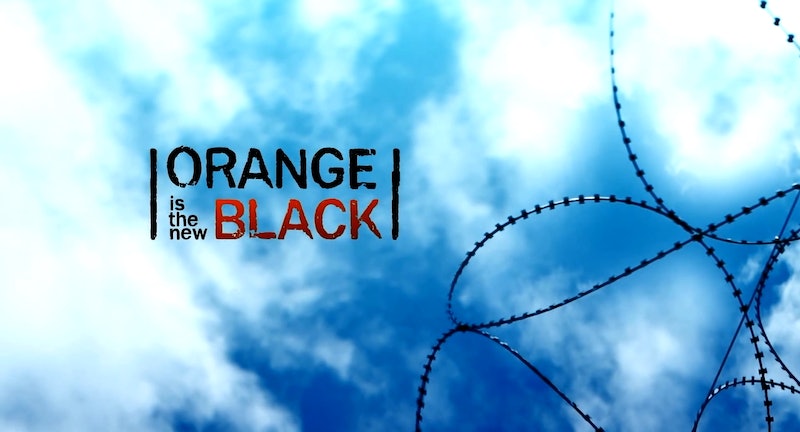 The new Netflix original series Orange is the New Black made its debut Thursday, and boy is it going to be painfully hard not to watch all 13 episodes in one sitting. The show, based on the popular memoir of the same name by Piper Kerman, revolves around the journey of Piper (played by Taylor Schilling), a young upper middle class New Yorker, who finds out that her decade-old lesbian relationship with an international drug-runner has come back to haunt her with a conviction for a year-long detention in federal prison.

In the first episode she has a good-bye party with her friends and fiancé (played by Jason Biggs), checks into prison, and starts the wild ride of integrating into a group of diverse and colorful female inmates, each of whom has her own emotional backstory.

Not only is the cast full of already-established stars, the aforementioned Taylor Schilling (Beth in The Lucky One), Laura Prepon (Donna in That '70s Show), Jason Biggs (Jim in American Pie), Natasha Lyonne (Megan in But I'm a Cheerleader), and Kate Mulgrew (Captain Kathryn Janeway in Star Trek: Voyager), but this is also the big break for a lot of great up-and-coming black and latina actresses.

One such actress is Laverne Cox, known for her reality television debut on the first season of VH1's I Want to Work For Diddy. Cox, who complains about the stereotypical roles transwomen often have to play (she said she's played a prostitute about seven times) told LA TV Insider Examiner that she finds her new character on OITNB "really the whole three-dimensional, multidimensional character that I look to play, that I want to play." She said she is "hopeful" that this show, and specifically her role in it, will open doors for other transgender actresses.

She has a point about what the public is craving. On the one hand, it's kind of unimaginable that a show about the drama of a women's prison hasn't been made yet. Who wouldn't be fascinated by the group dynamics of a group of female convicts who spend all day, every day grouped together? On the other hand, the show takes a lot of risks and breaks a lot of new ground, which will delight many viewers, but women and LGBT audiences, especially. In addition to the depth of character it portrays of underrepresented LGBT characters, it features many lesbian relationships and very realistic lesbian sex, without making it the only plot device of the show. Even shows like The L Word that became very popular for their honest depiction of lesbians still sometimes seem to survive only because of the girl on girl factor.

But that's not to say the show isn't sexy, and it appears that it's only going to become more so. In an interview with the creator of the show, Emmy Award-winner Jenji Kohan (who was also the creator of the hit comedy series Weeds), told Collider's Christina Radish, "I want more fucking, everywhere. That’s one of my things. It expresses everything. It’s comfort, it’s release, it’s brutality, it’s companionship. It’s so many things. We’re all doing it. We’re all thinking about it. We don’t see it enough ... I love the sex stuff, and I want more."

More like this
This Is When Netflix Is Going To Start Charging You For Sharing Passwords
By Darshita Goyal
'Stranger Things' Finn Wolfhard Is “Proud” Of Noah Schnapp For Coming Out
By Sophie McEvoy
The 'Freeridge' Cast Shared Their Hopes For A Potential Season 2
By Grace Wehniainen
You Might Want To Rewatch This Key 'On My Block' Scene To Understand 'Freeridge'
By Grace Wehniainen
Get Even More From Bustle — Sign Up For The Newsletter
From hair trends to relationship advice, our daily newsletter has everything you need to sound like a person who’s on TikTok, even if you aren’t.