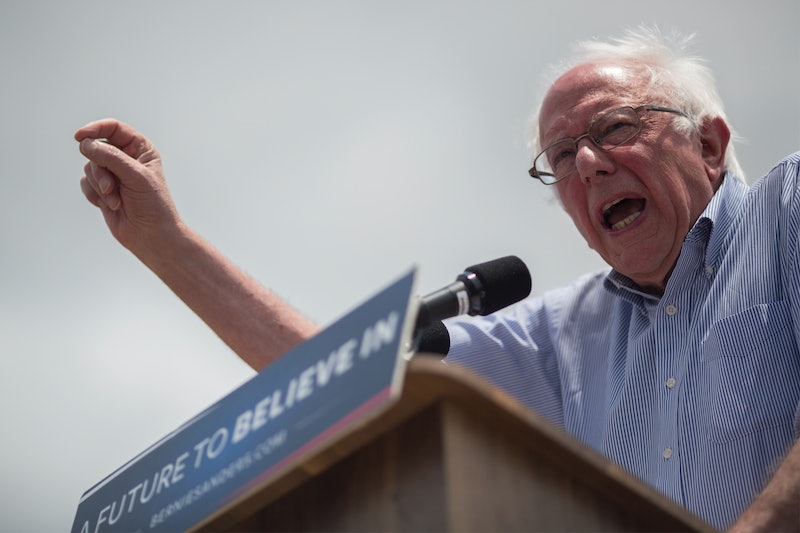 In an appearance on Jimmy Kimmel Live Wednesday, May 25, Donald Trump said he’d debate Bernie Sanders if the Vermont senator “paid a nice sum for charity.” There are a couple of reasons to suspect this will never happen, but nevertheless, the Internet is now losing its mind over the prospect of the two remaining men in the race debating each other. Accordingly, the #SandersTrumpDebateNames hashtag is a revealing look at the myriad reactions to the possibility, and many of the tweets make some surprisingly insightful points about the primary.

Although Sanders subsequently agreed to debate Trump, this is far from a done deal. For one, it’s unheard of for a party’s presumptive nominee (Trump) to debate a member of the other party who is on the cusp of losing the nomination (Sanders). Secondly, Trump said that Sanders should pony up $10 million to debate him; given that Sanders is only worth about 5 percent of that, this condition probably won’t be met. And Trump has since suggested that, he might demand as much as $15 million, which suggests that maybe he doesn’t really want to debate Sanders after all.

Nevertheless, Twitter users have started coming up with potential names for the debate, if it happens, and the suggestions offer a very interesting glimpse into how people of different stripes perceive the state of the 2016 race.

What’s interesting about these reactions is how nonpartisan they are. While some of the people using the #SandersTrumpDebateNames clearly support a specific candidate, it seems that a lot of them don’t. Some are just poking fun at the process in general, others seem to dislike both candidates equally, and some are using the occasion to make broader points about the role of race, gender, and privilege in politics.

A Trump-Sanders debate, if it ever came to fruition, would most likely hurt Hillary Clinton more than anyone else. But even if it never happens, the #SandersTrumpDebateNames hashtag will have made the mere suggestion worthwhile.

More like this
For These Abortion Clinic Volunteers, Going TikTok Viral Is A Risk Worth Taking
By Audra Heinrichs
YouTuber Runs Into Margaret Sanger’s Grandson While Filming
By Alexis Morillo
Fans Think Beyoncé’s “Break My Soul” Is Calling For A New Great Resignation
By Sam Ramsden
American Girl Doll Memes Are Going Viral On Instagram & Tiktok
By Emma Carey
Get Even More From Bustle — Sign Up For The Newsletter