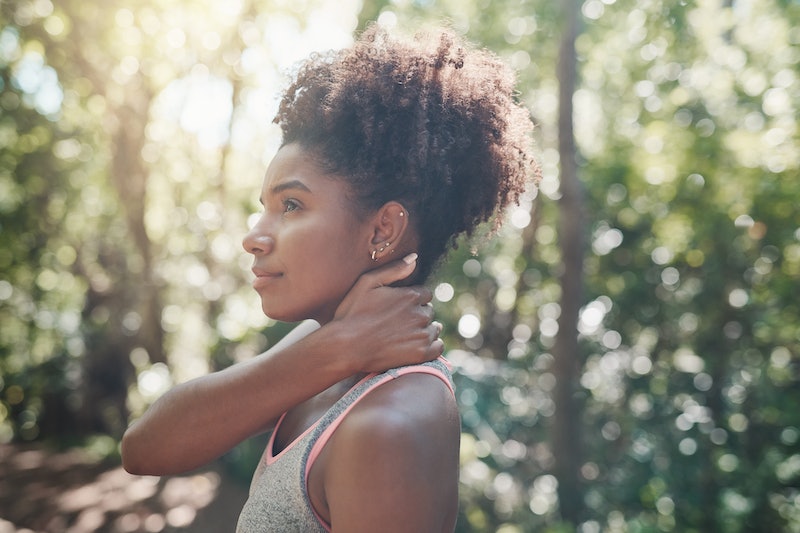 We talk a lot about mental health at Bustle, for good reason: discussing it openly, without stigma or fear, is necessary if we're going to have healthy conversations about the realities of life with non-typical psychology, as it's called. But the mental health world has its A and B listers, as with many other issues. The big hitters, like depression, anxiety, and schizophrenia, tend to dominate column inches and media portrayals, and other, less common or "riskier" issues risk drifting to the background. Sometimes, we need to bring those less talked-about mental health disorders and conditions into the limelight to correct misconceptions, raise awareness, and give them some focus. This is an attempt to do just that.

Why do mental health problems get pushed to the back of the queue? In some cases, it may be because they're seen as intensely shameful and troubling. (Yes, even in 2016.) Others are vulnerable to serious misconceptions or seen as part of bigger issues, and some are just not widely publicized, partially because they're mixed up with other disorders or with so-called "moral" issues like promiscuity. Being nuanced and attentive about mental health is a difficult undertaking, but it's worth it. Being aware of diagnoses can do something vital, too: it can give explanations to people who've never found a diagnosis that "fits" how they feel, or who think their diagnosis is shameful or bizarre.

Here are four mental health issues that should get more visibility, more solidarity, and more understanding about how they work and why. Being visible is important; it's what makes it real.

One of the points that doesn't get sufficient media coverage or attract widespread interest isn't an illness per se; it's a sector of the population. Kids get mentally ill too, but we're pretty trained as a culture to look at mental illness as something that first starts emerging in adolescence and adulthood; and while that's certainly true for some conditions, like schizophrenia, which often starts to appear in the 20s, it's definitely not the case for all of them. Our perspective on mentally ill children is pretty warped: it's either We Need To Talk About Kevin or nothing.

According to the Mental Health Foundation, a whopping 10 percent of all kids between five and 16 have some kind of "clinically diagnosable mental health problem" (i.e. a medical psychological issue rather than just "bad behavior" or "teen angst"). Part of the problem of diagnosis is that symptoms may manifest very differently in young children than they do in adults, and the Mayo Clinic explains that children often don't have the vocabulary to express their inner problems accurately. But the National Institute of Mental Health quotes research saying that half of all mental illnesses will manifest before the age of 14; and those most common in children include anxiety disorders, eating disorders, and mood disorders like depression. And there's significant stigma attached to them; a 2010 study of literature around mental illness in kids found that, as an area of mental health, it has a high incidence of shame for both children and parents.

Never heard of this? I'm not surprised. And yet it affects about 1.8 percent of the general population of America, according to statistics in the industry classic Complete Psychology . It's part of the clinical category of Cluster B personality disorders: those who, if we use the definition of the National Health Service, "struggle to relate to others... [and] show patterns of behavior most would regard as dramatic, erratic and threatening or disturbing." The other disorders in the category will likely be a lot more familiar: it includes narcissist personality disorder, borderline personality, and antisocial personality disorder — all of which are more likely to grab headlines.

So what's histrionic personality disorder? The Counseling Directory sums it up as "attention seeking behavior that often includes inappropriate seductive conduct and superficial or inflated emotions," but it can get a bit more complicated than that. Histrionic personality disorder sufferers may be accused of being "drama queens," and demand constant, 24-7 validation, attention, and focus; if they aren't given it, they act out irrationally. The condition also involves extremely shallow emotional affect, a lack of intimate boundaries, and serious issues with delayed gratification.

If you're wondering whether this sounds peculiarly gendered, you'd be right. Psychology Today pointed out in 2014 that it's much more likely to be diagnosed in women than men, even though it's likely that many men suffer from it too. But it's definitely a much more useful definition than throwing out moral accusations about "being over-sexed" or "being an emotional vampire". Still, it's currently being examined critically; the fifth edition of the Diagnostic & Statistical Manual of Mental Disorders (DSM-V) in 2012 included an extra chapter on possibly streamlining the amount of personality disorders into bigger categories instead of the "clusters". Time will tell if histrionic personality disorder remains a distinct clinical definition.

The third cluster of personality disorders, and one that the DSM thinks it will likely keep if it revises the whole category, is avoidant personality disorder — but that has a publicity problem too, partially because it masquerades as "shyness". A person with avoidant personality disorder is shy and fearful of social situations to the point of pathological, irrational behavior; the US National Library of Medicine explains that sufferers "cannot stop thinking about their own shortcomings. They form relationships with other people only if they believe they will not be rejected. Loss and rejection are so painful that these people choose to be lonely rather than risk trying to connect with others."

The key part of the disorder that makes it debilitating is "avoidance": the person in question actively rejects or avoids situations in which they may experience rejection, and takes them extremely hard. If you're noticing a crossover with social anxiety disorder, you're correct. VeryWell explains that the two often overlap, but that avoidant personality disorder is far more extreme, and more likely to result in total social isolation and reinforced patterns of negative self-esteem and hypersensitivity.

APD, as it's called, appears to crop up in around 2.4 percent of the U.S. population, if we believe statistics cited by PsychCentral. Diagnosis of avoidant personality disorders, however, is obviously difficult if the person finds it excruciating to be in social situations with doctors or psychological professionals. Treatment seems to be possible with psychotherapy, but it's time to reassess what we think about recluses and the pathologically timid.

The problem with the media portrayal of psychosis is so intense that a thesis could be written on it — and indeed has been. To be "psychotic" in normal vernacular is a shorthand for being very angry, or even just a bit weird or overemotional, and that doesn't come close to the reality of the experience. (I'm not even going to get into the sexist "psycho ex girlfriend" trope.) Psychosis, to start with, is a feature of multiple mental health conditions as well as a stand-alone issue; psychotic episodes can occur in schizophrenia, postpartum psychosis, bipolar disorder, or psychotic depression. Saying somebody is "psychotic" isn't actually revealing very much about the whole of their mental health, just that they've experienced a psychotic episode at some point — and those can get complicated, too.

Psychotic episodes come in a variety of forms. Mind, a mental health organization, classifies them into different types: hallucinations, delusions, and the flight of ideas. The distinction between hallucinations and delusions may seem subtle, but it's a matter of focus. Hallucinatory psychosis involves seeing or experiencing things and sensations that aren't there, like hearing voices. Delusional psychosis is about your personal beliefs: that you're a god, for instance, or that other people can read your mind (that's defined as paranoia). The flight of ideas, in contrast, is the propensity to move very swiftly from thought to thought, without fully comprehending or articulating them; the Kings College London Institute Of Psychiatry, Psychology & Neuroscience calls these "confused or disturbed" thoughts, and how little sense they might make to listeners if they're voiced.

It can be tricky to get good data on psychotic episodes, but one rough estimate is that two to three percent of the world population will, at some point, experience some kind of psychosis. That's roughly 140 million people, which is certainly enough of a proportion to deserve a bit more nuance in how we talk about this.

More like this
The Beauty Device Kristen Bell Uses Every Single Morning
By Carolyn Steber
An Expert Weighs In On The Viral Raw Carrot Salad Trend
By Alexis Morillo
How Ovulation Affects Your Sense Of Smell, Libido, & More
By JR Thorpe and Lexi Inks
11 Surprising Ways Thongs Can Affect Your Health
By Carolyn Steber
Get Even More From Bustle — Sign Up For The Newsletter
From hair trends to relationship advice, our daily newsletter has everything you need to sound like a person who’s on TikTok, even if you aren’t.