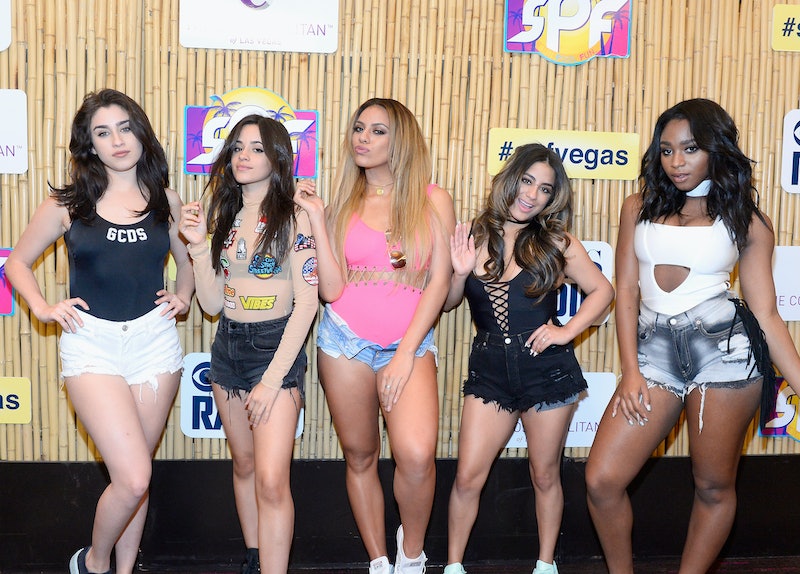 Fifth Harmony have come a long way since their days battling it out as a band on The X-Factor, and their second album 7/27 (a reference to the original date back in 2012 that they formed as a band on the music competition show) is definitely showing a group who are maturing into their own sound. Every bit as full of summer fun, flirtationm and frolics as you'd imagine, the Fifth Harmony track list for 7/27 is bursting with pop-promise, but also the musical nuances of a girl group becoming women who want to be heard, respected, and, ultimately, taken seriously for their undeniable talents.

What is most noticeable on 7/27 is how spectacular Fifth Harmony sound not as only as individual vocalists, but also as a band, able to compliment the specific cadences of each others distinctive vocal styles with harmonies that never strive to compete with each other. They're also at their strongest when you can hear how much they truly love a song, which is evident on more than a few tracks from 7/27, showcasing an authentic range of emotions or a stunning prowess for making a party song powerful. There are, unfortunately, a few songs which fall a little flat against the contagious pop brilliance of some of the other tracks, but, for the most part, Fifth Harmony have released an album which you will most definitely be hearing a lot of this summer.

Ranked from Harming Me to Harmony, here are the 13 tracks from 7/27.

I've got to be honest, this song hasn't impressed me the whole time it's had radio airplay recently. Fifth Harmony are far better than the basic, flat melody the song provides them with; these girls have supreme voices and should be given songs that really lets them flex those talents. "Work From Home" misses that mark.

Another meh moment on the album which is a little too slow and basic, leaving it feeling as though it's simply drifting off to nowhere like a helium balloon that nobody actually wants to take hold of.

Super chill with a ferociously sweet chorus vocal, it might not be the best song on the album but you definitely wouldn't want to skip it if it came on shuffle.

Girl, pass me a cocktail in a coconut, because this sounds like summer. Flirtatious, fun, and catchy, this reggae-pop slammer is full of personality. Fifth Harmony sound like they're having a ball while they perform this number which really lets their voices shine. Fetty Wap, on the other hand? Fifth Harmony could have capably carried this song without his contribution to it.

With vocals which are bursting with authenticity and feeling, the women of Fifth Harmony allow their voices to take lead on this minimalist song, which features a basic beat and melody, allowing plenty of room to let their vocal talents simply slay.

On the surface, "Dope" initially feels as standard a ballad as any, but soft, delicate vocals are used to flawlessly deliver cocky, cuss-heavy lyrics to create a cute as hell alternative love song which keeps it real. With a chorus featuring the line, "I don't know what else to say, but you're pretty f*cking dope," the song delivers casual, easy-breezy romance that is effortless to love.

Despite the fact that we've all probably heard this song at least once a day, every day, since it was released as a single back in January, it still remains a triumph of pop mastery and one of the highlights of the album.

Another supreme summer banger, "The Life" was made for listening to whilst floating across a swimming pool, sipping on a cocktail at the beach or for blasting out of a car in one of the many "road trips with the girls" that I hope you'll be taking this summer. It's a dynamite beat glazed with sugar-pop perfection.

Seriously danceable, "Scared Of Happy" is understated yet powerful, with switched up melodies which hit with precision and vocals which slay. It's also so ready for a killer remix.

Showcasing an impressive balancing act between supreme vulnerability and total, empowering strength, "No Way" is brooding and simple, sweeping gently between energized vocals and high emotions to deliver a knockout of a ballad.

Featuring interesting flows of melody and harmonies which shouldn't strictly work but definitely do, "I Lied" is overflowing with attitude and unique deliveries.

The big, bold, empowering female anthem of the album, "That's My Girl" celebrates female strength, smarts and independence to a big R&B vibe which is accented by bold horns and some gorgeous En Vogue style chorus harmonies. It's also the perfect sister song to the best song on the album...

Oh my word, this is good. There's so much sass and so much fierce happening at every level of this song that it makes you instantly delirious with get-up joy to hear it. There's also, unmistakably, some supreme '80s throwback vibes happening here with definite cadences of Prince's "1999" bursting through the seams of the song. Perhaps the song was produced as a last minute tribute to the late performer? Also, Missy Elliott: Killing it as she always does. Amazing.

After all that, I'm definitely in the mood to throw on a bikini, bomb into a pool and sip on an ice cold cocktail with some kick ass girlfriends. See you down the plaza in five, ladies.