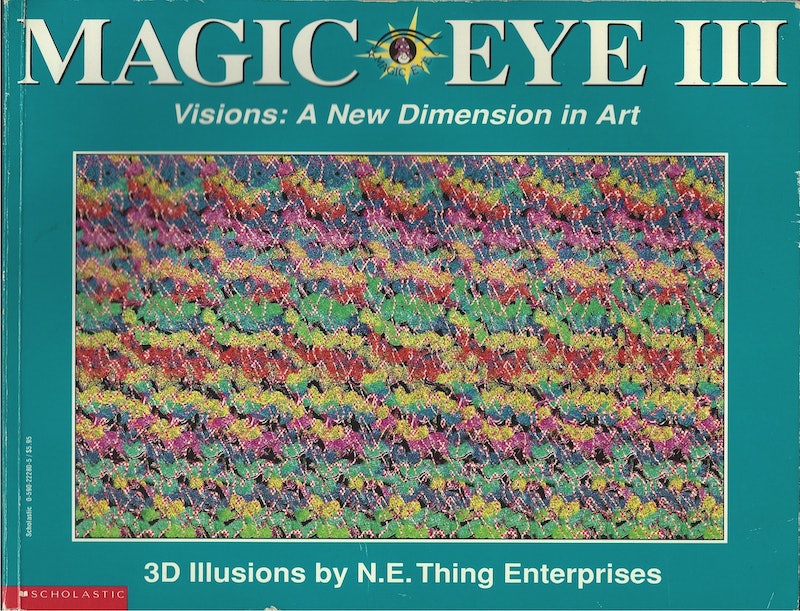 '90s nostalgia often centers around the things we did for fun: From in-line skating, to watching Disney movies on VHS, to rewriting our AOL chat profiles, those of us who grew up during the decade definitely knew how to keep ourselves entertained. One activity that still catches my attention? Figuring out how Magic Eye pictures work. You know what I mean: Those images that look sort of like a random collection of dots... until you look at them in just the right way, at which point they become a 3D dolphin or whatever. Those things. There was no greater source of pride than being able to poke your friends and shout, "I see it!" before everybody else.

Admittedly I've always had the hardest time actually seeing these things, which led me to wonder where Magic Eye pictures come from in the first place. I know they're optical illusions, and I know they make us see 3D images where there are actually only 2D pictures, but I'm not sure why or how they work. So, I did some digging to see what I could find out — and it turns out the history of about Magic Eye images and the explanation behind how they work is more fascinating than I ever thought.

The History of Magic Eye Pictures

Technically called "autostereograms," Magic Eye pictures became popular in 1959, when psychologist Bela Julesz invented them. His goal? To examine how people can see in 3D. He used a pretty basic method in constructing his autostereograms: Basically, he used created one image of uniform, randomly placed dots. Then, he'd circle one area of the dots and shift that area slightly in the second image. The idea is that if someone views the two images side by side, they perceive a "floating" circle hovering above the shifted dots, giving it a 3D effect, even though there's no depth in either image.

This finding alone pretty much blew people's minds for the next 20 years; then one of Julesz's students, Chris Tyler, along with computer programmer Maureen Clarke, discovered something even cooler in 1979: You can make autostereograms with a computer. After that, lo and behold, just in time for us '90s kids to freak out over them, engineer Tom Baccei, 3D artist Cheri Smith, and programmer Bob Salitsky created Magic Eye in 1991, building on the research that came before them.

So How Do They Work, Exactly?

Our eyes have the ability to understand something 2D as being 3D due to the depth in the image — which, in the case of Magic Eye, is provided by the two different images overlayed on each other that make up the whole. When we see a "3D" image, it isn't actually jumping out in front of us; however, our eyes "understand" that it is leaping out of the dimension because the two images laid on top of each other allow our eyes to find the difference in depth between them.

It's worth noting that our eyes technically see things from different angles; as such, they're used to making up the difference between those angles based on our depth perception. This is why people who have an astigmatism or worse vision in one eye than the other may struggle to see the image in Magic Eye pictures — their eyes have a harder time making up the difference between the angles.

How To See Magic Eye Pictures

A lot of people can pick up on these images pretty quickly, but for me, it's a real struggle. Luckily, the team over at MagicEye.com explain the technique in simple terms with an example image, saying, "Hold the center of the printed image right up to your nose. It should be blurry. Focus as though you are looking through the image into the distance. Very slowly move the image away from your face until the two squares above the image turn into three squares. If you see four squares, move the image farther away from your face until you see three squares."

Confession: I've never done the nose thing before, which might be why I've always had so much trouble seeing Magic Eye pictures. I've always just seen people look at it from a distance — but apparently some people can see the 3D effect without doing the early step of holding the picture to their nose, and I am not one of those people. This tip definitely did the trick, though. Once you see three squares, you simply hold your paper (or screen) still, and boom! the magic image appears. Pretty cool, right?

More like this
Everything To Know About 'Scream 6'
By Jack Irvin and Jake Viswanath
Alicia Silverstone Has Recreated An Iconic 'Clueless' Scene
By Frances Stewart
How To Change Your Instagram Bio
By Emma Carey
What Is A “Softboy?” The TikTok Term & Aesthetic, Explained
By Courtney Young
Get Even More From Bustle — Sign Up For The Newsletter